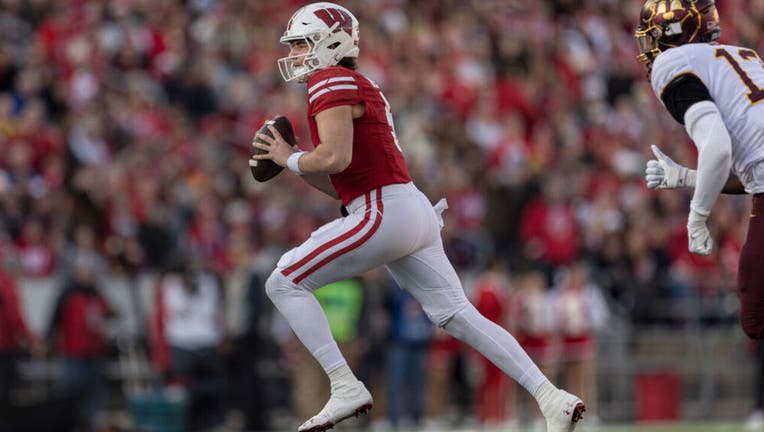 MADISON, Wis. - Athan Kaliakmanis connected with Le’Meke Brockington on a tiebreaking 45-yard touchdown with 3:40 remaining and Minnesota barely hung on in the final minute to beat Wisconsin 23-16 on Saturday.

After an injury knocked Wisconsin quarterback Graham Mertz out of the game on the Badgers’ final series, backup Chase Wolf drove the Badgers into position for a tying touchdown. A pass interference penalty in the end zone gave Wisconsin first-and-goal from the 5 with 26 seconds left.

Minnesota (8-4, 5-4 Big Ten) retained possession of Paul Bunyan’s Axe, which goes to the winner of this annual matchup. The Gophers also tied the most-played Football Bowl Subdivision rivalry — these two Big Ten foes have been facing each other since 1890 — at 62-62-8.

Wisconsin (6-6, 4-5) fell to 4-3 under interim head coach Jim Leonhard, who was promoted from defensive coordinator after the firing of Paul Chryst. Minnesota, which defeated Wisconsin 23-13 last year, has beaten the Badgers in consecutive seasons for the first time since 1993-94.

Minnesota was facing second-and-11 when Brockington ran a slant route, caught Kaliakmanis’ pass in stride inside the 35 and outran Wisconsin’s defense to the end zone for his first career touchdown. 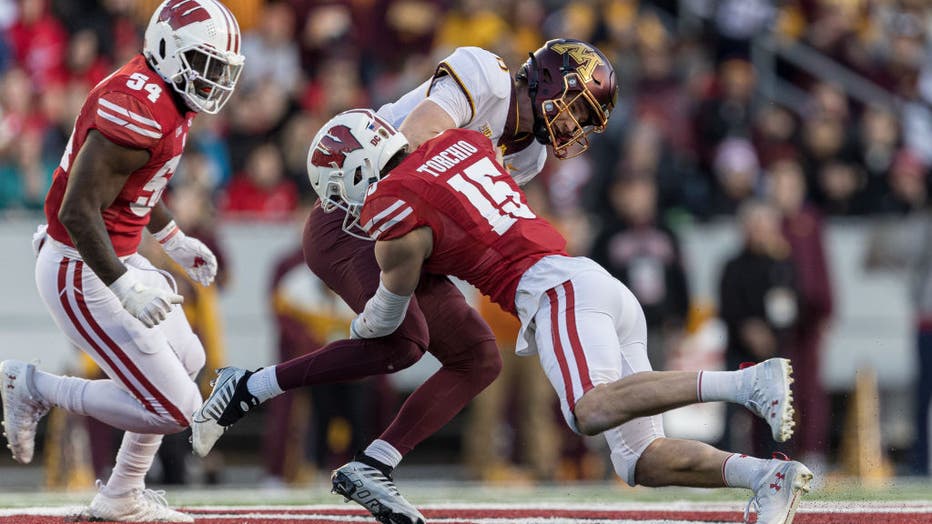 Kalikamanis ended up 19 of 29 for 319 yards with two touchdowns and no interceptions in his third game filling in for Tanner Morgan, who is out with an upper-body injury. Brevyn Spann-Ford, Dylan Wright and Daniel Jackson combined to catch 17 passes for 267 yards.

Wisconsin, which had come back from a 13-6 deficit to take a 16-13 lead late in the third quarter, couldn’t rally a second time.

Minnesota’s Justin Walley picked off a Mertz pass and had a 28-yard interception return to put the Gophers in position for a game-clinching score, but Matthew Trickett’s 48-yard field-goal attempt bounced off the right upright with 1:48 left.

That set the stage for Wolf’s comeback attempt.

This game shaped up as a duel between two of the nation’s top running backs in Minnesota’s Mohamed Ibrahim and Wisconsin’s Braelon Allen, but it didn’t quite work out that way.

Allen missed Saturday’s game after injuring his ankle a week earlier in a 15-14 victory at Nebraska. Ibrahim took a big hit in pass protection on Minnesota’s opening series and finished with 27 carries for 70 yards, the first time this season he’s been held below 100 yards.

Wisconsin won the coin toss and would receive to begin the matchup.

The Badgers got on the board with the longest field goal of the season for Nate Van Zelst – a 40-yarder. It brought the score to 3-0 Wisconsin with 9:39 left in the first quarter.

Minnesota answered with a touchdown catch by Daniel Jackson. Matthew Trickett's extra point was good, bringing the score to 7-3 with under 4 minutes left in the first. Minnesota's scoring drive included 10 plays for 81 yards.

The Badgers pulled within 1 with a 43-yard field goal by Nate Van Zelst with 8:51 left in the first half. This brought the score to 7-6 Minnesota.

Minnesota added 3 just as the first half came to a close with a Matthew Trickett 25-yard field goal, bringing the score to 10-6 Gophers at the half.

A Matthew Trickett 50-yard field goal, his longest of the year, was good, extending Minnesota's lead by 7 to 13-6 with about 11 minutes left in the third.

Nate Van Zelst's third field goal of the day, a 36-yarder, cut the Gophers' lead to 4 and the score was 13-9 with under 8 minutes left in the third.

A touchdown catch by Badgers' WR Chimere Dike put Wisconsin in the lead. Nate Van Zelst's extra point brought the score to 16-13 Badgers with under 4 minutes left in the third.

A 27-yard field goal by Minnesota's Matthew Trickett tied the game in the fourth at 16 with under 8 minutes left to play.

Le'Meke Brockington's first touchdown as a Gophers player put Minnesota up 23-16 with under 4 minutes remaining in the game.

After Graham Mertz was intercepted and Matthew Trickett's field goal attempt was no good, the Badgers were still alive with under 2 minutes remaining. Wisconsin was at the Minnesota 5 and then gained 25 yards of penalties.

The Gophers would take the axe for a second year, beating the Badgers 23-16.