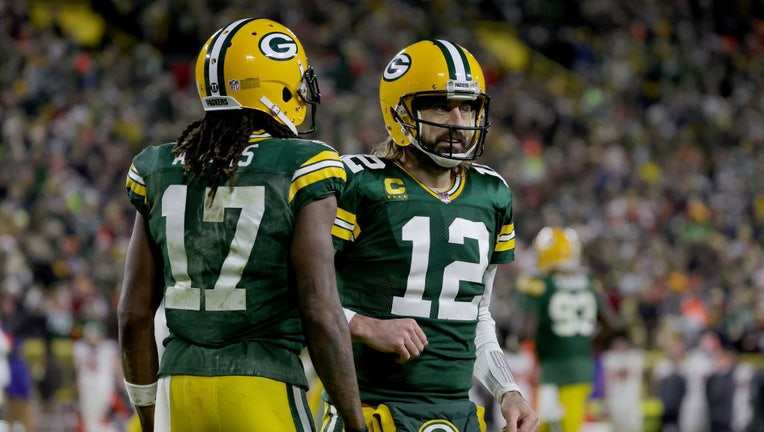 GREEN BAY, WISCONSIN - DECEMBER 25: Davante Adams #17 and Aaron Rodgers #12 of the Green Bay Packers celebrate after scoring a touchdown in the second quarter against the Cleveland Browns at Lambeau Field on December 25, 2021 in Green Bay, Wisconsin.

GREEN BAY, Wis. - Aaron Rodgers acknowledged Thursday that he decided to return to the Green Bay Packers believing he would still have All-Pro receiver Davante Adams as a teammate for the upcoming season.

The Packers announced on March 15 that Rodgers had agreed to a contract extension. Adams was traded to the Las Vegas Raiders later that week, reuniting him with former Fresno State teammate Derek Carr.

"Obviously when I made my decision, I was still thinking he was going to come back," the four-time MVP quarterback said on Pat McAfee’s SiriusXM and YouTube show. ""I was very honest with him about my plans and my future and where I saw my career going, as far as how many years I want to play. It didn’t obviously turn out that way but I have so much love for ‘Te and appreciate the time we spent together and definitely wish him the best in Derek in Vegas. But that’s a big hole to fill."

Adams’ exit leaves the Packers with a shortage of proven receivers as they chase their first Super Bowl berth since their 2010 championship season, though they have won an NFC title in each of Matt LaFleur’s three seasons as coach.

The Packers’ top returning receiver is Allen Lazard, who had 40 catches for 513 yards and eight touchdowns last season.

"It’s a tough business, it’s a wonderful profession," Rodgers said. "There’s a lot of things that happen that surprise you, even still. I thought that based on the number that we offered Davante and being able to play with me for a few more years would make a difference, but in the end I think he was ready to move on and wanted my help in making that happen.

"It was a tough position to be in, for sure, because I love him and I care about him and I want him to be happy, and he’s definitely going to be missed."

The Packers didn’t use either of their two first-round draft picks Thursday on a wide receiver and instead boosted their defense by signing a pair of Georgia teammates, taking linebacker Quay Walker 22nd overall and tackle Devonte Wyatt with the 28th pick.

Rodgers said the Packers had six wide receivers rated as first-rounders and that all of them were taken among the first 18 picks, Rodgers said. "At this point, you’ve just got to have some faith in the organization and faith that whoever we bring in tomorrow and the rest of this draft, I’m going to put in the time to make it work with those guys and we’re going to find a way in Matt’s offense to be successful like we always have."

Rodgers reiterated comments he’d made earlier by saying his relationship with Packers management has improved quite a bit since last year, when he skipped the team’s mandatory minicamp and talked about how he wanted a voice in the decision-making process.

He also praised the Packers’ decision to bring back Tom Clements as quarterbacks coach. Clements previously worked for the Packers from 2006-16

"I’m excited to get back there and get things going," Rodgers said. "We’ve got a lot to play for, a lot of exciting things."