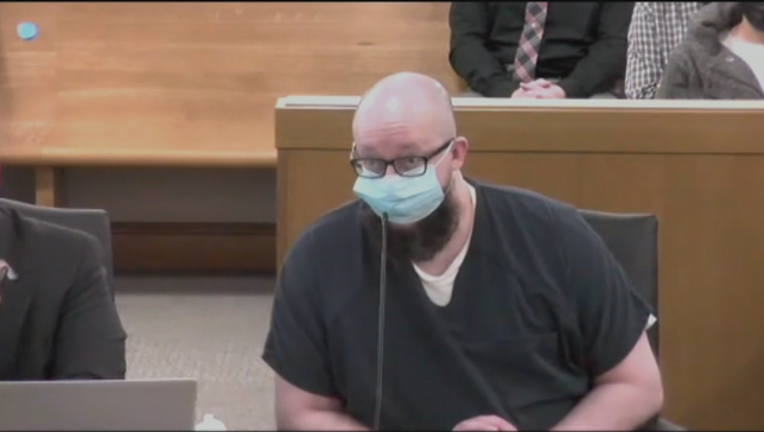 Casey Cameron addresses the court April 16, 2021, during his sentencing for the murder of Kevin "Hollywood" Hein in Neenah. (Image courtesy Winnebago County courts/Zoom)

NEENAH, Wis. - A Wisconsin man who killed a bar patron after robbing the place was sentenced Friday to 40 years in prison.

Casey Cameron, 38, pleaded no contest to felony murder-armed robbery and six counts of reckless endangerment in the October 2019 robbery of a Neenah bar and killing of Kevin "Hollywood" Hein. In exchange for his plea, which wasn't an admission of guilt but was treated as such for sentencing purposes, prosecutors reduced the original first-degree intentional homicide charge Cameron faced.

Before he was sentenced in Winnebago County Circuit Court, Cameron turned to Hein's family and apologized.

"I am so sorry for what I have done and for what took from you. And I know that I can’t take it back. If I could, I absolutely would. I don’t have anything else except my apology," he said.

"Who does that? Except a man with no conscience and no remorse for his actions," she said. "This was senseless murder, and deserves a punishment equal to the crime. Nothing will bring my brother back. My family and I feel that 60 years would be a good penalty for all of the actions he committed. Casey Cameron robbed the world of such a special person and does not deserve any sympathy. He should never walk a free man again."

"The only way that you could have slapped them in the face more is if you took a picture of yourself urinating on his grave. Going to that funeral when you killed him is not showing remorse," Woldt said.

According to prosecutors, Cameron robbed the Short Branch Saloon on Oct. 14, 2019. Hein was at the bar, made a comment and then walked out the front door despite Cameron’s demand that he not leave. Cameron took the money and followed Hein outside, where he shot him.