Comedian and actor Chris Rock dressed in all white kicked off his Wednesday night show after a thunderous three-minute standing ovation at his first standup show since Will Smith slapped his face at the Oscars Sunday night.

New details have emerged surrounding the question of why Will Smith wasn’t removed from the 94th Academy Awards following his viral smacking of Chris Rock.

The Academy of Motion Pictures Arts and Sciences on Wednesday said that Will Smith was asked to leave Sunday's Oscar ceremony after striking Rock but, they claim, he refused to do so.

"Jada, ‘GI Jane 2,’ I can’t wait to see it," Rock said on stage in front of the Oscars audience, including to an unhappy Pinkett Smith.

The actress has been publicly outspoken about how she deals with alopecia – an autoimmune condition that causes hair loss. Pinkett Smith said she shaved her head in order to own her diagnosis and mitigate its impact on her mentally. Pinkett’s daughter, Willow Smith has also buzzed her head in solidarity with her mother. 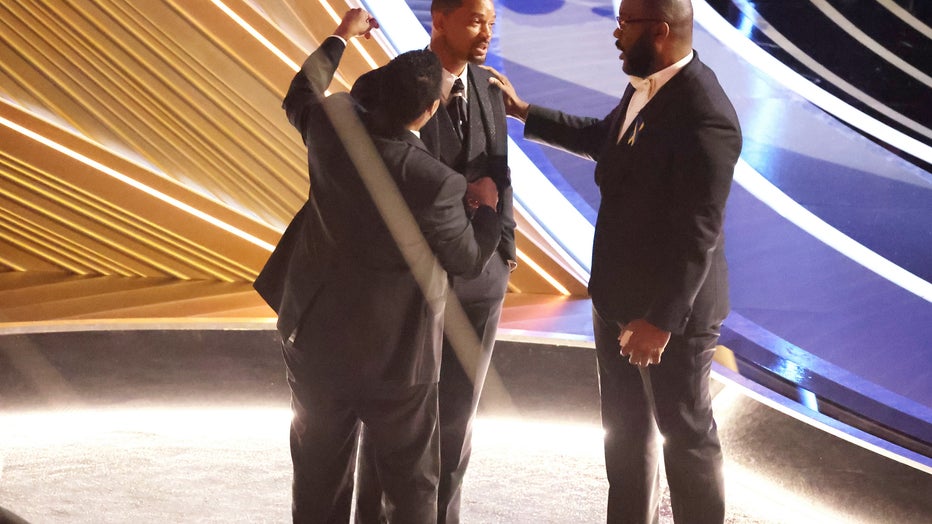 Smith then walked briskly to the Oscars stage and slapped Rock.

"Wow, Will Smith just smacked the s--t out of me," Rock said before entering into a verbal back-and-forth with the "Ali" actor.

HOWARD STERN, JUDD APATOW, OTHER COMEDIANS DEFEND CHRIS ROCK: 'HE HANDLED IT LIKE A PRO'

"Keep my wife's name out your f---ing mouth," Smith could be heard yelling following the physical altercation.

In fact, within the hour, as the "Made in America" performer took home the best actor award for his portrayal of Venus and Serena Williams’ father, Richard Williams in "King Richard," Smith was welcomed to the Oscars stage with a standing ovation from his Hollywood peers. 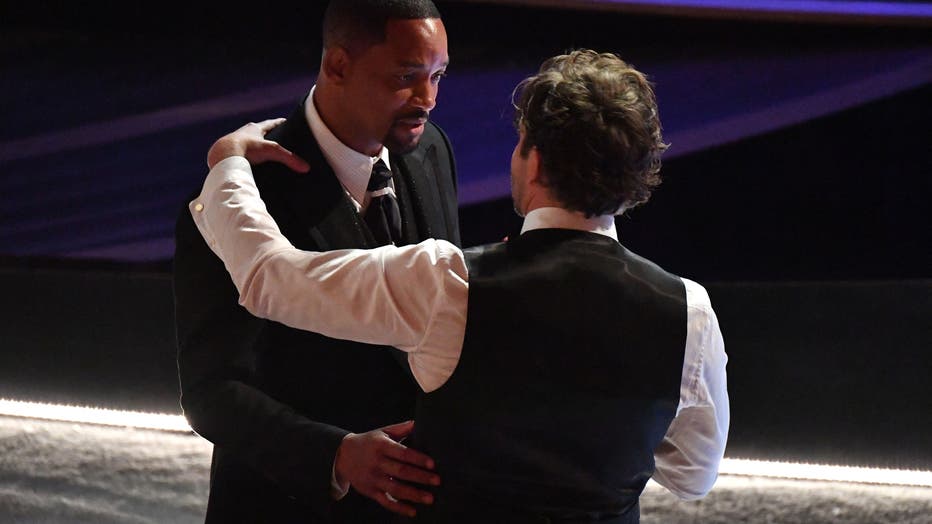 US actor Will Smith (L) speaks with US actor and director Bradley Cooper during the 94th Oscars at the Dolby Theatre in Hollywood, California on March 27, 2022. (Photo by Robyn Beck / AFP) (Photo by ROBYN BECK/AFP via Getty Images)

Smith was consoled by A-list peers

Images captured that night after the physical encounter showed Smith being consoled by the likes of A-listers Bradley Cooper, Tyler Perry and Denzel Washington.

Meanwhile, on stage support came from Samuel L. Jackson, John Travolta and Uma Thurman as Smith walked up to accept his honor.

While delivering his acceptance speech, the actor pressed through tears that Washington told him, "At your highest moment, be careful — that’s when the devil comes for you." 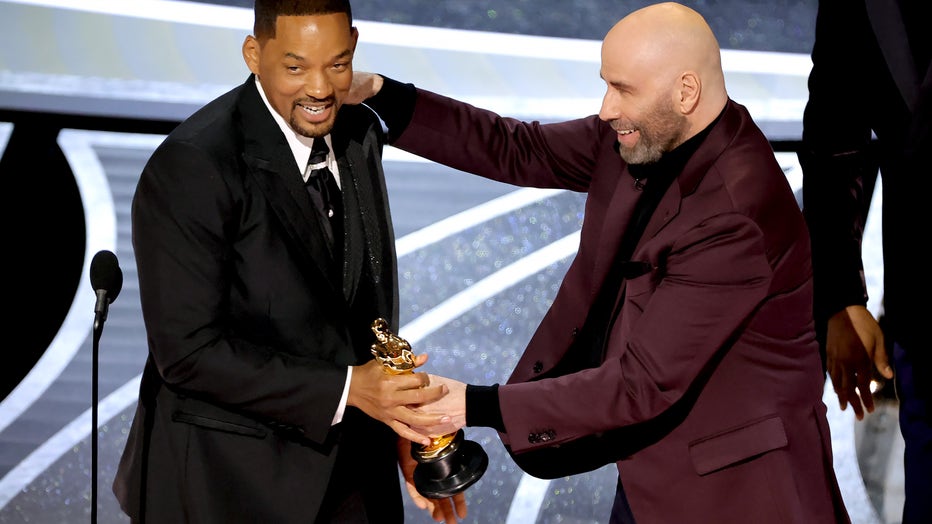 HOLLYWOOD, CALIFORNIA - MARCH 27: (L-R) Will Smith accepts the Actor in a Leading Role award for ‘King Richard’ from John Travolta onstage during the 94th Annual Academy Awards at Dolby Theatre on March 27, 2022 in Hollywood, California. (Photo by Ne

Following his win, Smith was also seen at an Oscars after-party with his A list family, partying with his Oscar trophy and singing along to his own music.

Not everyone was OK with Academy allowing Smith to accept Oscar

However, not everyone was OK with the fact that Smith was not only allowed to remain in the famed Dolby Theatre after the assault, but many notable celebrities expressed their distaste for the moment and disappointment at the Academy for letting the "Independence Day" star accept the award.

Howard Stern went on to defend Rock saying, "Poor Chris Rock is a comedian and just trying to get through the day to make the f---ing people laugh at that horrible ceremony." 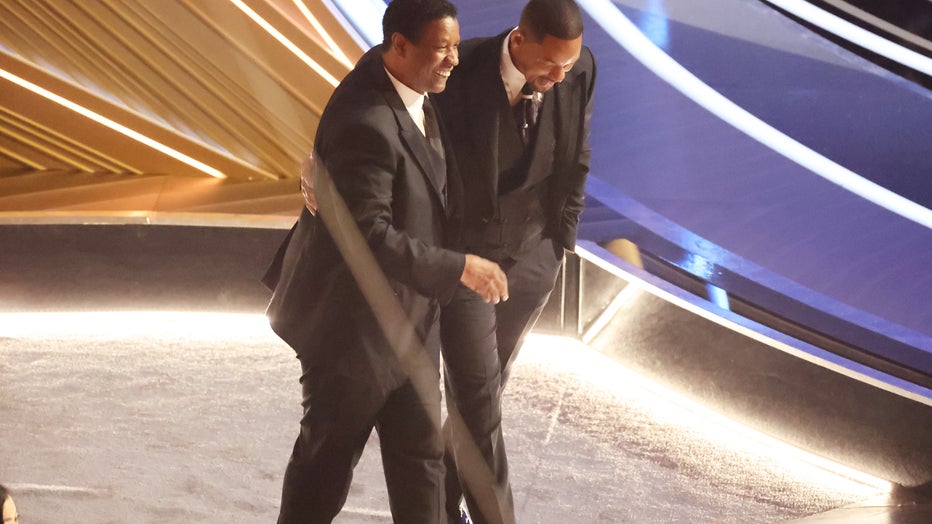 Kathy Griffin and Joe Rogan both expressed concern over the precedent that Smith's actions set and what it means for comedy clubs in the future.

"Let me tell you something, it's a very bad practice to walk up on stage and physically assault a Comedian," Griffin wrote via Twitter. "Now we all have to worry about who wants to be the next Will Smith in comedy clubs and theaters." 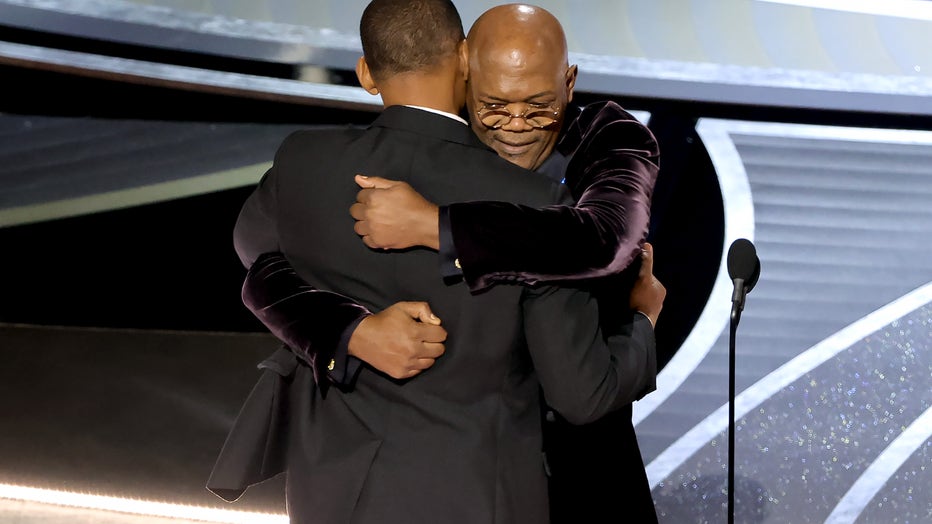 HOLLYWOOD, CALIFORNIA - MARCH 27: (L-R) Will Smith accepts the Actor in a Leading Role award for ‘King Richard’ from Samuel L. Jackson onstage during the 94th Annual Academy Awards at Dolby Theatre on March 27, 2022 in Hollywood, California. (Photo b

In the days after the smack, actor and comedian Jim Carrey also slammed Hollywood for rewarding Smith with a standing ovation mere moments after his onstage outburst.

"I was sickened. I was sickened by the standing ovation," the "Liar Liar" performer told Gayle King on "CBS Mornings."

THE ACADEMY ‘UNLIKELY’ TO ‘WEAPONIZE’ WILL SMITH SLAPPING CHRIS ROCK AND STRIP HIM OF OSCAR, EXPERT BELIEVES

"I felt like Hollywood is just spineless en masse, and it just – it really felt like, 'Oh, this is a really clear indication that we're not the cool club anymore,'" Carrey added. 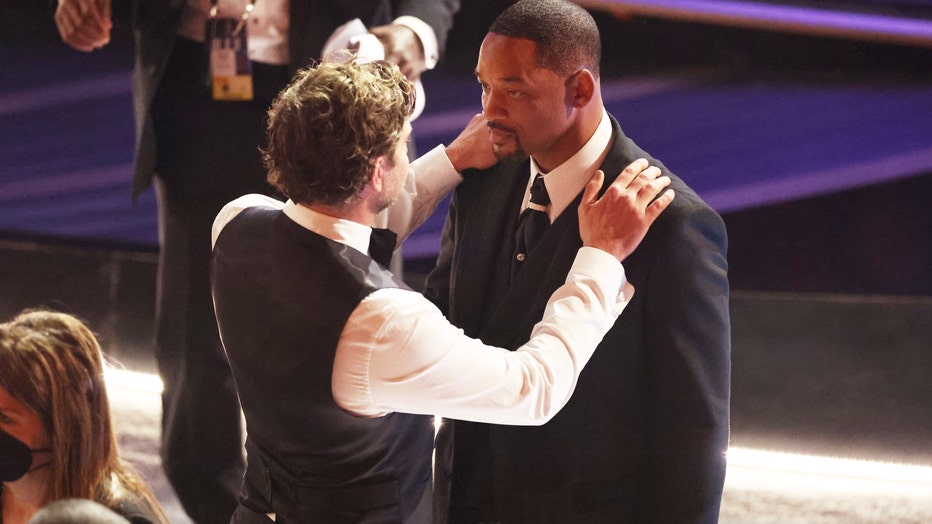 King probed Carrey on Rock’s decision not to press charges against the "Ali" star for the literal slap in the face, and from Carrey’s point of view, Rock simply doesn’t "want the hassle" that comes with filing a police report along with the subsequent media barrage. But Carrey added that had he been in Rock’s position, an expensive lawsuit would have been swift. 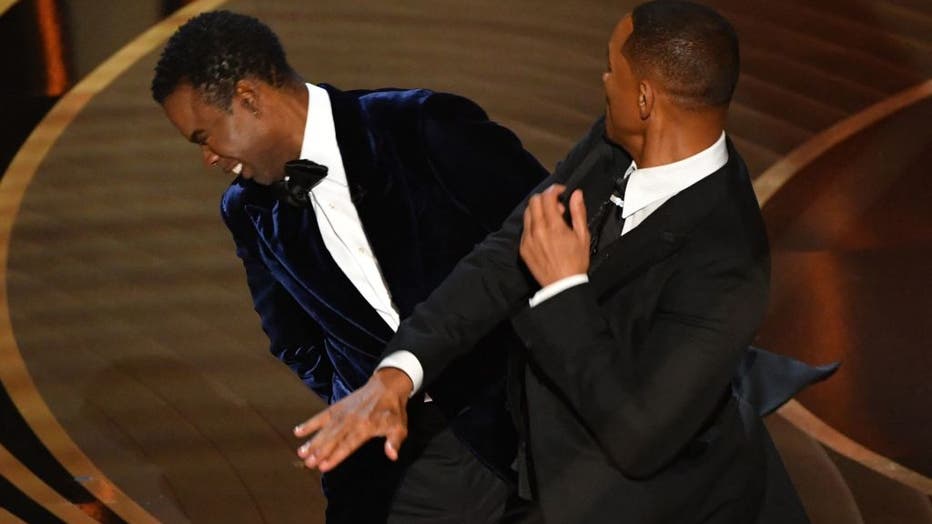 TOPSHOT - US actor Will Smith (R) slaps US actor Chris Rock onstage during the 94th Oscars at the Dolby Theatre in Hollywood, California on March 27, 2022. (Photo by Robyn Beck / AFP) (Photo by ROBYN BECK/AFP via Getty Images)

"I'd have announced this morning that I was suing Will for $200 million because that video was going to be there forever," said Carrey. "It's going to be ubiquitous. You know, that insult is going to last a very long time. If you want to yell from the audience and disapprove or show a disapproval or say something on Twitter or whatever – you do not have the right to walk up on stage and smack somebody in the face because they said words."

Comedian Wanda Sykes – who was a co-host at Sunday's Oscars ceremony – also criticized the Academy for allowing Smith to accept his Oscar statue, calling the decision, "gross."

"It was sickening. It was absolutely – I physically felt ill, and I'm still a little traumatized by it," Sykes added. "For them to let [Will Smith] stay in that room and enjoy the rest of the show and accept his award – I was like, ‘How gross is this? This is just the wrong message.'"

"You assault somebody, you get escorted out the building and that's it," she pressed. "But for them to let him continue I thought it was gross." 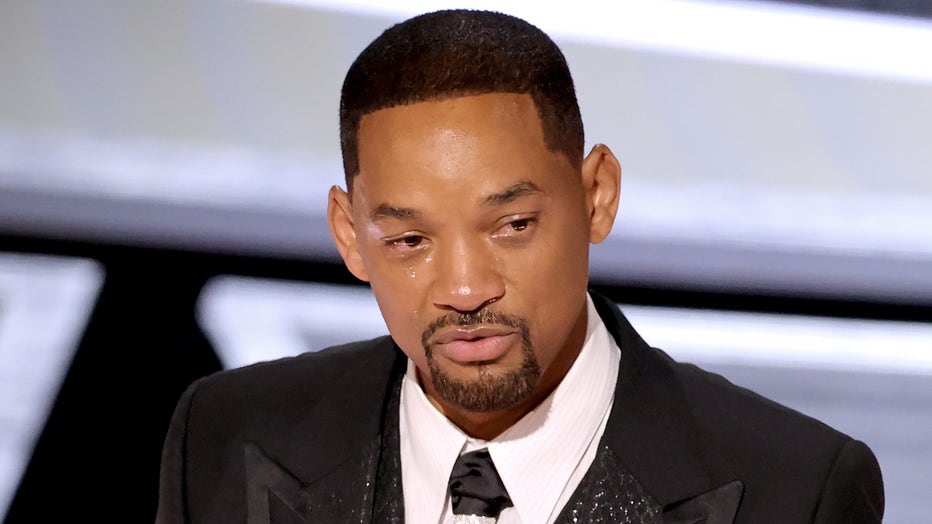 HOLLYWOOD, CALIFORNIA - MARCH 27: Will Smith accepts the Actor in a Leading Role award for ‘King Richard’ onstage during the 94th Annual Academy Awards at Dolby Theatre on March 27, 2022 in Hollywood, California. (Photo by Neilson Barnard/Getty Image

Sykes’ fellow co-host, Amy Schumer also lamented the intense moment on Wednesday after she took a few days to collect her thoughts on what went down.

"Still triggered and traumatized," Schumer wrote alongside a photo of herself. "I love my friend @chrisrock and believe he handled it like a pro. Stayed up there and gave an Oscar to his friend @questlove and the whole thing was so disturbing," she continued. "So much pain in @willsmith anyway I'm still in shock and stunned and sad."

"Im proud of myself and my cohosts. But yeah. Waiting for this sickening feeling to go away from what we all witnessed."

"The Academy condemns the actions of Mr. Smith at last night’s show," the statement from the Academy read. "We have officially started a formal review around the incident and will explore further action and consequences in accordance with our bylaws, standards of conduct and California law." 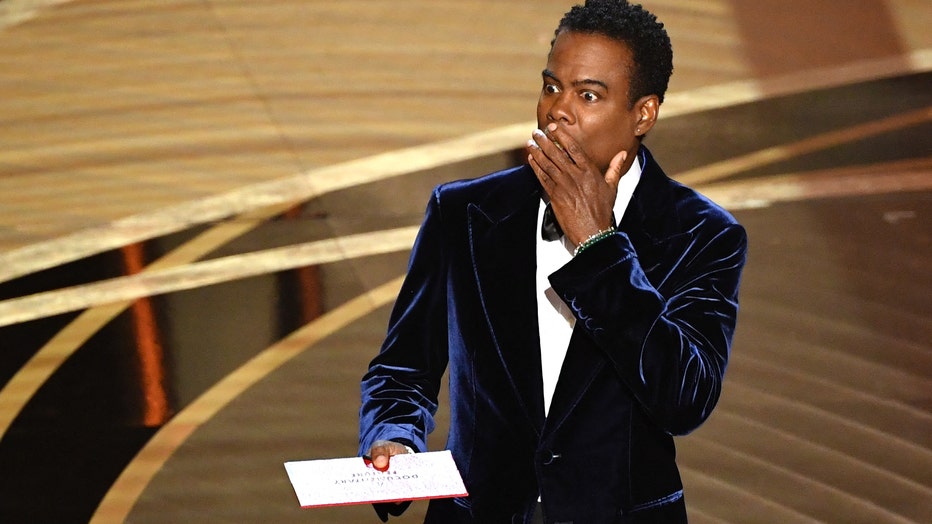 TOPSHOT - US actor Chris Rock speaks onstage during the 94th Oscars at the Dolby Theatre in Hollywood, California on March 27, 2022. (Photo by Robyn Beck / AFP) (Photo by ROBYN BECK/AFP via Getty Images)

On Wednesday night in his first standup comedy show since the slap, Rock hit the stage to a thunderous three-minute standing ovation from a sold-out room of attendees.

"How was your weekend?" Rock asked the crowd at the Wilbur, a theater of 1,200 seats in South Boston during his "Chris Rock Ego Death World Tour 2022" outing.

"I had a whole list of jokes before this week happened," the funnyman quipped of the retrospective moment before admitting he was "still kind of processing what happened" that infamous night.

The board of governors met on Wednesday to discuss possible disciplinary action against Smith.

LINK: Get updates and more on this story at FOXNews.com