ATLANTA — Pleading through grief and tears Monday, the family of a black man killed by Atlanta police outside a fast-food drive-thru called on protesters to refrain from violence and demanded changes in the criminal justice system to prevent such deaths.

An autopsy found that 27-year-old Rayshard Brooks was shot twice in the back late Friday by an officer trying to arrest him for being intoxicated behind the wheel of his car. Brooks tried to flee after wrestling with officers and grabbing a Taser from one of them.

"Not only are we hurt, we are angry,” said Chassidy Evans, Brooks’ niece. “When does it stop? We’re not only pleading for justice. We’re pleading for change.”

About 20 of Brooks’ children, siblings, cousins and other family members sobbed openly at a news conference as more than 1,000 people gathered not far away for an NAACP-led protest outside the Georgia Capitol. 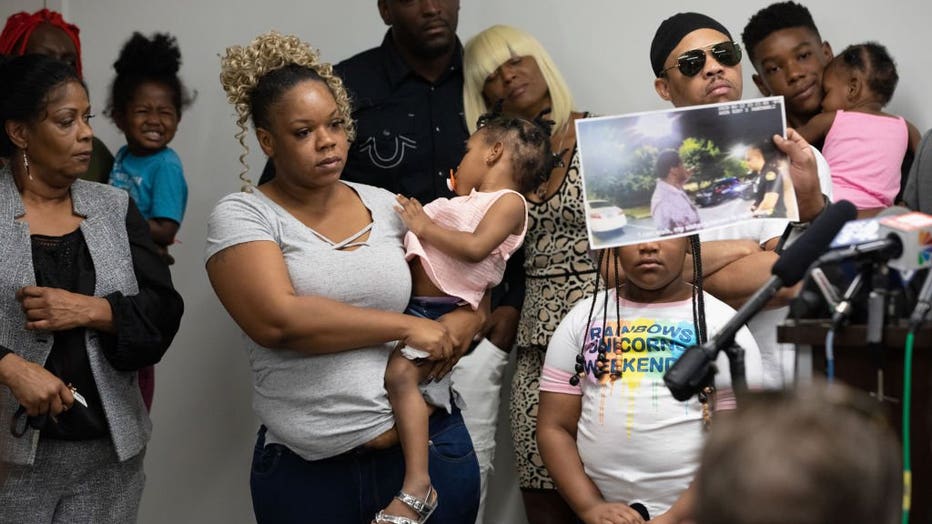 ATLANTA, GA - JUNE 15: Rayshard Brooks widow Tomika Miller holds one of her daughters as family lawyers speaks to media on June 15, 2020 in Atlanta, Georgia.Ruled a homicide, Rayshard Brooks died while fleeing from two white police officers outside a

The killing has rekindled protests in Atlanta that erupted in the wake of George Floyd’s death in Minneapolis. The Wendy’s restaurant where Brooks was shot was burned down over the weekend.

Evans said there was no reason for her uncle “to be shot and killed like trash in the street for falling asleep in a drive-thru.”

"Rayshard has a family who loves him who would have gladly come and got him so he would be here with us today,” she said.

Relatives described Brooks as a loving father of three daughters and a stepson who had a bright smile, a big heart and loved to dance. His oldest daughter learned her father was slain while celebrating her eighth birthday with cupcakes and friends, wearing a special dress as she waited for Brooks to take her skating, said Justin Miller, an attorney for the family.

“There’s no justice that can ever make me feel happy about what's been done," said Tomika Miller, Brooks' widow. "I can never get my husband back. ... I can never tell my daughter he’s coming to take you skating or for swimming lessons.”

She asked those demonstrating in the streets to “keep the protesting peaceful,” saying: “We want to keep his name positive and great.”

The NAACP protest took place as lawmakers were returning to work after a three-month coronavirus shutdown.

Several Democratic lawmakers joined protesters and called for Georgia to pass a hate-crimes law as well as a slate of other reforms, including the repeal of the state's citizen's arrest and stand-your-ground laws. Republican leaders pushed back against swift action.

Morgan Dudley, 18, skipped work to join the Capitol demonstration after her job kept her from joining prior Atlanta protests in the wake of Floyd's death. As those protests started to die down, she said, she feared the message would be lost.

“I was like, ‘You know what, this is not a trend. This is an actual problem that we’re facing,’" said Dudley, who is black. "So I called out of work to be here today.”

Officer Garrett Rolfe, who fired the shots that killed Brooks, has been fired, and the other officer at the scene, Devin Brosnan, has been placed on administrative duty. Police Chief Erika Shields resigned a day after the shooting.

Fulton County District Attorney Paul Howard said he hopes to decide by midweek whether to charge either of the officers. The Georgia Bureau of Investigation was put in charge of the investigation.

Brooks was shot after police were called amid complaints that a car was blocking the drive-thru lane. An officer found Brooks asleep in the car.

Video from the two officers' body cameras and dash-mounted cameras on their cruisers showed Brooks cooperating for more than 40 minutes, telling them he had had a couple of drinks while celebrating his daughter's birthday and consenting to a breath test.

The video shows Brooks' alcohol level at 0.108 percent — higher than Georgia's legal limit of 0.08. When one of the officers moves to handcuff him, Brooks tries to run and the officers take him to the ground. Brooks grabs Brosnan's Taser and starts running again.

Footage from a Wendy’s security camera showed Brooks turn and point an object at one of the officers, who opens fire.

“As I pursued him, he turned and started firing the Taser at me,” Rolfe told a supervisor after the shooting in a videotaped conversation. “He definitely did shoot it at me at least once.”

Georgia House Minority Leader Bob Trammell, a Democrat, said: “For the General Assembly to turn a deaf ear to the cries that are occurring all over Georgia and throughout the country would be a tragic missed opportunity and a dereliction of responsibility.”