MILWAUKEE— It's a special fee that has drivers especially angry, and a powerful city alderman exploring official action. The FOX6 Investigators learned some towing companies may be charging more than state law allows for hauling cars off of private property.

If you are parked on private property without permission, towing companies have every right to haul your car away, but state law sets limits on how much they can charge. The FOX6 Investigators found some companies are testing the limits of the law by charging a special fee that nearly doubles the cost of the tow.

If you park on private property in Wisconsin without permission, it doesn't matter how long you've been there. A tow truck can haul your car away immediately, but state law limits how much towing companies can charge to get your car back. 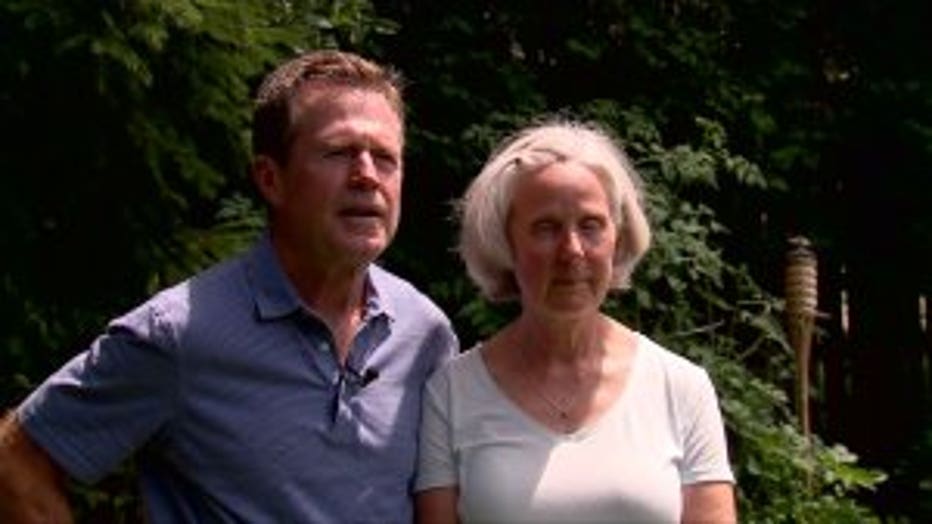 Kevin Ryan and his wife, Karen Schmitting, say they "got taken" after a towing company charged them for special equipment that our hidden cameras show was never used.

Kevin Ryan and his wife, Karen, said their son parked their car in the Walgreens parking lot near Brady and Farwell overnight on June 27 because he didn't want to drive home impaired. It was gone the next morning.

"'Dad, Mom, got some bad news,'" Kevin Ryan recalled his son saying on the phone.

The news got worse when the tow company handed them a bill for $348.48 -- including $125 for the use of special equipment.

"They used the special equipment to tow the car, to make sure they don't damage it," Karen Schmitting said.

At least, that's what Always Towing told them.

The couple did not know at the time that the FOX6 Investigators were watching as their car was being impounded. Our hidden cameras captured an Always Towing worker loading their 2009 Toyota Corolla onto a flatbed truck with what appeared to be nothing more than a standard tow chain. The left rear wheel could be seen slowly rolling along the pavement as the front wheel skidded up the ramp. There was no sign of any special equipment being used.

"It means we were charged for something that wasn't necessary. We got taken," Schmitting said.

"Well, we got charged for something they didn't do," Ryan said.

It raised the question, how often is this happening to others? The FOX6 Investigation found tow companies all over the city are routinely charging for the use of special equipment, driving up towing bills to $350 or more.

"I was kind of just shocked," said Josh Guarisco, who was towed from his girlfriend's Waukesha apartment complex.

"I wanted to cry," said Kristy Pfenning, towed from a Milwaukee apartment complex.

"I did not have $350 just to give away," Eusheia Edwards said through tears, after getting towed from a handicapped space while grocery shopping. She said she'd forgotten to display her handicapped placard. 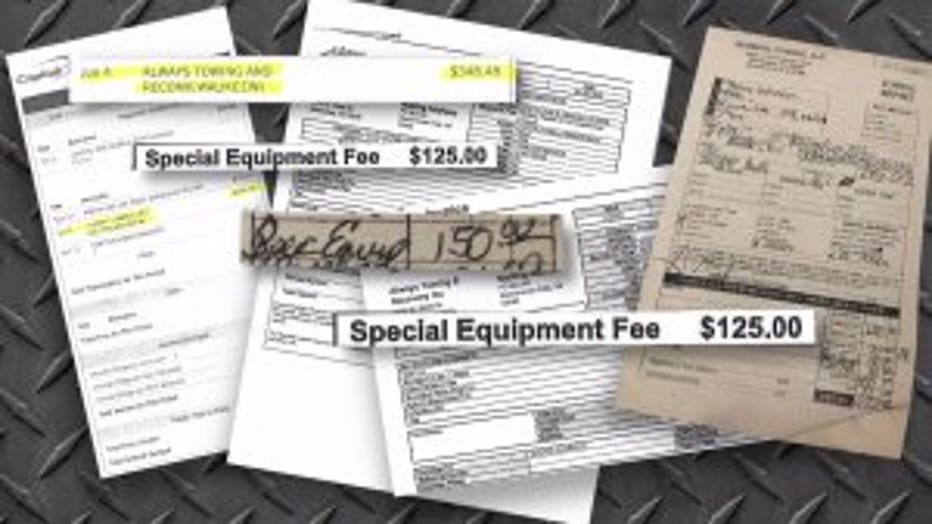 All of those drivers were charged $350 or more to get their vehicle back, just minutes or hours after the tow. All were charged "extra" fees for the use of special equipment (or, in one case, labor).

"We are looking into it," said Alderman Nik Kovac, chairman of the Licenses Committee, which regulates towing companies in Milwaukee.

"It looks like there could be a pattern of some companies trying to double the charge basically every time," Kovac said.

According to state regulations, the most a towing company can charge for a non-consensual, private property tow is $150, plus some additional fees, including:

That last fee has become the most controversial.

"There are certain circumstances that require additional equipment or even a different truck," said Dan Johnson, administrator of the Wisconsin Towing Association.

Johnson was part of the debate process that established the maximum fees.

"There actually has to be some special circumstance," Johnson said.

"Only in special and unusual circumstances," Kovac said. 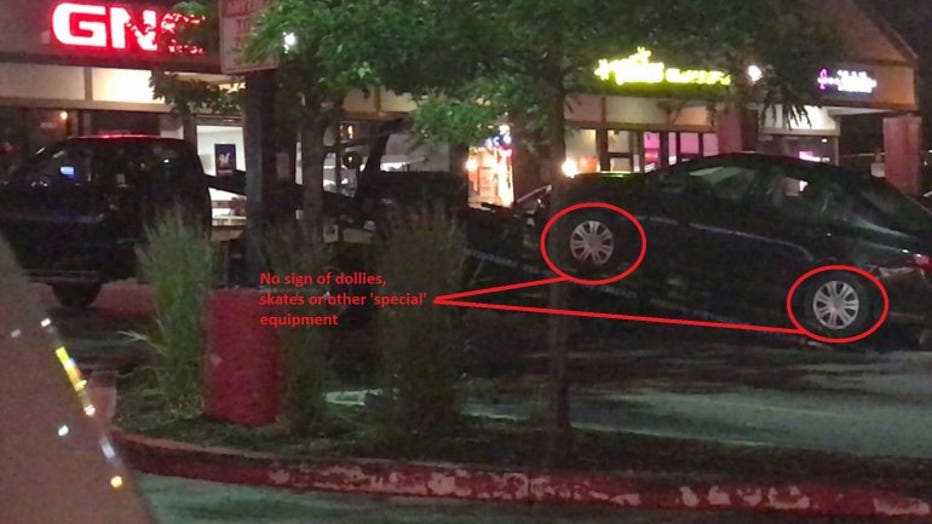 Our hidden cameras record as Always Towing hauls away Kevin Ryan's 2009 Toyota Corolla. Ryan was charged $350, including a special equipment fee of $125 for equipment that apparently wasn't used or needed.

The Wisconsin Department of Transportation regulations don't say exactly what type of equipment constitutes "special equipment," but they do say the fee can only be charged if one of three circumstances exist:

"If it's blocked in in a certain way, your normal tow truck can't back in," said Mike Maistelman.

He's an attorney for Always Towing, which tows far more cars from private property in Milwaukee than any other company. According to data maintained by the City of Milwaukee Department of Public Works -- and obtained by FOX6 News through an open records request -- Always Towing and its sister company, 24 Hour Towing, impounded 9,356 vehicles in 2018 alone.

Maistelman said it's their responsibility to tow those cars safely.

"There's guidelines so that the vehicle doesn't get damaged," Maistelman said. 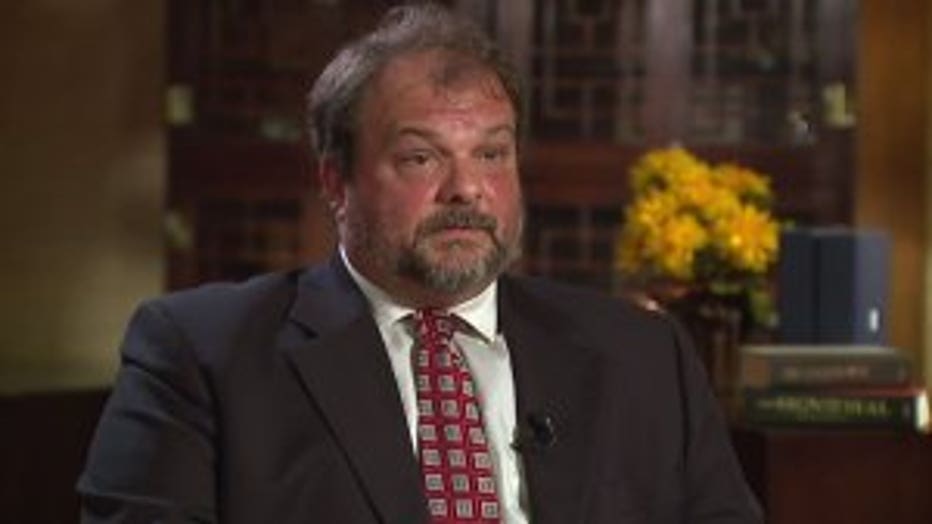 Mike Maistelman, attorney for Always Towing, says they have to use special equipment when a vehicle's keys are not present to avoid damaging the transmission. He did not explain why no such equipment can be seen in the towing of Kevin Ryan's car, for

Maistelman said things like wheel dollies, Go Jaks, skates, or other "special" types of equipment are sometimes needed to load a car without damaging the transmission.

So how often do they charge the special fee? When the company was up for license renewal in Milwaukee in 2018, Alderman Kovac asked that very question, and the company's general manager replied, "Special equipment is used when a vehicle does not have keys."

“When you don’t have keys," Kovac said. “So that would be every time you’re doing a hostile tow, right?”

“Pretty much," an unidentified person said.

“That would be all the tows you do that aren’t, ‘My car broke down. Please come get it,’ right?" Kovac asked. "Any time you’re towing cars off lots for being illegal parked, you’re not going to have their keys.”

“If it’s illegally parked and you do not have the keys, yes," Tarantino said.

“So every time there’s an illegally-parked car, you are charging for special equipment?" Kovac asked.

“We have to use special equipment to tow the vehicle," Tarantino replied.

When asked about that exchange last month, Kovac said, "Every tow is special. Every tow is unusual. That should not be the standard operating procedure of any tow company."

In a sit-down interview with FOX6 Investigator Bryan Polcyn, Maistelman repeated the claim that special equipment is needed when the tow truck operator does not have keys to the vehicle being towed, because manufacturers' guidelines recommend it.

"How does not having a key have anything to do with spatial constraints?" Polcyn asked, referring to the exception allowed in the law.

"Again, we have to follow the manufacturer's recommendations for when we tow a vehicle," Maistelman said.

"That's not what the law says," Polcyn said.

"That's fine. That's fine," Maistelman replied. "But that is our interpretation."

The Wisconsin Towing Association administrator has a different interpretation.

"I don't believe that was the intent," Dan Johnson said.

It's not just Always Towing charging extra fees. Brew City Towing charged Eusheia Edwards an extra $118 for labor, even though state law does not allow towing companies to charge for labor.

General Towing charged Mary Johnson $422, including $35 a day for two days of indoor storage, even though she got cellphone video showing her car stored outside. She also said the business was closed on Sunday and would not allow her to retrieve her car. State regulations do not allow tow companies to charge for storage on days they are not open at least four hours to retrieve their vehicle, but what upset Johnson the most was the $150 charge for the use of special equipment -- specifically, "GoJaks" and "skates." 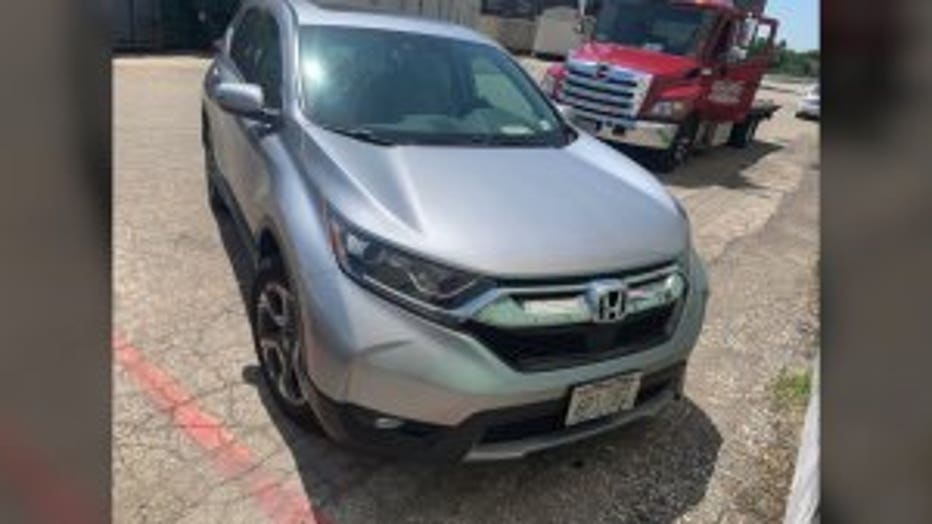 Photos provided by General Towing show Mary Johnson's car parked illegally, but do not show anything blocking her in. The company has not explained why she was charged for the use of special equipment or why such equipment was necessary.

Pictures of her car provided by General Towing showed the vehicle was parked by itself, without any other vehicles or objects blocking the tow truck's access.

General Towing declined a request from the FOX6 Investigators for an interview, instead directing FOX6 to speak with their attorney.

"Look him up," a company rep said on the phone.

Turns out, their attorney is also Maistelman, something the FOX6 Investigators discovered during the interview about Always Towing.

"You did a really good job finding me," Maistelman said, extending his right hand for a lighthearted shake.

He promised to look into why General Towing charged Mary more than $400, but (as of the publication date), he had not done so.

He also promised to look into one more thing. 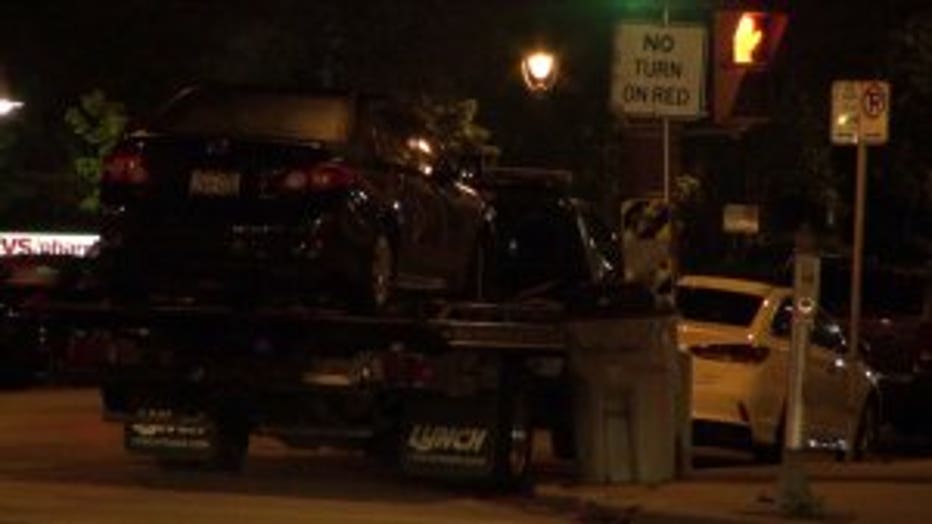 Always Towing truck is parked at the corner of Brady and Farwell, still running, in a no parking zone.

Just after pulling out of the Walgreens parking lot with Kevin Ryan's car on June 27, FOX6's cameras showed the Always Towing driver parking his tow truck at the corner of Brady and Farwell. He left the truck running in a no parking zone. That's right. A tow truck driver hauling an illegally parked car, parked illegally while he ran into the The Dogg Haus -- a Brady Street hot dog restaurant -- to get something to eat. 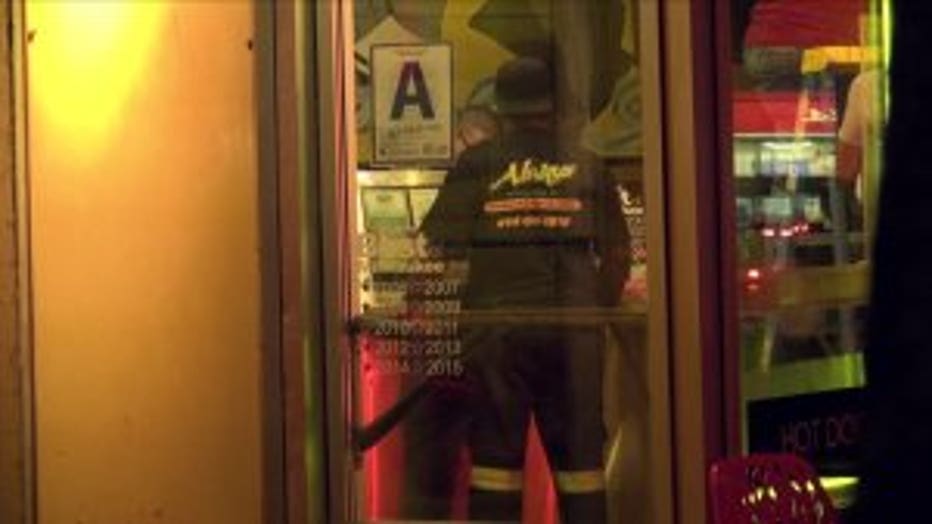 The driver of the Always Towing truck left it parked illegally while he ran into the Dogg Haus restaurant.

Kevin Ryan and Alderman Kovac were more concerned about the company charging for special equipment that was never used.

"Maybe there should be some legal action because of their deception," Ryan said.

"If they're trying to double this charge and claim that every tow is special and unusual, that is a clear violation of the intent of this state law, and we will be exploring our options as a city," Kovac said.

In other words, they said Always Towing just might find itself in "The Dogg Haus."

According to data obtained by the FOX 6 Investigators from the City of Milwaukee, Always Towing and its sister company, 24 Hour Towing, conducted 9,356 private property tows in 2018. If they charged $125 for special equipment for each of those tows, that would add up to more than $1.1 million for the use of special equipment alone.

In an emailed statement, Always Towing said "not all vehicles towed require the use of special equipment, and are therefore not charged." However, the company did not respond to specific requests for the number of tows that were charged the special fee. Based on what they told the Licenses Committee in April 2018 -- and what their attorney told FOX6 in July -- they charge the fee any time they don't have keys for a vehicle, which would presumably be almost every non-consensual private property tow. That's because cars that are towed for being parked where they don't belong are usually towed without the vehicle owner present.

A Wisconsin law passed in 2013 gives the Department of Transportation the authority to set maximum fees for private property tows. However, when DOT published its rule on maximum fees, it declined to set up a mechanism for consumers to dispute towing fees.

If you believe you have been charged fees that do not comply with state regulations, you have some options: