Carroll University student Madeline Demoss' classes are canceled Tuesday, but Mother Nature is proving to be tougher than any exam.

"I’ve noticed that the sleet on my car is starting to freeze a lot faster.  Getting kinda nervous. I probably won’t be out for too long if I can help it," said Demoss.

"It was all hands on deck. Basically you throw everything out the window, and you keep at her until she stops," said Hans Guderyon, Waukesha County Highway Patrol superintendent. 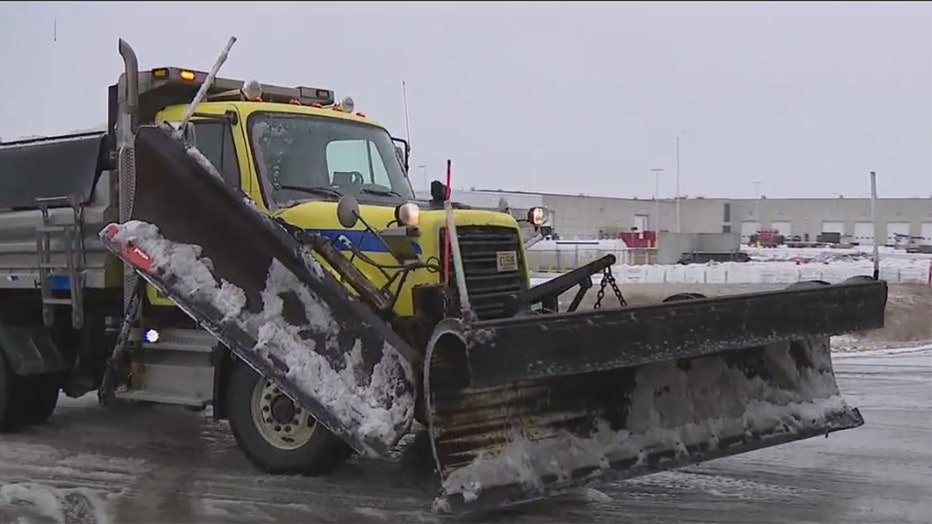 "Now that it’s switched over to a solid form, we can plow it, and the salt will hold a little better. We still have that threat of the re-freeze and ice still forming on the roads," Guderyon said.

There is plenty of salt and brine to keep up with demand.

"We probably have about 14,000 tons at this location – we are good on salt for this storm, and probably the winter going forward," said Guderyon.

It was also a day Devin Johnson won't forget; his mom was getting married Tuesday at 2:22 p.m. in Sheboygan, but he is not traveling any farther than his Waukesha sidewalk.

"It’s not even close to safe out here, to be honest," Johnson said.

Officials with Milwaukee Mitchell International Airport say an airport plow truck was involved in an accident – and came to rest on its side along a taxiway.

Crash in Grafton: Semi, car collide on I-43 off-ramp

One person was transported to the hospital Tuesday morning, Feb. 22 following a crash involving a car and a semi in Grafton. I