WAUKESHA, Wis. - As the deadline approaches for Waukesha Christmas Parade victims to seek money from a central donation fund, a conflict is emerging over where that money will go.

In the days after the Waukesha Christmas parade attack that killed six and injured more than 60, donations came pouring in from around the world. The Waukesha County Community Foundation says more than 15,000 donors from all 50 states and several foreign countries have collectively gifted $5.7 million for the benefit of parade victims and their families. 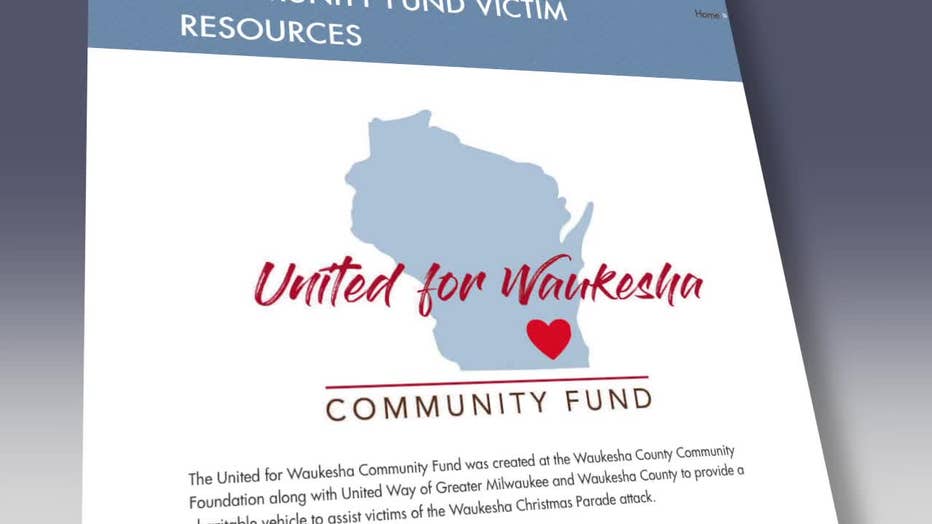 But who were those donations for? That might depend on your definition of support for victims.

"It was terrible, and it’s hard to think about," said Ryan Kohnke, who watched the parade with his young daughters. "I remember it vividly."

Once a member of the U.S. Army's 32nd Military Police Company, Kohnke said psychological trauma of what they witnessed in Waukesha last fall was a lot like the first rocket attack he endured in Baghdad. 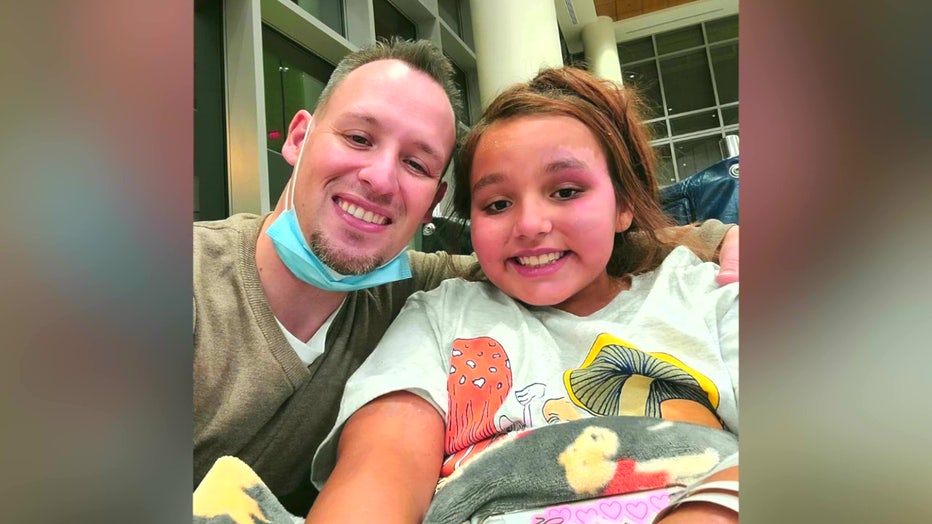 Kohnke's 11-year-old niece, Jessalyn Torres, was one of the Waukesha Xtreme dancers mowed down by an SUV police say was driven by 39-year-old Darrell Brooks.

"She doesn’t really remember much from that time, thank God," Kohnke said. 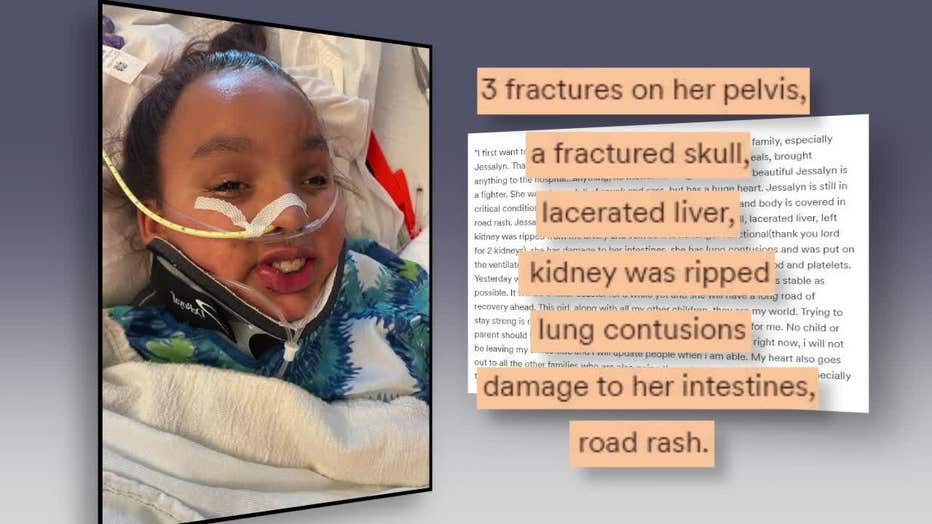 Jessalyn is probably best known as the little girl who woke up in the hospital and managed to say five heartbreaking words -- "Just glue me back together." 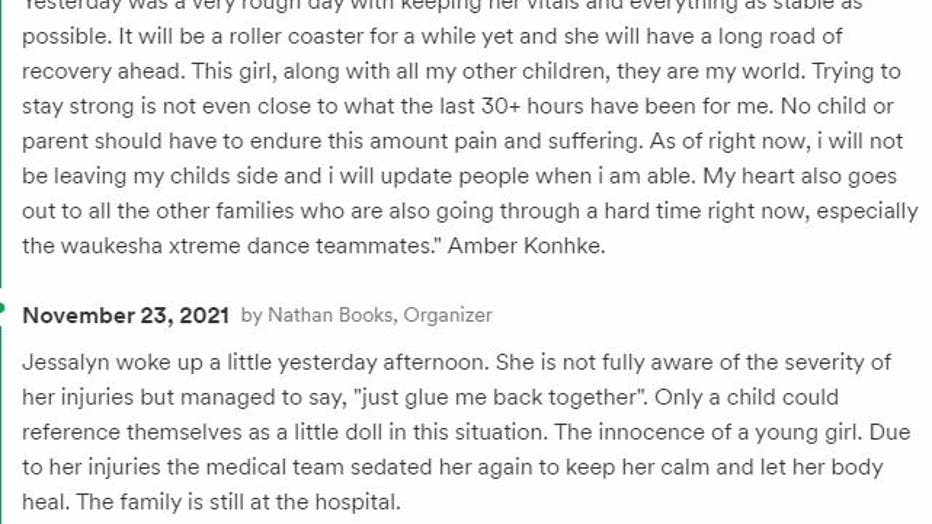 "When something like this happens, people feel helpless," said Melissa Baxter, Executive Director of the Waukesha County Community Foundation. "So you want to help."

Within hours of the attack, the foundation sprang into action, creating the United for Waukesha Community Fund.

"One central place that people could come to that we could share across the world," Baxter said. 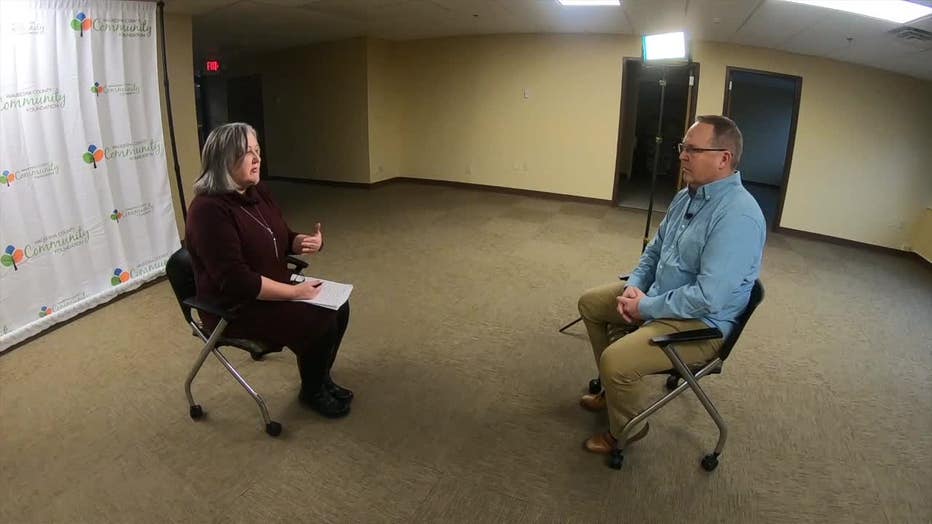 The fund, which will remain open through the end of 2022, has so far collected more than $5.7 million. But it's where some of that money could soon be going that has Anita Busch sounding the alarm.

"After a mass casualty crime, it seems like everybody has their hands out except for the victims of mass casualty," Busch said.

Busch is President of Victims First, a non-profit formed after an Aurora, Colorado, movie theater shooting that killed twelve people, including Macayla Medek, whose father grew up in South Milwaukee. 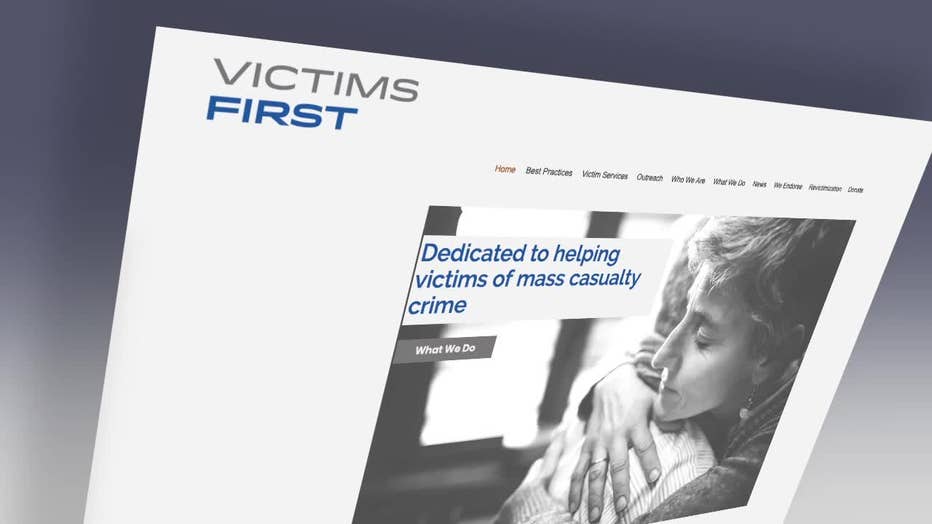 "Donations were pouring in from all over the world," Busch recalled.

Busch and others fought to ensure victims got that money. Soon after, she co-founded the National Compassion Fund, which has now distributed more than $95 milllion to mass casualty victims from Las Vegas to Parkland, Florida, El Paso to Charlottesville, and Milwaukee's Miller Valley to the Roundy's Distribution Center in Oconomowoc.

In every one of those communities, Busch said they made sure 100% of funds donated made it directly to victims and their families.

"That’s not what traditionally happened before the National Compassion Fund was established," Busch said. 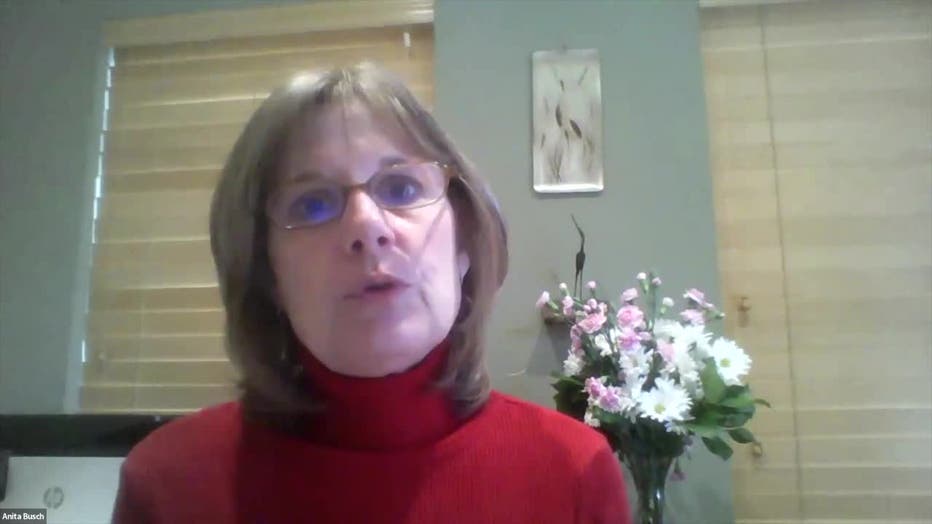 After the parade attack, Busch said the Waukesha County Community Foundation assured her they would do the same, following a model established after the Boston Marathon bombings and the mass shooting at Pulse nightclub in Orlando.

But when a committee was set up in Waukesha to manage fund distribution, Busch said something changed. 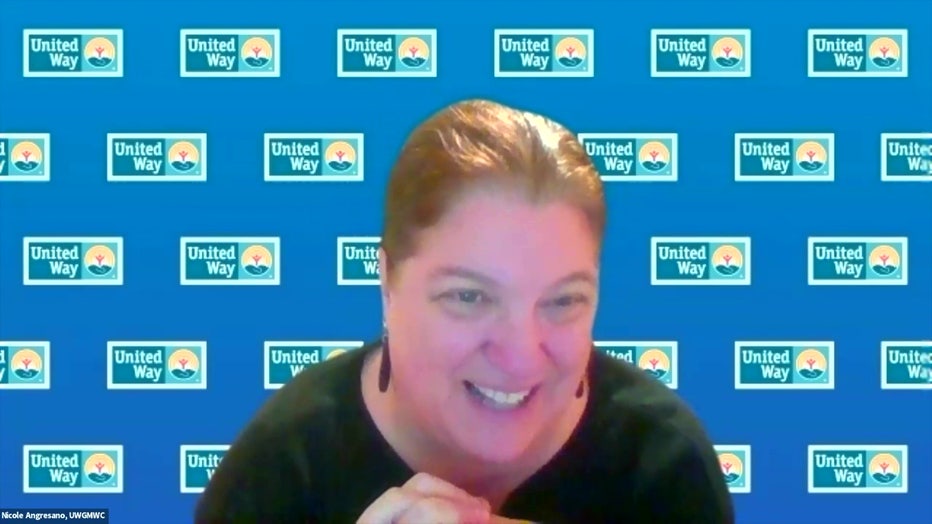 "Some of this feels like semantics," said Nicole Angresano, Vice President of Community Impact for United Way of Greater Milwaukee and Waukesha County. "Some of it feels like an attack on United Way."

Since the parade attack, United Way has solicited donations "to support the impacted families."

"Nowhere on our website does it say direct payments to families. It says ‘support’ for families. We consider the non-profit sector to be part of that support," Angresano said.

Angresano is one of nine committee members who will decide where the money goes. She said those who lost loved ones, who were hospitalized or injured themselves, or even those who merely attended the parade will get most of the money – but not all of it.

"We think there’s going to be an increased demand on mental health services," Angresano said. 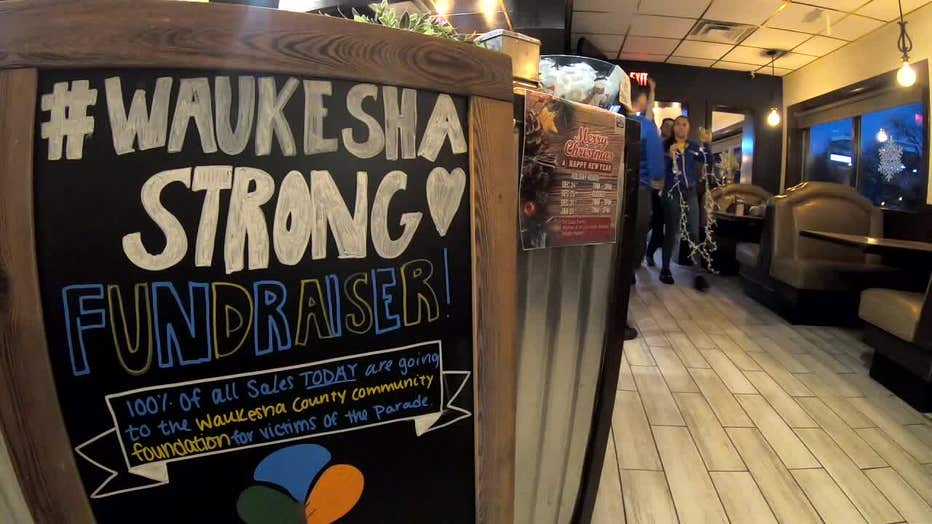 The fund's formal plan for giving out the funds lists eight social service agencies that are designated to receive "priority grant funding." Federal tax records show those same eight charities already get more than $36 million per year in contributions and grants.

That includes Impact 2-1-1, a United Way partner since 1965, and one of the agency's featured programs.

Busch calls that an apparent "conflict of interest."

"I don’t understand the term conflict of interest," Angresano said. "Impact 2-1-1 getting money to support this work has nothing to do with United way. We don’t benefit from that financially."

Angresano says United Way won't make a penny from the Waukesha fund. It is foregoing its usual administrative fees. Still, she believes non-profits deserve a piece of the pie. She just won't say how much.

"I’m reticent to comment on this because the community fund is operating things," Angresano said.

The foundation didn't want to say, either.

"Again, that will be a very small percentage," Baxter said.

"You know, that will be a decision for the committee," Baxter replied.

"It’ll be a much smaller amount than the direct payments will be," said Angresano.

"When I say small, I mean small," Baxter continued. 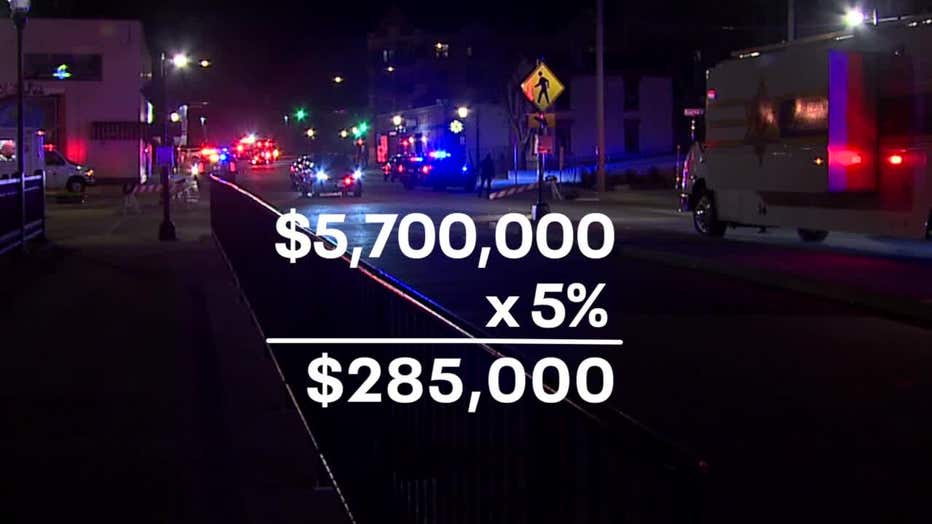 Whether that's a little or a lot may be a matter of perspective. But to Ryan Kohnke, that not really the point.

"When these people opened their wallets and donated to the funds, it was for the victims," Kohnke said.

If you lost a loved one or if you were injured or even simply attended the Waukesha Christmas Parade, you may be eligible to make a claim for some of these funds. But you have to act fast! The deadline for claims is Monday, Feb. 28.

Follow this link to find out more: United for Waukesha Community Fund Claims

The Waukesha County Community Foundation says just because a charity is listed as eligible for priority grant funding does not mean they will apply. Impact 2-1-1 tells FOX6 News it has no plans to apply for donated parade funds.

So far, only one non-profit has applied. But the foundation won't say who it is until distributions become public at a later time.

A mother wants answers after her 20-year-old son died in a Milwaukee jail cell Wednesday, leaving behind two infant children.