MERCEDES, Texas (Border Report) — A member of the U.S. Section of the International Boundary and Water Commission’s Lower Rio Grande Citizens Forum raised concerns on Wednesday during their meeting that the border wall being built in Starr County could cause flooding that could affect wildlife and U.S. and Mexican border towns. 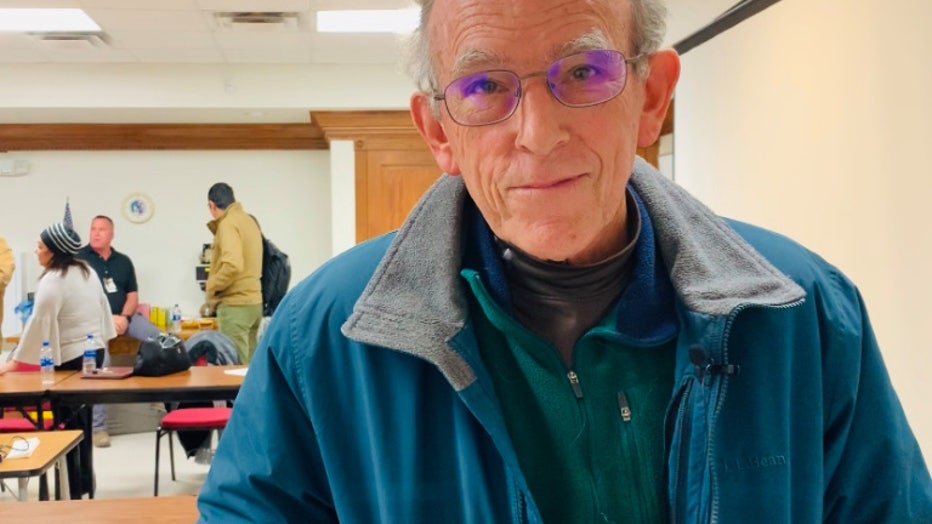 Jim Chapman, vice president of the Friends of the Wildlife Corridor, sits on the U.S. Section of the International Boundary and Water Commission’s Lower Rio Grande citizens Forum. at a Nov. 13, 2019, meeting he raised concerns about flooding in Starr

Jim Chapman, vice president of the Friends of the Wildlife Corridor, a nonprofit support group for Santa Ana National Wildlife Refuge and Lower Rio Grande Valley National Wildlife Refuge, even suggested to his fellow citizens forum group that they bring in a Mexican official to brief them on this issue during their next meeting in February.

“Basically, the idea of building a solid structure that will, in the case of a flood very quickly clog up with debris and essentially act as a levee or a wall, it’s a questionable idea,” Chapman told Border Report after the two-hour meeting held at IBWC offices in Mercedes, Texas. “I think the public needs to know what price may be paid for building in a flood plain.”

But by the time that meeting is held in February, several sections of the new border wall are expected to already be up in Starr County, in South Texas. This is a flat rural county whose wildlife and towns will be threatened if it rains and a 30-foot-tall border wall obstructs the water’s flow, environmentalists say.

And it’s a refrain that has been heard in Starr County many times before. Plans to build a border fence back in 2009 — as part of the 2006 Secure Fence Act — were scrapped after then-U.S. IBWC Commissioner C.W. Ruth objected it because of possible violations to the U.S.-Mexico Water Treaty, according to an IBWC letter obtained by Border Report.

“Because of the potential for negative impacts on our relationship with Mexico, advise CBP/SBI to look at other options,” Ruth wrote in a Jan. 8, 2009, letter to Mark Borkowski, then executive director of the CBP’s Secure Border Initiative.
Read a January 2009 letter from IBWC U.S. commissioner to CBP saying building a border wall in Starr County is unsafe
President Trump has declared illegal immigration a national security threat and he has promised to build hundreds of miles of wall along the Southwest border with Mexico. His plans include putting up 52 miles of wall along Starr County’s entire border with Mexico.

In September, U.S. Customs and Border Protection announced construction contracts were awarded to start building in Starr County, and CBP has told Border Report that panels are going up on federal lands a couple of miles east of the town of Fronton in the Arroyo Ramirez Wildlife Refuge Tract. The 668-acre refuge is where ancient oyster beds are located. The section being cleared is about 3 miles long.

“When the border wall was first proposed for Starr county, the Mexican section of the IBWC was opposed and they were really opposed to the construction from the beginning,” Chapman said. “There’s no levy system in Starr County so if you build a structure like a border wall in the flood plain you’re going to be pushing water to the other side.”

Mexican towns like Miguel Aleman, which is across from Roma, Starr County, could be seriously affected, and Chapman isn’t the only one who feels this way.

Building in a floodplain

Several documents obtained by Border Report from engineers contracted by IBWC to study the area dating back to 2009 indicate the area also is in a dangerous floodplain. And a letter from the Mexican IBWC principal engineer dated Dec. 13, 2011, refutes the idea of putting a border fence up near the Starr County towns of Roma, Rio Grande City and Los Ebanos, citing serious flood concerns.

“If you consider that, given the design characteristics, the fence obstructs 60-70 percent of the hydraulic area in a direction perpendicular to the flow, and if you add to that the effect of the current retaining trash and debris, the significant length that is located in the floodplain, and the position of the fence relative to the direction of flow, the fence constitutes a serious obstruction and deflection of the Rio Grande flows towards Mexico,” Mexican IBWC Principal Engineer Luis Antonio Rascon Mendoza wrote to his U.S. counterpart, John Merino, who was then principal engineer for the U.S. Section of the IBWC.
Read the December 2011 letter from Mexican IBWC officials rejecting border wall in Starr County

A conflict of interest?

Environmentalists like Scott Nicol, co-chairman of the Sierra Club’s Borderlands Campaign, say they can’t stomach the idea that just a few years ago the county’s topography clearly was deemed unsuitable for building a border fence. But now it seems that IBWC has no objection to a wall in Starr County because its leaders have not spoken out against it as they did before.

Nicol also pointed out that a key employee for Baker Engineering, Dr. Padinare Unnikriskna, who was involved with many of the previous environmental flood models and studies of Starr County, now works for IBWC and has been instrumental in working with CBP and U.S. Army Corps of Engineers in solidifying border wall plans there.

When asked if that is a conflict of interest, Kuczmanski said it is not.

“Dr. Padinare Unnikrishna severed all ties with his previous employer on Sept. 30, 2011. The U.S. Section’s Legal and Ethics Office has determined there is no conflict of interest,” Kuczmanski wrote in an email.

“As far as Dr. Unnikrishna is concerned, he should have recused himself with anything to do with those flood models that he was paid by Baker to produce,” Nicol said on Monday. “He should not be weighing in on the validity of models he helped create.”

Nicol supplied the letters and documents to Border Report, which took him years to obtain via Freedom of Information Act requests.

Many of the documents are significantly redacted, which Nicol said is not right.

“Whether or not a border wall worsens flooding should not be redacted. That should be released to all concerned residents,” Nicol said. “People who live in Starr County should not get little bits and pieces of information that involves their livelihood.”