SAN DIEGO — One of the U.S. military's most significant war crimes cases ended with a decorated Navy SEAL walking out of court a free man after acknowledging moral and ethical mistakes, including posing in photographs with the body of an Islamic State captive he was cleared of killing.

Special Operations Chief Edward Gallagher will spend no time in jail for the only charge he was convicted of — posing with a human casualty — despite being given the maximum sentence of four months' confinement for the offense Wednesday by a military jury. That's because it is less than the time he was held in custody before the trial.

The jury also called for his rank to be reduced, hurting his pension and benefits just as the 19-year-veteran prepares to retire. Gallagher turned to his wife, shook his head and pretended to unpin his "anchors" — the insignia of a chief — and fling them across the courtroom. He then smiled and hugged her. 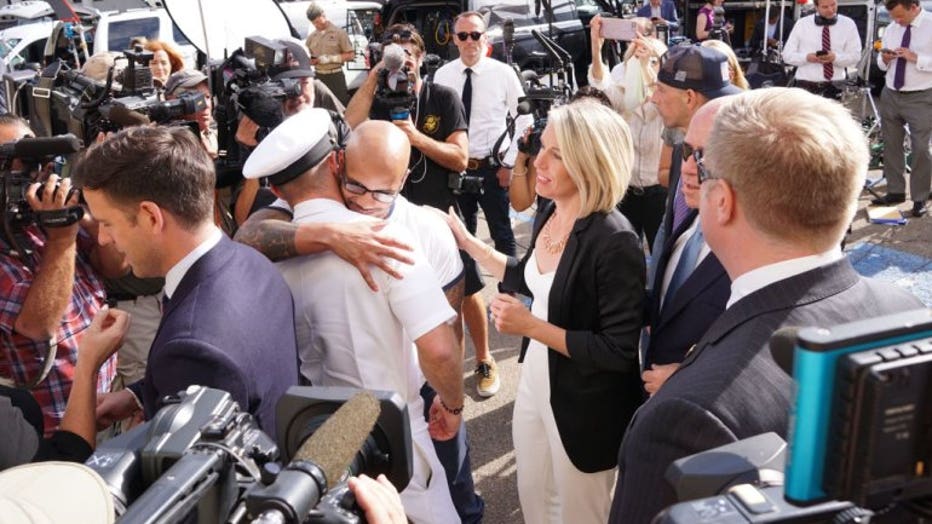 While the outcome was a major blow to the Navy's prosecution, it is expected to have lasting effects on the culture of special operations forces.

The fact that Gallagher escaped prison may discourage future reporting, while others see the case sending a different message.

"It will be a cautionary lesson for all special operations that they're not beyond the law and that's a lesson that's valuable in and of itself," said former Marine Corps prosecutor Gary Solis, who teaches military law at Georgetown.

Naval Special Warfare Commander Rear Adm. Collin Green said the SEAL community "will learn from this experience through critical self-examination and be better for it."

The case exposed a deep rift in the celebrated elite SEAL warriors. It also brought into question whether a long-honored code of silence meant to protect covert missions had become a shield for those who stray from U.S. military values and commit war crimes.

A jury cleared Gallagher on Tuesday of all other charges, including premeditated murder in the death of the captive and attempted murder in the shootings of civilians during the 2017 deployment to Iraq. He also was charged with impeding the investigation and retaliating against the SEALs who reported him, among other things.

Before his sentencing Wednesday, the Bronze Star recipient addressed the jury, saying he was fully responsible for his actions on the day he took photos with the body of the 17-year-old militant who died in his care.

"I put a black eye on the two communities that I love — the U.S. Marine Corps and the U.S. Navy — specifically the SEAL community," a soft-spoken Gallagher said.

He said he tried to lead by example but didn't always succeed.

"I've made mistakes throughout my 20-year career — tactical, ethical, moral — I'm not perfect but I've always bounced back from my mistakes. I'm ready to bounce back from this," he said.

The jury called for reducing Gallagher's rank by one grade to petty officer 1st class and ordered his monthly pay cut by $2,697 for four months, though the judge capped that to two months because he said Gallagher was held in overly harsh conditions before being tried and deprived of treatment for a traumatic brain injury.

Navy prosecutor, Lt. Brian John, in asking for a reduction in rank told the jury that that the platoon chief should not have been the centerpiece of the photos in which nearly all the platoon members posed with the body. Instead, he said, Gallagher should have put a stop to it since the images could be used as propaganda by the Islamic State to harm U.S. forces.

"For that reason, he no longer deserves to wear anchors," John said.

The sentence will not go into effect until it is approved by the commanding officer overseeing the court-martial. Gallagher's lawyers said they plan to appeal the punishment.

The photos were taken after Gallagher and other SEAL medics provided treatment for the captive who was wounded in an airstrike on May 3, 2017, and handed over by Iraqi forces.

One image shows Gallagher clutching the hair of the corpse with one hand and holding a knife in another. Prosecutors used the images and text messages that included "got him with my hunting knife" to build a murder case against Gallagher.

Gallagher could have faced life in prison if convicted of murder. The verdict was met with tears and hugs.

President Donald Trump, who intervened earlier this year to have Gallagher moved from the brig to less restrictive confinement, tweeted congratulations to the SEAL and his family.

"You have been through much together. Glad I could help!" the president wrote.

Seven SEALs from his platoon testified that Gallagher unexpectedly stabbed the war prisoner, including two SEALs who told the jury they witnessed him plunge the knife into his neck. The defense said Gallagher was framed by junior SEALs who fabricated the allegations to oust a rigorous chief.

In an interview Wednesday on Fox & Friends, Gallagher said he would tell future SEALs that "loyalty is a trait that seems to be lost, and I would say bring that back. You're part of a brotherhood. Remember, you're there to watch your brother's back."