(CNN) -- Virgin Galactic is one flight closer to becoming a commercial "spaceline." The company's passenger spacecraft, SpaceShipTwo, completed its first rocket-powered flight Monday morning above the Mojave Desert in California.

About 45 minutes into the flight, SpaceShipTwo was released from its carrier craft, WhiteKnightTwo. Ignition of the rocket motor was triggered, carrying SpaceShipTwo to a maximum altitude of 56,000 feet. During the 16-second engine burn, the spaceship broke the sound barrier, according to a statement from Virgin Galactic.

The rocket-powered portion of the flight lasted a little more than 10 minutes, and the entire flight took about an hour. The flight was not a space flight. Virgin Galactic said it will continue testing this year and plans to reach full space flight by the end of 2013. 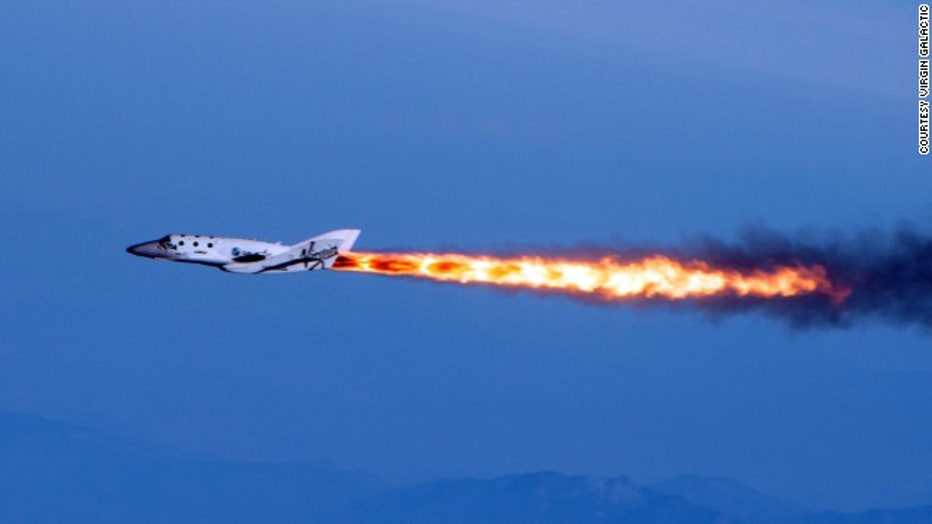 Virgin Galactic's SpaceShipTwo made its first rocket-powered flight Monday over the Mojave Desert in California.

"For the first time, we were able to prove the key components of the system," said Virgin Galactic founder Sir Richard Branson in a statement. Branson was in the Mojave Desert for the flight.

"Today's supersonic success opens the way for rapid expansion of the spaceship's powered flight envelope, with a very realistic goal of full space flight by the year's end."

More than 500 would-be space tourists have signed up to take short $200,000 flights that would involve several minutes of weightlessness.