The USS Dwight D. Eisenhower passed through the canal on Friday on its way to the Red Sea, which wouldn’t have been possible a week ago. (Source: U.S. Navy via Storyful)

SUEZ, Egypt - Count the U.S. Navy among those thrilled the Suez Canal is once again open for business.

The USS Dwight D. Eisenhower passed through the canal on Friday on its way to the Red Sea, which wouldn’t have been possible a week ago.

"Our strike group is excited to sail and fly in the conduct of our operations in the Red Sea," Rear Adm. Scott F. Robertson said in a statement.

A massive cargo ship named the Ever Given became wedged in the canal on March 23, disrupting global trade for days.

It took six days, but crews finally dislodged the Ever Given on March 29, clearing a shipping route that connects Europe to Asia.

Without it, ships would have to make the costly and lengthy journey around South Africa or the Panama Canal in order to complete their voyage. 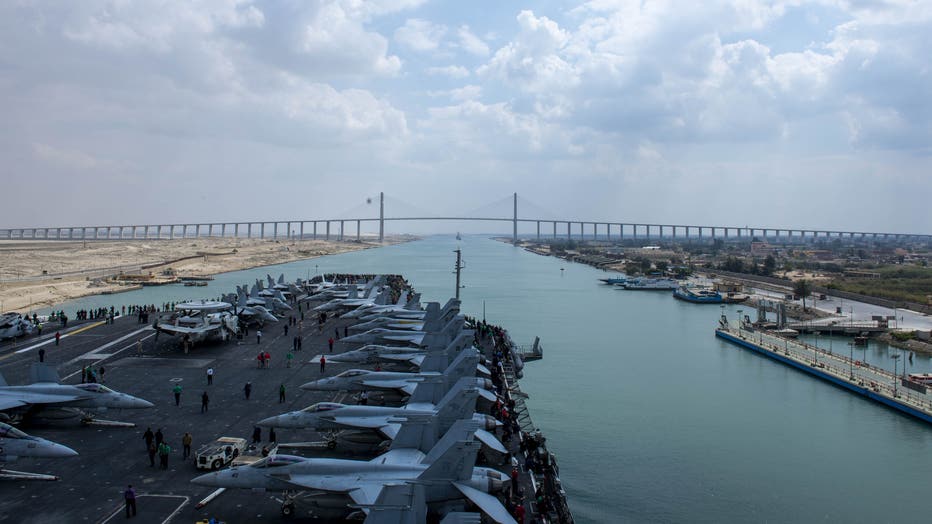 The Navy, however, wasn’t too burdened by the blockage. While in the Eastern Mediterranean Sea, the USS Dwight D. Eisenhower was able to support Operation Inherent Resolve — which is an international military intervention against ISIS.

Even so, they’re grateful for how diligently Egyptians worked to clear the waterway.

"We appreciate the Government of Egypt and Suez Canal Authority’s efforts to ensure the safety of navigation in this critical waterway for all ships, and in allowing the IKE CSG to transit so quickly," Vice Adm. Samuel Paparo said.