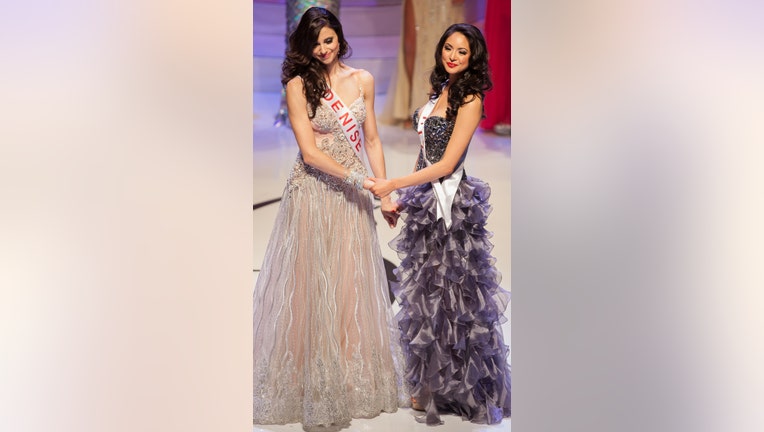 (CNN) -- Denise Garrido seemed stunned when she was announced the winner of Miss Universe Canada on Saturday. The 26-year-old, who has a black belt in taekwondo and a degree in biomedical sciences, waved to the crowd in Toronto before being surrounded by the 56 other contestants.

At one point she had trouble keeping her crown on; she got some help to keep it stabilized.

It wouldn't stay on for long. The next day, the organization that operates the pageant -- which chooses the country's contestant for the Miss Universe competition -- announced it had made a mistake. Garrido was third runner up.

The winner was actually Riza Santos, 26, who has served in the Canadian military and studied engineering.

"It was definitely shocking," Garrido said on CNN's "Starting Point" Wednesday. "You go through this complete high and your entire family, your town is all celebrating, wishing you congratulations. And then 24 hours later, you're told, 'Oh, by the way.'"

The two women appeared live on CNN from different locations in what they said was their first conversation since the mix-up was announced.

"I don't feel like I missed out," Santos said of the experience she didn't get to have: the televised moment of victory. "After Denise was crowned I was disappointed, because I felt like I did well in the competition, but I know Denise as a person and I was happy for her genuinely."

"I feel bad that I took away that moment from her," Garrido said. "But at the same time, Riza, I am glad that we kind of share this bonding experience."

The two said they've known each other for a couple of years.

"I've always known you to be a person of integrity and just a respectful, positive person," Santos responded. "I thank you so much for your graciousness during this time."

The day after the competition, when officials were validating the scoring results, "a typo was discovered in the top 5 entries, which significantly impacted the final results of the competition," Beauties of Canada said on its website.

"This is an unfortunate circumstance where a human error was made, and in such a situation, as difficult as it is, it is only right to correct the error."

In a separate statement, the organization offered Garrido a "sincere apology," adding, "We have no doubt she will continue to succeed in her endeavors and we wish her well."

Garrido hasn't yet decided on her next step. "Probably education, masters, med school," she told CNN. "Who knows what the future holds for me right now."

Santos said discovering that she had won "and I had this opportunity to represent Canada on the world stage was a huge honor for me and very humbling at the same time."

Last year, the same competition made international headlines over a transgender contestant who was ultimately allowed to take part.