MILWAUKEE -- Two Milwaukee men have been charged for their alleged roles in the death of Frederick Martin near 9th and Center in July 2015. The accused are 32-year-old Michael Williams and 32-year-old Tony Madison.

Williams is charged with first-degree reckless homicide - party to a crime and possession of a firearm by a felon. Madison faces a felony charge of harboring or aiding a felon.

According to the criminal complaint, Frederick Martin was shot and killed at a convenience store near 9th and Center on July 24th. Officers were called to the scene around 6:30 p.m. on that date to check out a shooting complaint. They found Martin a short time later, inside the convenience store -- and he was pronounced dead around 7:00 p.m.

The victim's vehicle was found abandoned near 39th and Brown.

A medical examiner determined Martin died as a result of a single gunshot wound. His death was ruled a homicide. 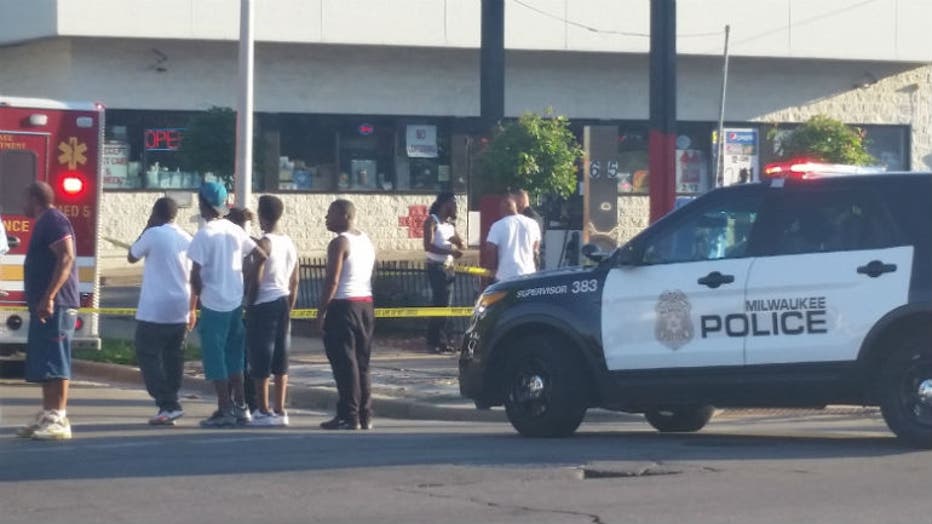 A short time after the initial shooting complaint, officers responded to a second shooting scene near 54th and Hampton Avenue. Officers found numerous spent gun casings and bullet fragments "as well as numerous bullet strikes on the neighboring houses and parked cars." One of the victims from that shooting ended up at St. Joseph's Hospital a short time later -- that person was identified as Michael Williams. A second victim, identified as Tony Madison, was treated at Froedtert Hospital.

Later in July, investigators reviewed surveillance video from the initial shooting scene where Martin was killed.

The video showed a man arriving in a black vehicle at the gas station/convenience store.

Then, a red Ford Expedition was seen driving past the gas station slowly.

Then, Frederick Martin arrived at the gas station, parking his vehicle at a pump.

Seconds later, the red Ford Expedition returned to the gas station, and parked next to Martin's vehicle.

The video showed the man who arrived in the black vehicle then got into the victim's vehicle, and a man exited the red Ford Expedition. This man passed the victim as the victim entered the convenience store.

When the victim exited the convenience store, he greeted an individual in a silver vehicle parked near the front of the store.

The victim was then seen getting into his vehicle, and the man who initially arrived in the black vehicle was standing outside the victim's vehicle.

At this point, the man who exited the red Ford Expedition and passed the victim as the victim had entered the convenience store approached the victim's vehicle. This man opened the rear passenger side door and leaned in.

The video then showed the victim running from his vehicle into the convenience store, before collapsing onto the floor.

The man who initially showed up at the convenience store in the black vehicle was seen fleeing the scene on foot.

The man who had exited the red Ford Expedition eventually got back into that vehicle and took off.

The individual who was in the silver vehicle also took off.

Minutes later, the video showed the man who initially showed up at the convenience store in the black vehicle returned to the convenience store and got into Martin's vehicle -- fleeing the scene. This individual told police he witnessed the shooting, and that after the shooting, "he could not find the victim, so he drove the victim's vehicle until it stalled near 39th and Brown."

On August 12th, police located Madison in a home on N. 19th St. and arrested him on an outstanding warrant. It was at that time that he stated he was shot and wounded in July -- and he identified Williams as the person he was with when he was shot.

It wasn't until March 3, 2016 that police had their next contact with Williams. He was in a car that was pulled over by police. Officers arrested Williams -- and a search of the car "resulted in the recovery of two semi-automatic pistols." Two days later, the complaint indicates Williams was identified in a lineup "as the person who shot Frederick Martin at the gas station."

The criminal complaint indicates that Williams was convicted of robbery with threat of force in 2002.

Williams and Madison are due in court for their preliminary hearings in this fatal shooting case on March 16th.