The Transportation Security Administration has extended its mask mandate for travelers through Jan. 18, 2022, a TSA spokesperson told FOX TV Stations on Tuesday.

"TSA will extend the directives through January 18, 2022. The purpose of TSA’s mask directive is to minimize the spread of COVID-19 on public transportation," according to the spokesperson.

The Biden administration announced the extension on a phone call with the TSA and U.S. Centers for Disease Control and Prevention (CDC) on Tuesday, according to Reuters.

In April, the TSA extended its original mask mandate "for individuals across all transportation networks throughout the United States, including at airports, onboard commercial aircraft, on over-the road buses, and on commuter bus and rail systems through September 13," according to a news release. 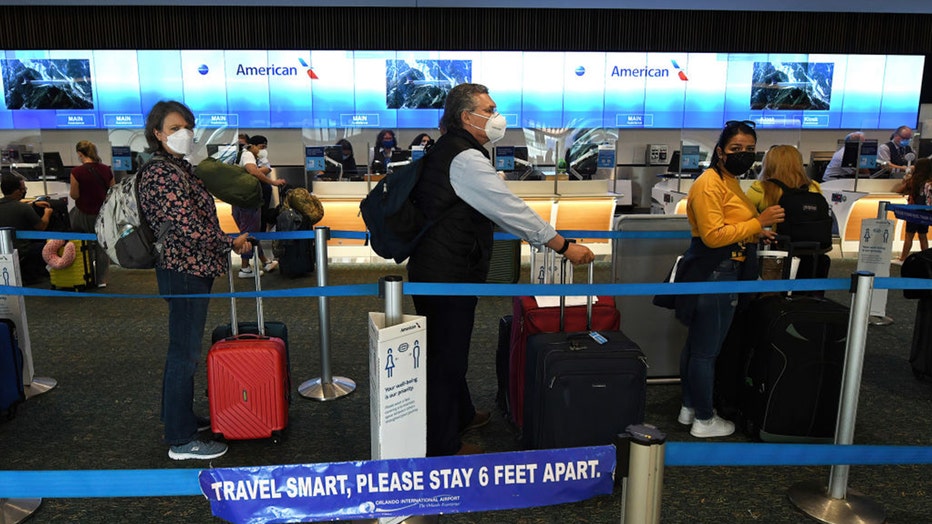 FILE - Travelers wearing face masks as a preventive measure against the spread of COVID-19 wait in line at the American Airlines ticket counter at Orlando International Airport.

The move to extend mask-wearing for all travelers into 2022 comes amid a surge in new COVID-19 cases largely driven by the highly transmissible delta variant.

The mask mandate has been a point of contention and has led to many hostile encounters between passengers who don’t want to wear a mask and flight attendants tasked with enforcing the rule.

The U.S. Federal Aviation Administration has received more than 3,715 reports of unruly passengers this past year between Jan. 1 and Aug. 1. Of those, 2,729 were mask-related incidents. Overall, the FAA reported opening 628 investigations — the highest number on record.

"I think every airline is dealing with this. Flight attendants across the industry are sometimes fearful to come to work, it's something we need to get a handle on," said Paul Hartshorn, a spokesman with the Association of Professional Flight Attendants that represents American Airlines crews.

The FAA increased the maximum penalty from $25,000 to $37,000 per violation for unruly passenger cases.

Several major cities have reinstated indoor — and some outdoor — mask mandates, including Los Angeles, California and Baltimore, in an attempt to slow a surge in new cases.

"This pandemic is not over and we must all do our due diligence to protect ourselves and our neighbors," Baltimore Mayor Brandon Scott said last week.

Meanwhile, U.S. health authorities are expected to recommend an extra dose of the vaccine for all Americans eight months after they get their second shot on Wednesday, according to two people who spoke to The Associated Press on condition of anonymity to discuss internal deliberations.

Last week, health officials recommended boosters for some people with weakened immune systems, such as cancer patients and organ transplant recipients. If the shots are expanded as expected to other Americans, among the first to receive them could be health care workers, nursing home residents and other older people.

More than 198 million Americans had received at least one dose of a COVID-19 vaccine, or 70% of those who are eligible, according to the CDC. Just under 60% of Americans 12 and older are fully vaccinated.

Studies show the vaccine remains highly protective against severe COVID-19, but results from Israel released last month suggest its effect wanes. Its effectiveness against symptomatic infection peaked at 96% two months after study participants got their second dose. By six months, it was down to about 84%.

The Associated Press, FOX News and KTVU FOX contributed to this report.