ROME — Too much Dolce Vita can get you banned from Rome, where the mayor on Friday ushered in a permanent get-tough approach on boorish behavior by tourists and those Romans who exploit them.

Exasperated by tourists who frolic in Rome's public fountains, vandalize its monuments and treat its landmarks as their own personal living rooms, the city famous for its artistic heritage and easy-going lifestyle has had enough.

While many of the measures already existed in temporary form or were rarely enforced, a unanimous city council vote on Thursday night made them permanent. And there's a new twist: disobeying these rules means local authorities can exile the badly behaved from the city's historic center for 48 hours.

"The Rome city center is an area protected by UNESCO, so clearly our center is our business ticket," Raggi told The AP in an interview in which she promised "zero tolerance for those marring our city." 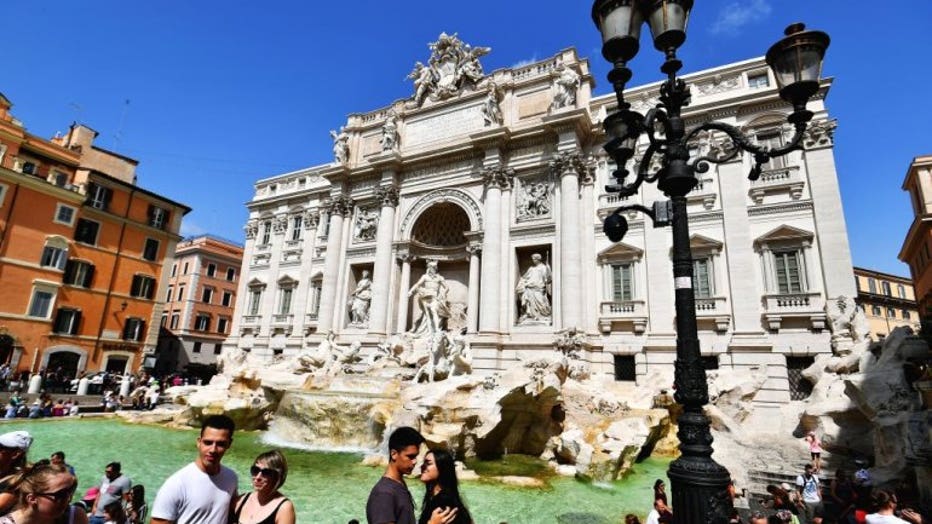 Tourists and visitors gather around the 18th Century Baroque Trevi Fountain and the 16th Century Palazzo Poli in downtown Rome on August 26, 2018. - Faced with the growing number of visitors, one of the most emblematic monuments in Rome, the Trevi fo

Rome's law joins a raft of efforts by tourist-clogged cities around the world to regulate their behavior or limit their numbers.

Florence last year issued an ordinance calling for fines as high as 500 euros ($575) for visitors who eat on sidewalks or in doorways at meal times near its landmark Uffizi Galleries. Venice in the past has banned tourists from eating in St. Mark's Square unless they eating or drinking at the square's pricey cafes.

In France, the Louvre Museum in Paris closed for a day after workers said the crowds were too big to handle. In Amsterdam, the city plans to ban guided tours of the red-light district.

Raggi, the highest profile mayor for the anti-establishment 5-Star Movement, boasted that for the first time since 1946, Rome had an "all-encompassing law," ending decades of "temporary rules."

"We don't want people to take a bath, or ruin or dirty monuments anymore," Raggi said from a terrace above her Capitoline Hill office overlooking the ancient Roman Forum and Colosseum and their steady streams of tourists.

Raggi wouldn't talk politics. But this spring, Matteo Salvini, the fast-rising leader of the rival populist League Party, which is widely expected to go for the Italian capital's City Hall in the next local election, trashed her management, saying Rome had never been dirtier.

Earlier in the day, Raggi told reporters she has started writing foreign ambassadors whose citizens had been caught behaving badly. An aide didn't immediately respond to an AP query asking which countries' ambassadors she had contacted.

On Friday, the local police could be seen telling tourists near the Spanish Steps to put their shoes back on and stop drinking beer.

But the city faces an uphill battle. On the grand staircase that leads to the Michelangelo-designed square outside City Hall, tourists nibbled on snacks, chugged down beer and fed sea gulls chunks of bread as a traffic officer strolled by at the bottom of the stairs.

Enjoying a sandwich with prosciutto and cheese, Irena Stojimanovski, from Serbia, said she hadn't heard about the new law. Watching Rome's chaotic traffic whizz through central Piazza Venezia, the tourist praised the "beautiful monuments, nice and friendly people," and pronounced the food to be fine.

Tourists are not the law's only target. Ever inventive, some locals have taken to dressing up as centurions and aggressively demanding money from tourists who pose for selfies with them. Despite repeated ordinances banning the fake centurions from the Colosseum and other ancient monuments, the wily Romans have taken to whipping off their helmets and changing into street clothes kept handily nearby to avoid trouble with police.