NORTH CAROLINA (WITI) -- Too graphic? That's what Facebook says of a photo posted to a Facebook page intended to raise money for a newborn in need of a heart transplant. This, according to a North Carolina father.

Hudson Bond is in the ICU at Duke Children's Hospital. An artificial heart is keeping him alive -- buying time for the boy to receive a heart transplant.

WTVD says Kevin Bond tried to advertise a Facebook page he created in honor of the boy, called "Hudson's Heart." Facebook said the ad with Hudson's picture was rejected because it was scary, gory or sensational, and it evokes a negative response. 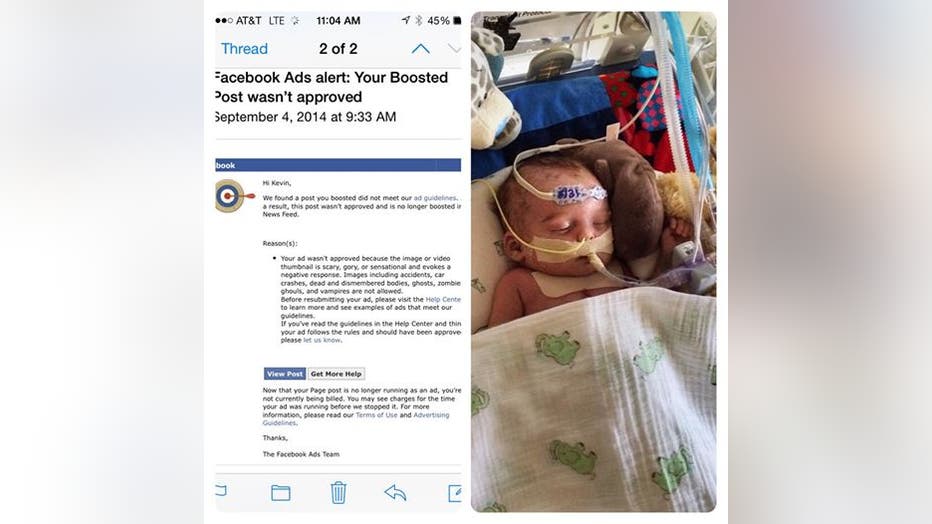 “I was really hurt actually. I mean I kind of cried. He’s my son. I love him. And to have someone reject a picture my beautiful son lying in a hospital bed needing help — that really cut me," Kevin Bond told WTVD.

“We love our son, we just want to share his story and raise awareness for kids like him and to see that request denied is hard considering some of the other garbage you see on that page,” Bond said.

CLICK HERE for more on this story via WTVD.