MILWAUKEE COUNTY -- Five people are charged in connection with the fatal beating of Alfonso Estrada-Cortes following a crash in November of 2014 -- and we're now learning how much time they'll spend behind bars.

Those charged in this case are:

Estrada pleaded guilty to the second degree reckless homicide charge filed against him. On Thursday, July 2nd, Estrada was sentenced to serve 12 years in prison, and 10 years of extended supervision, with credit for 244 days served.

He and the other four people charged in this case have been ordered to pay more than $8,000 in restitution to the victim's family.

Torres pleaded no contest to the second degree reckless homicide charge filed against him. On Monday, July 27th, Torres was sentenced to serve eight years in prison, and 10 years extended supervision -- with credit for 213 days served.

Anderson pleaded guilty to the aggravated battery charge filed against him. On July 2nd, Anderson was sentenced to serve four years in prison and five years extended supervision.

Suarez pleaded guilty to harboring/aiding a felon. On June 30th, she was sentenced to serve four years in prison and five years extended supervision.

Williams pleaded guilty to a felony charge of second degree reckless homicide as party to a crime. On June 25th, Williams was sentenced to serve 15 years in prison and 10 years of extended supervision, with credit for 197 days served. 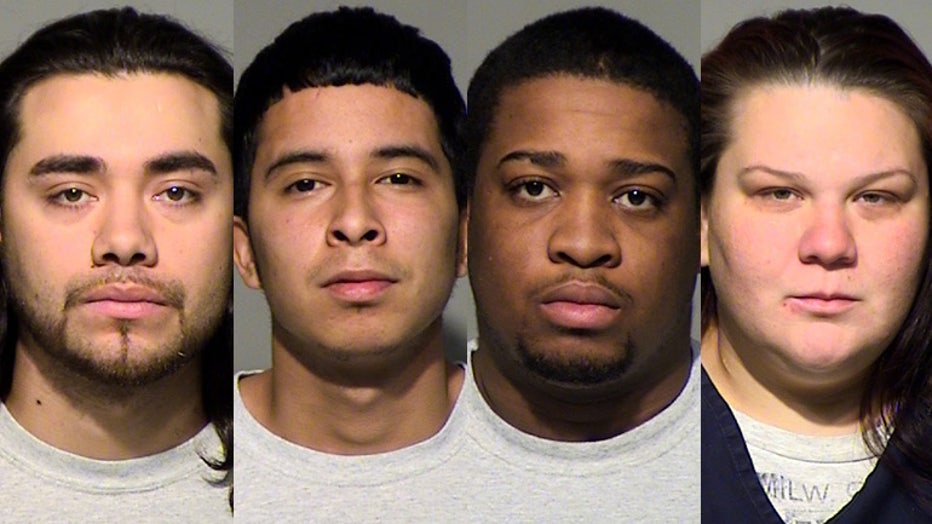 Early on Saturday, November 1st, 2014, police were dispatched to the area of 33rd and Lapham for a fight complaint. There, they discovered Alfonso Estrada-Cortes laying face up with his arms outstretched — unconscious on the sidewalk.

Life-saving measures were unsuccessful, and Estrada-Cortes was pronounced dead at the scene.

An autopsy determined Estrada-Cortes died as a result of blunt force trauma to his head. His death was ruled a homicide.

The criminal complaint filed in this case says a witness told police she saw six to seven individuals kicking someone on the ground.

Minutes later, the witness told police a vehicle pulled up to the scene and a Hispanic man exited the vehicle and began kicking the individual on the ground.

A few minutes later, the witness told police three of the individuals began searching the pockets of the person on the ground.

A second witness corroborated the first witness’ story — saying the individuals seen kicking the person on the ground fled the scene in two separate vehicles — with one of those vehicles striking a parked car, according to the complaint.

One of the vehicles was stopped about 10 minutes after that 911 call was made — and police observed six people inside.

Police searched the vehicle, and recovered a smartphone that had blood covering its screen. Police also observed reddish stains on the inside of the flap that covers the seat mechanisms behind the rear of the second row passenger seat, according to the complaint.

Police spoke with a woman who was inside the vehicle — who told them she got a ride in a white truck from a tavern in the area of S. 58th Street and Mitchell. While in the truck, this woman told police she heard a crash occur.

The woman told police Dionte Williams requested the vehicle turn around and return to the scene of the crash.

Eventually, the woman says the green truck pulled over, and by the time the white truck got to the scene, the occupants of the vehicle that was struck were arguing and fighting with the green truck’s driver.

When they returned to the truck, the complaint says the woman told police one of the individuals said the victim “deserved it for taking off from the accident scene.”

The woman told police she saw Joe Estrada looking through what she believed to be the victim’s wallet.

Police spoke with the driver who says his vehicle was struck by Alfonso Estrada-Cortes, who was driving the green truck. He told police he was at the tavern near 58th and Mitchell — leaving in his own vehicle which was later struck by the green truck — which fled the scene following the crash. The complaint says this man told police the green truck eventually pulled over, and he and the white truck’s occupants approached the green truck’s driver — with Stephano Torres reportedly throwing the first punch.

The complaint indicates at the time of this alleged crime, Stephano Torres was out on bail on misdemeanor charges of OWI and operating while revoked — ordered to commit no further crimes.

Additionally, the complaint says Dionte Williams was out on bail on misdemeanor charges of causing injury by OWI, causing injury by operating a motor vehicle while operating with a prohibited alcohol content, and bail jumping. He was subsequently convicted of OWI. The complaint indicates that at the time of this alleged crime, Williams was also charged with battery and bail jumping, and convicted of bail jumping — ordered to commit no further crimes.