“This needs to be fixed:” FOX6 finds a new “risk on the rails,” could Milwaukee be the next Quebec?

"This needs to be fixed:" FOX6 finds a new "risk on the rails," could Milwaukee be the next Quebec?

MILWAUKEE (WITI) -- Last year, the FOX6 Investigators were the first to expose a new risk on the rails -- a steady stream of long oil trains trekking across the state from North Dakota. The crude oil they carry from what's called "The Bakken" is highly explosive. Since then, there has been growing public concern about these so-called "bomb trains" in Wisconsin. Now, there's a new concern, in a neighborhood in Milwaukee.

When the mile-long oil trains lumber by Milwaukee's Fifth Ward lofts, the cars come roller-coaster close to a renovated building. A sliver of light between brick and steel. 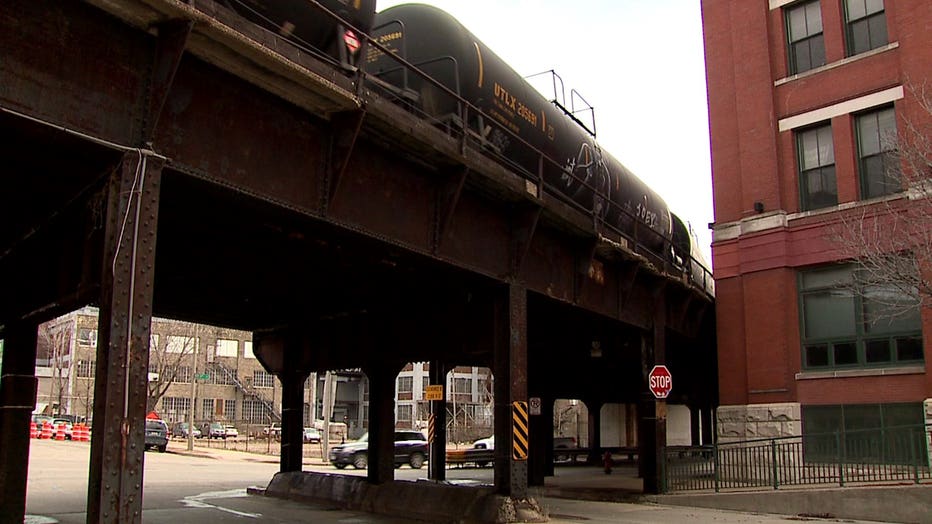 From his fifth floor window, Brian Chiu has a front row seat.

But it's not the noise that concerns him. The fear is five floors down.

Fracking technology has opened an oil spigot in North Dakota.

"It's increased the amount of traffic on the railroads exponentially," Wisconsin Railroad Commissioner Jeff Plale said.

The railroad traffic has increased by several thousand percent.

Bakken crude oil has a very high vapor pressure, meaning it can easily explode. And the tank cars carrying it?

When these trains have derailed, the cracker-thin tank cars have ruptured, with disastrous results. By far the worst incident occurred in Lac Megantic, Quebec. Forty-seven people were killed in the fireball. 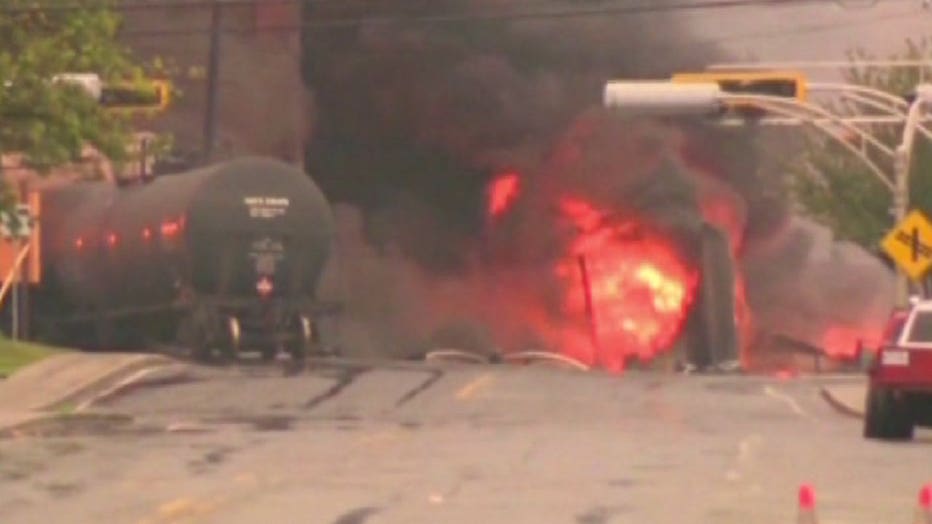 In March, a train derailed across the border in Galena, Illinois. The wreckage burned for four days.

A week before that, a train derailed in West Virginia. Hundreds had to evacuate.

The train that derailed in North Dakota was headed toward Wisconsin. Two trains before that had just been here.

"We're kind of at the epicenter of where this stuff is coming," Plale said.

That brings us back to Brian Chiu and his Fifth Ward home -- and those oil trains just feet from the Fifth Ward lofts, going over the S. 1st Street bridge.

FOX6 first photographed the concern in February -- but it wasn't until the snow and ice melted that we saw the full extent. "I beams" that support the bridge have rusted away at the base to wafer-thin strips of steel. In some spots, entire sections are just gone. 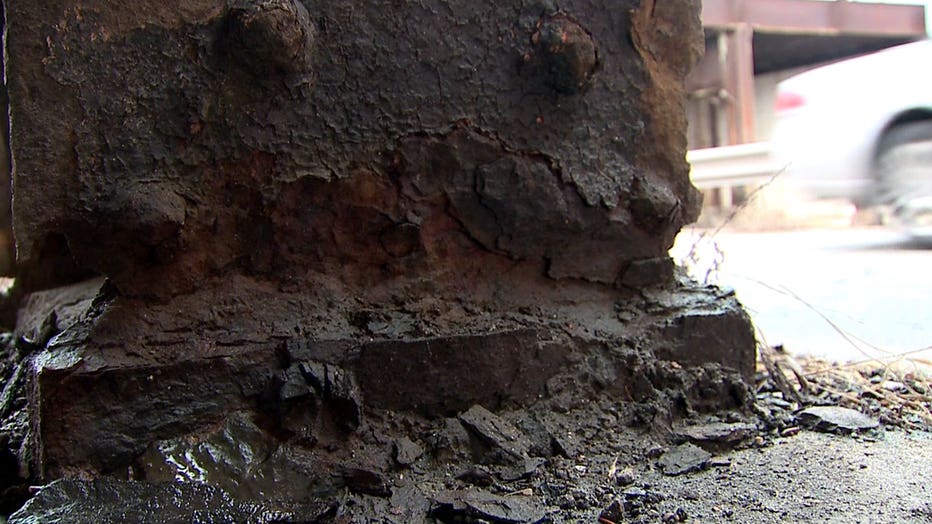 Chris Raebel, an engineer at Milwaukee School of Engineering (MSOE) agreed to take a look at what the FOX6 Investigators found.

"My focus is on steel design -- just like the bridge," Raebel said.

Unlike most railroad bridges, which have elevated foundations, the piers on this century-old span reach right to the road -- where every winter, salt eats away at the steel.

"That's hit the base of the bridge and that`s corroding the metal," Raebel said. 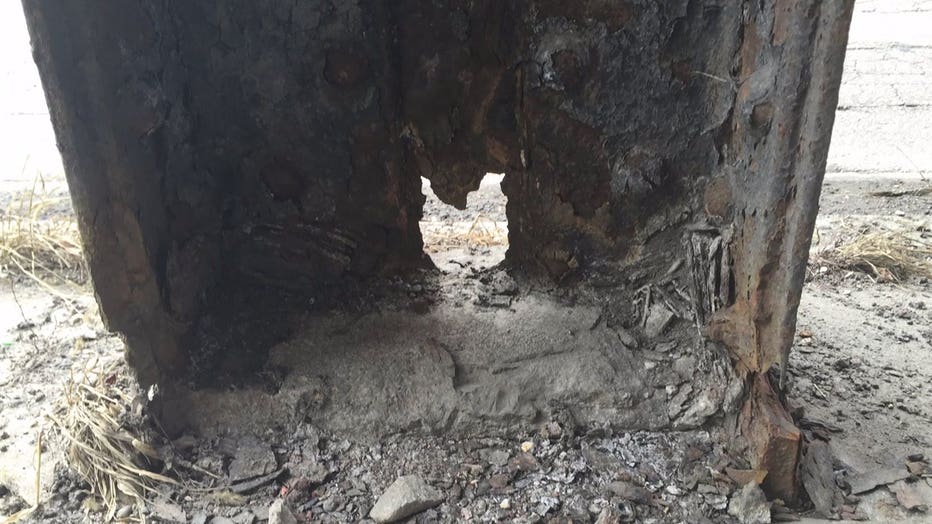 In the past, some of the rusted piers supporting the bridge have been reinforced, but several columns have been corroded right through.

"At some point this needs to be fixed. This is not acceptable," Raebel said.

FOX6 News received similar comments from other structural and civil engineers who saw the photos, but they didn't want to be identified because they may do business with the railroads. They said things like:

"The level of rust and deterioration is a serious structural problem. They should be contacted immediately."

And: "I would definitely report these conditions to the owner of this bridge without further delay."

Canadian Pacific Railroad should already be aware. Canadian Pacific owns the bridge and is required to inspect it each year. In a written reply to a FOX6 request for those records, the company said it "meets or exceeds all federal requirements," and that the bridge was last inspected in the winter. Canadian Pacific wouldn't tell us exactly when that was -- and whether there was snow on the ground. Canadian Pacific refused to show FOX6 News any of the inspection reports.

FOX6 asked them again earlier this months at a Common Council meeting in Milwaukee.

"We`ve given you a statement on that and we won`t have anything to add," a Canadian Pacific representative said.

Canadian Pacific had been invited to Milwaukee to answer questions about the oil trains. Canadian Pacific's brash brush off didn't sit well with some Common Council members.

"You don`t give that image to the community that your facilities are*safe. You don`t give us that confidence," Milwaukee Alderman Terry Witkowski said.

"I'm a structural engineer. My main focus is bridges. I`ve been working with bridges for 20 years -- bridge design, bridge inspection, bridge rehabilitation," Wood said. "You`re going to be looking for fatigue cracks, and the other thing you`d look for is corrosion, certainly, on a bridge -- because corrosion is basically taking away the cross section." 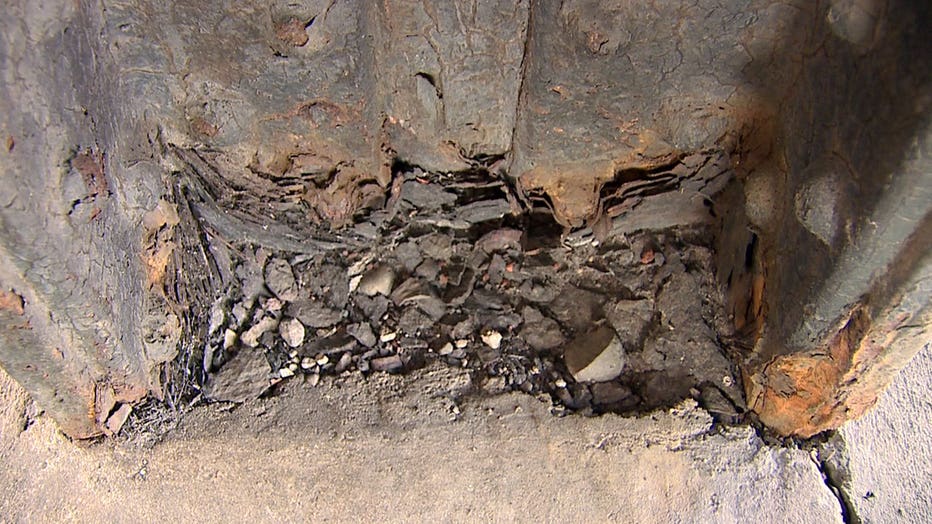 If you look at the base of the "I beams" on the bridge in the Fifth Ward, you'll see layers and layers of flaking -- in some places, more than an inch thick. That doesn't happen quickly.

"It`s been some time, that`s for sure," Wood said. "What happens during corrosion is the steel expands, sometimes seven to eight times what it is, so you can see that actually happening in the base here," Wood said.

FOX6's Brad Hicks: "How do you even inspect this with that much flaking on there without removing the flaking?"

"They would have to remove flaking to see what`s underneath and take some measurements with calipers to find out how much area they perceive is left," Raebel said.

So that's what the FOX6 Investigators did.

FOX6's Brad Hicks: "The kind of thinning we`re seeing here, does that impact the load capacity of a bridge like this?"

"Yes," Raebel said. "They have a certain amount of steel they need to resist the load from above."

And that load is greater than ever.

Engines alone weigh three times what they did when the bridge was built in 1914. And a one-mile train weighs more than 25 million pounds.

And with trains like that moving over the bridge daily -- metal fatigue adds up.

"Is the bridge really built, with all that rust and all that corrosion, to support that kind of weight?" Chiu wonders.

Officials in the state of Wisconsin had the same question. In 2006, a study was commissioned on the impact heavier trains have on state-owned railroad bridges. That study concluded "many within the railroad industry are concerned that the aging bridge infrastructure will no longer be able to withstand the increased loadings."

One bridge engineer who examined FOX6's pictures said the problem may not be that bad, because in theory, you could cut a vertical pier in two horizontally, and it would still hold up the bridge. But that's assuming you still have inch-thick "I beams" -- not corroded columns.

The concern here isn't that the bridge will completely collapse -- but that if a column gives way and the load shifts and the train tips -- with the Fifth Ward lofts just feet away, could Milwaukee become another Quebec?

"I would encourage the owner of the bridge to seriously look at this and consider repairs. And it seems like it should be done soon," Raebel said.

To their credit, the railroads, including Canadian Pacific, have been at the forefront -- pushing the federal government for stricter tank car standards. The railroads don't actually own the tank cars -- the oil companies and third-party leasers do.

Eleven days ago, the federal government announced new cars need to be thicker, and the old ones need to be retrofitted within five years.

The federal government is the only entity that can demand the railroad turn over its inspection reports on the bridge. For two months, FOX6 News repeatedly asked the Federal Railroad Administration if it has any of Canadian Pacific's inspection audits for the S. 1st Street bridge. The agency hasn't responded.

Local municipalities like Milwaukee are pretty powerless when it comes to regulating the railroads.

On Tuesday, May 12th, the Milwaukee Common Council approved a resolution urging federal regulators to immediately inspect all tracks, bridges and crossings on which Bakken crude oil is carried -- but at the end of the day, that's simply a request. 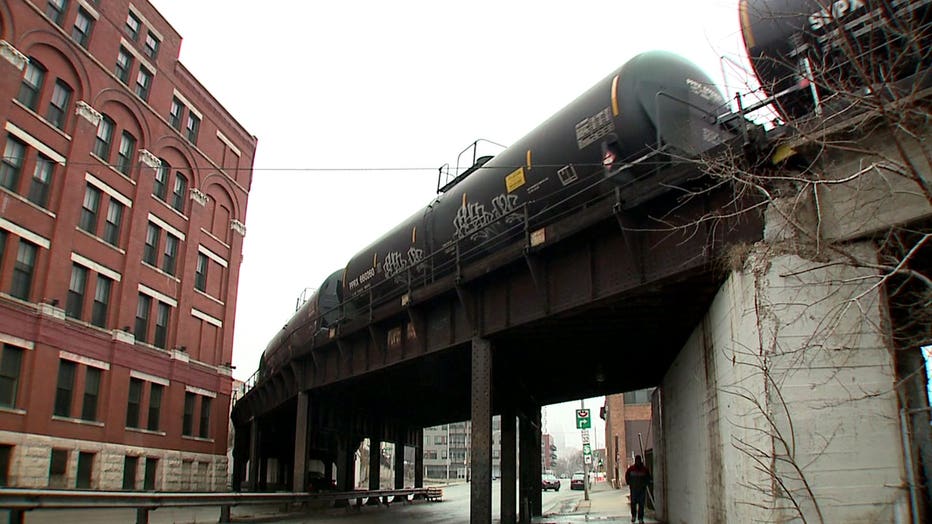