MILWAUKEE -- They are a sad reminder of lives lost: Balloon releases have become a staple of mourning and vigils throughout Wisconsin.  In Milwaukee, balloon releases can occur on a near-weekly basis, with dozens of balloons sent up into the sky to honor a lost loved one.

On Saturday, April 6, hundreds attended an emotional gathering at Milwaukee’s Rose Park to mark the passing of slain rapper Nispey Hussle.  The artist was shot and killed Sunday, March 31 in Los Angeles.

“I think of a balloon release as thanking a person for the life that they lived and the legacy that they left behind,” said the vigil's organizer, Miela Fetaw.  Thirty-three balloons scattered in the sky -- one for each year Hussle was alive.  Each one carried an unintended message.

“You know,” Fetaw admitted, “It’s probably not a good thing that we didn’t consider the environmental component.”

Nationwide, there's a growing awareness of the problem, and it has energized legislation in state governments.  Bills to limit the intentional release of large numbers of balloons are being aired in legislatures in Arizona, Connecticut, Massachusetts, New Hampshire, New Jersey, New York and Rhode Island, in addition to Maine, said Jennifer Schultz of the National Conference of State Legislatures.

Texas is also considering a study on windblown and waterborne litter that would include helium balloons, she said. A similar proposal was terminated while in committee in the Kentucky Legislature last month.

These states would join California, Connecticut, Florida, Tennessee and Virginia -- all of which already have laws that ban or restrict launches. California's law applies only to foil balloons, while Connecticut is currently considering a stricter law.

“You wouldn’t throw it on the ground,” said Danielle Vosburgh with the nonprofit organization, Balloons Blow, based in Florida.  “Why is it OK to release in the air?”

Vosburgh aims to educate people about the often-deadly consequences.

“You might not know, but those balloons all come back down and harm animals.  We know that’s not what you are trying to do,” she said.

Photos taken from around the world are posted on the group’s website, showing animals eating and dying because of the latex and mylar materials.  Balloon strings also get tangled and digested by wildlife.  Another concern?  The waste of helium -- a finite resource -- needed to run equipment like MRI scanners.

Vosburgh said balloons have been found to travel hundreds, even thousands of miles.  One photo posted on Balloons Blow showed a deflated latex balloon that washed ashore in 2013 in Flager County Florida.  The balloon was from a martial arts and sports training center in New Philadelphia, Ohio that celebrated a grand opening a few days earlier.  The balloon traveled roughly 800 miles. 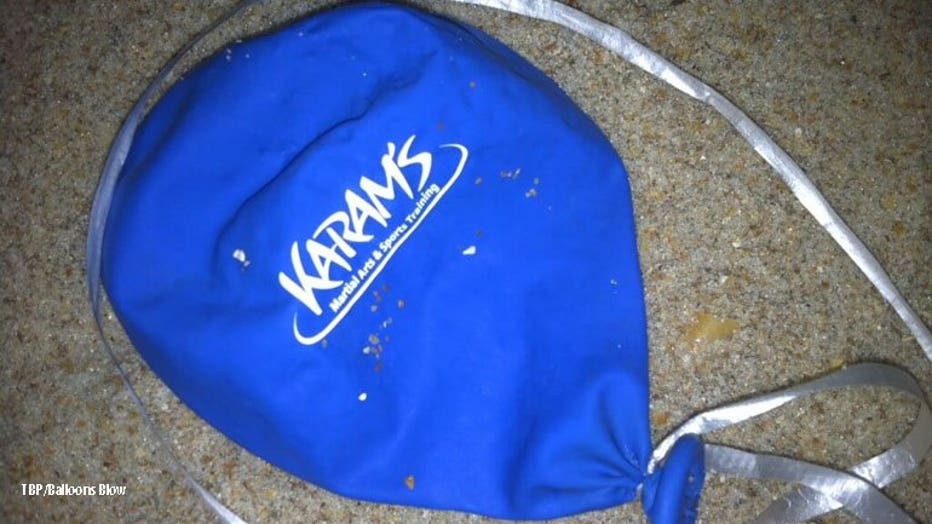 Even though they are marketed as “biodegradable,” when they land, it can often take years to break down.  Vosburgh said she keeps every balloon she finds on the beach near her home.  She said she’s testing how long the balloons take to biodegrade.  One balloon has been in her backyard for seven years.  Many consider it litter.

“Thanks for bringing it to my attention,” said Milwaukee Alderman Russell Stamper.  “I haven’t thought of balloon releases as littering, but they do come back down.”

Stamper helped usher in a stricter city ordinance on litter that went into effect April 1.  Now, anyone caught littering is subject to a $500 fine, a tenfold increase to the previous fine.

Chapter 79-7 of the Milwaukee Solid Waste Regulations defines “litter” as the following:

When asked, Bill Arnold, the public information manager with the City of Milwaukee told FOX6 that “balloon releases are not covered in the ordinance and are not considered instances of littering.”

“My biggest pet peeve is litter,” said Stamper.  “So, if there is a way to prevent , I would definitely like to educate the community on it.”

The New Jersey-based Balloon Council, which represents manufacturers, wholesalers, distributors and retailers, used to be opposed to bans on balloon releases because of the impact on small businesses. These days, the council still prefers education over legislation, but it is not opposing any of the legislative efforts to stop balloon releases.

"The balloon council feels that all balloons should be deflated and properly disposed of," said spokeswoman Lorna O'Hara. "There is a heightened attention across the globe. We're rising to what's happening in the United States and globally."

Education is key, but because of their connection to death, balloon releases are a delicate, sensitive topic.

“I don’t believe you ever really get over your grief.  I think it grows and changes with you.  There is no right or wrong way to do any of this,” said Kiri Meyer, a child and family therapist at Starbright Grief Guidance, LLC, specializing in grief and trauma.  “I had one kid say to me once, ‘I like balloons, but did you hear that animals eat them?’  I was like, ‘I did hear that.’  They said, ‘Why should an animal have to die just because my dad died?’  And I was like, 'Wow – that’s a really profound thought.'"

Meyer has been offering alternatives to her clients for years, but acknowledged the symbolic power of sending something up to heaven.

“I think that is what they’re worried about -- losing that effect and moment.  I think there are still so many things that we can do that are more eco-friendly that can still give us that moment,” Meyer said.

An event that can also help or impact others can often be more impactful than a momentary balloon release.

“This person who died -- this is in honor of them and it’s going to be here for generations.  I see a lot of kids play under trees once it’s there for their loved one who died,” said Meyer.

While no one is criticizing those who launch balloons, it is important to think about the impacts of our actions before a release.  By looking in -- instead of looking up -- Meyer and others hope to educate about this hidden cost of mourning.

“As a society,” Meyer said, “We have a responsibility to help educate each other to make better choices, not only for humans, but for the world we live in.”