MILWAUKEE - A Milwaukee therapist charged with sexually exploiting three clients had already been arrested for rape four times before he obtained his first counseling license.

FOX6 Investigators obtained the arrest records for George Ramsey, 62, through a public records request to Milwaukee Police. The four incidents – from 1997 through 2002 – raise questions about why the state of Wisconsin later granted Ramsey a license to do substance abuse counseling and, eventually, a license to do broader professional counseling.

Those licenses are now in jeopardy as Ramsey is facing sexual misconduct charges involving three female clients over a three-year period from 2018 to 2021.

"He should have never become a counselor," said James Copening, a former client of Ramsey's at Achievement Associates in Milwaukee.

Copening saw Ramsey in group therapy after developing an addiction to opiates that, he says, started when a grenade he bought at a rummage sale blew up in his hand, leaving him with partial fingers on his left hand.

"You didn’t do what George says the George way, ‘Oh, you're not getting your Suboxone this week,'" said Copening. 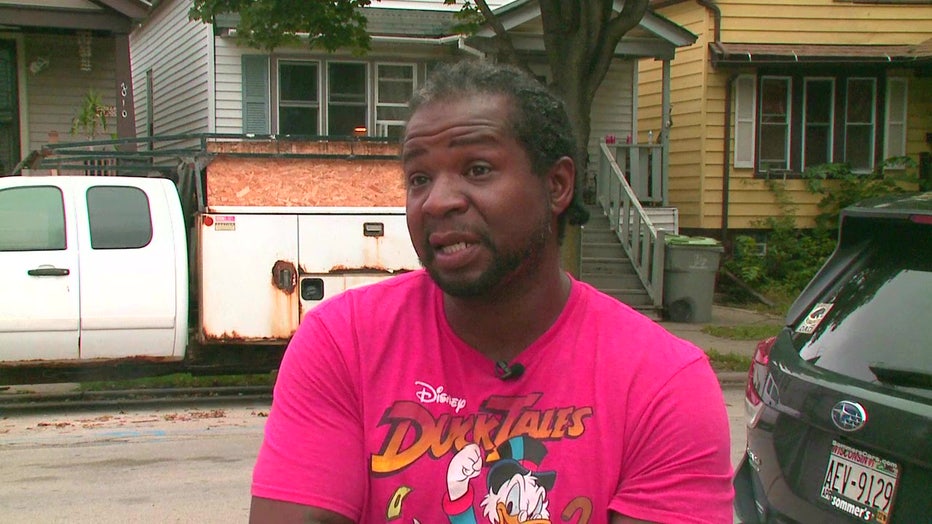 James Copening was a client of Ramsey's in group therapy at Achievement Associates at 5228 W. Fond du Lac Avenue in Milwaukee

Copening said he was at the clinic on Fond du Lac Avenue in Milwaukee in 2018 when police walked in the door.

"They came into the clinic and arrested him," he said.

"Can you explain that?" asked FOX6 Investigator Bryan Polcyn as he followed Ramsey out of a Milwaukee County courtroom on March 11.

Ramsey did not respond. 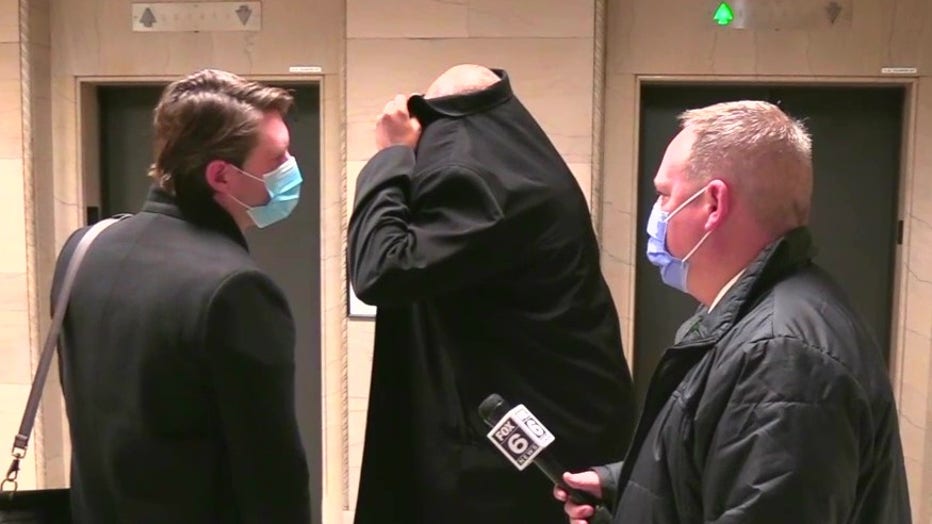 FOX6 Investigator Bryan Polcyn attempts to speak with Ramsey after a court hearing. Instead, Ramsey covered his face and his attorney declined comment.

The 62-year-old is a licensed professional counselor and clinical substance abuse counselor with master’s degrees in counseling and psychology, a doctorate in theology and, according to family and friends who wrote letters of support to the court, he has "a high degree of integrity, responsibility and ambition."

But it's not how Ramsey behaved with Copening that has him in trouble. It's what the counselor is accused of doing to his female clients that could not only cost him his professional licenses, it could land him in prison.

In March 2021, the Milwaukee County District Attorney's Office charged Ramsey with three counts of sexual exploitation by a therapist.

The criminal complaint details allegations by three different women who say Ramsey made sexual advances, hugged them after sessions, unzipped their clothing, exposed himself, groped, rubbed, touched, kissed and even forced them to engage in sex acts behind closed doors.

The allegations include two women who saw Ramsey at the now-shuttered Achievement Associates clinic on Fond du Lac Avenue. A third woman says Ramsey sexually assaulted her at his own clinic – New Beginnings Wellness Center at 35th and Sherman – in 2021.

It was not until after the third alleged victim came forward that a prosecutor filed criminal charges. She told police she feared for her life when Ramsey demanded she perform a sex act, then opened a drawer with a handgun inside.

"We know that is a power relationship," said Ian Henderson, policy director for the Wisconsin Coalition Against Sexual Assault. "People use their positions of power not only to access victims, they also exploit that power and trust relationship as a means of avoiding detection."

By the time Ramsey applied for his first counseling license at age 46, he'd already accumulated some hefty baggage, including more than a dozen criminal arrests – at least four of which led to felony convictions.

He was convicted of robbery in California at age 24, escape from custody in Milwaukee at 35, and illegal possession of a gun by a felon at age 43. 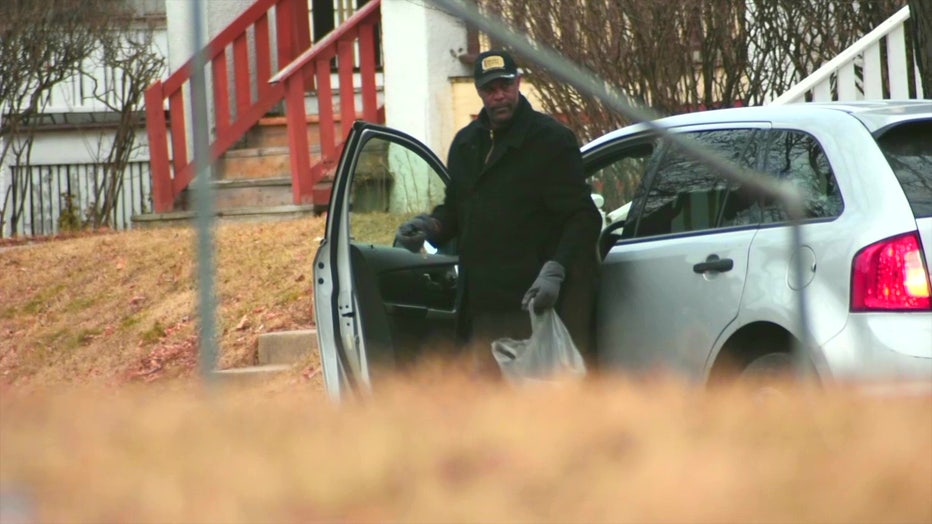 Ramsey is out on $7,500 cash bond. He told a pre-trial services agency he lives in Brown Deer, but FOX6 found him at his brother's house on N. 26th Street in Milwaukee.

"I don’t see how a convicted felon is a licensed therapist," said Copening, who recalls Ramsey bragging about his own history of drug addiction in group therapy sessions.

"Me and my boys used to kick it," Copening recalls him saying. "We’d go get some crack. Those were the good old days."

Cooper is Vice President of the Rape, Abuse and Incest National Network – or RAINN. She is far more troubled by something else we found in Ramsey's past.

Between 1997 and 2002, four different women told Milwaukee police they had been raped.

"Do you know what the common thread is?" Polcyn asked Ramsey. "You were arrested for all four of them." 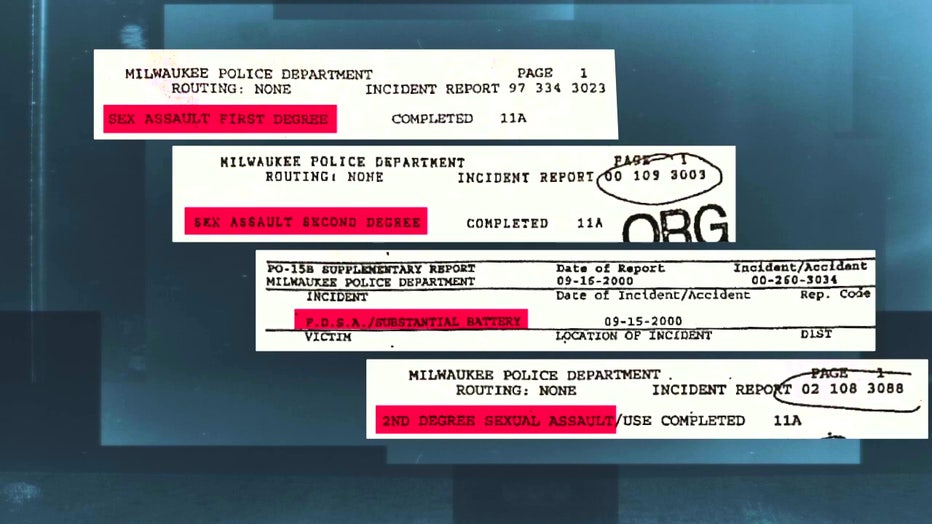 Two said Ramsey was armed with a knife at the time. One said he tried to kill her, as she called 911 from a payphone, naked and bleeding.

But prosecutors never charged him with any of those crimes, because - according to police – the victims were either uncooperative or failed to show up for scheduled appointments at the district attorney's office.

"This might be just another example of that particular system failing survivors," Henderson said.

"Who listens to an addict nowadays?" Copening added.

Instead of flagging Ramsey as a potential serial rapist after four arrests in five years, police filed the cases away in boxes. Four years after that – in 2006 – Ramsey filed an application with the Wisconsin Department of Regulation and Licensing (DRL) to become a substance abuse counselor-in-training.

"Should this person be in a position of trust?" Cooper asked. "Especially in a therapeutic context?"

The state did run a background check on Ramsey before approving his license, but we'll never know what was in those files. DRL – now called the Wisconsin Department of Safety and Professional Services, or DSPS – has already destroyed them.

DSPS only keeps application-related records for five years. A DSPS spokesperson says the sexual assault arrests "may not have been included…if they did not lead to criminal charges."

"We call that falling through the cracks," Cooper said, "and you’ve clearly identified a huge, gaping crack here."

Cooper said it's a serious problem without an easy solution, since state law only allows employers to ask about convictions or pending charges – not arrests.

"I'm not sure quite where it would land from a legal context," Cooper said.

"I think it is a tough one," Henderson agreed.

While Ramsey was not charged with any of the four sexual assaults, he was charged – and convicted – of multiple other crimes, including four felonies. Still, the state deemed him qualified to hold a position of trust.

"How did you get a therapy license with a record like that?" Polcyn asked Ramsey, who walked silently through the halls of the courthouse with his jacket pulled up over his head to shield his face from the camera.

"We're not going to make any comment," said Matt Last, Ramsey's third attorney in little more than a year. "You need to do better research."

FOX6's research speaks for itself. Copening said he is speaking up for victims who don't have a voice.

"I told George, 'You're going to come down one day. And I pray to God that I can watch you come down. Because you just, you’re just abusive.' He’s just an abusive man," he said.

Ramsey is free on $7,500 cash bond. One of those bond conditions is that he not practice therapy. He's also supposed to tell the court where he lives and where he works.

For the past year, however, he's been telling a pretrial service agency called Justice Point that he lives at NorthPointe Apartments in Brown Deer. A property manager there said that's not true. He also told Justice Point he works for a temp agency in Greenfield. The agency tells FOX6 he hasn't worked there for many months.

A spokesperson for Justice Point says that information is self-reported by the defendants they supervise, but Justice Point agents do not routinely verify if the information is accurate. So far, they say, Ramsey has kept his supervision appointments, all of which have been over the phone.

Ramsey is scheduled to go to trial in June. The state says it will recommend seven to 10 years in prison if Ramsey pleads guilty before trial.