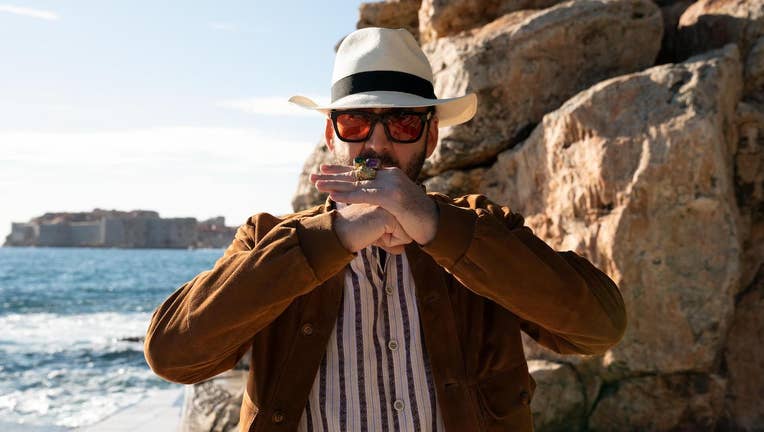 Austin, TX - This year, FOX film critics Allison Shoemaker and Caroline Siede were on the ground for the wild, weird marathon that is South by Southwest (SXSW), the mega-festival/conference that features the worlds of film, television, music, comedy, art, technology and more. Here Caroline Siede recounts a truly surreal evening from the first week of the fest.

AUSTIN, TX - Being a film critic can be an odd thing. You take something you love and turn it into work. You rub elbows with the very people whose work you critique. And sometimes you find yourself sitting seven seats and one aisle away from Nicolas Cage at the premiere of a movie where he plays Nicolas Cage.

Cage’s presence dominated the early days of this year’s South by Southwest (SXSW) film festival — the first to be held in-person since 2019. Bobble-headed versions of Cage’s various characters wandered the streets for photo ops. Promoters handed out temporary tattoos of the actor. And one enthusiastic fan started a viral campaign just to get Cage’s attention. (The Austin Convention Center was plastered with signs that read "Nicolas Cage! I’m your biggest fan. Please call me" with a phone number at the bottom — a stunt that worked.) 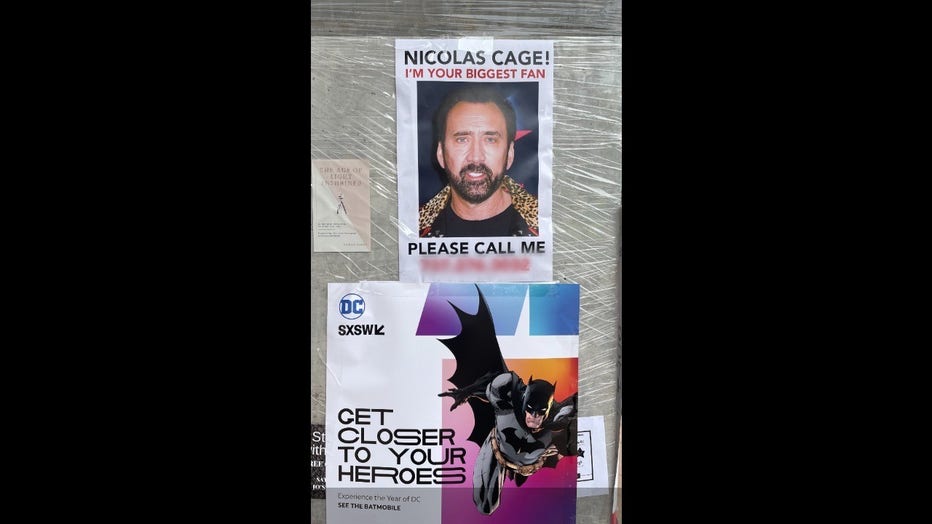 That all culminated in the Mar. 12 world premiere of "The Unbearable Weight of Massive Talent," the new meta action comedy from writer/director Tom Gormican in which Cage plays a fictionalized version of himself — one that’s ostensibly a little bit heightened, although given Cage’s famously over-the-top personality, who can really say. (Remarkably, Gormican wrote the movie having never met Cage, with no idea whether the actor would actually want to sign on.) 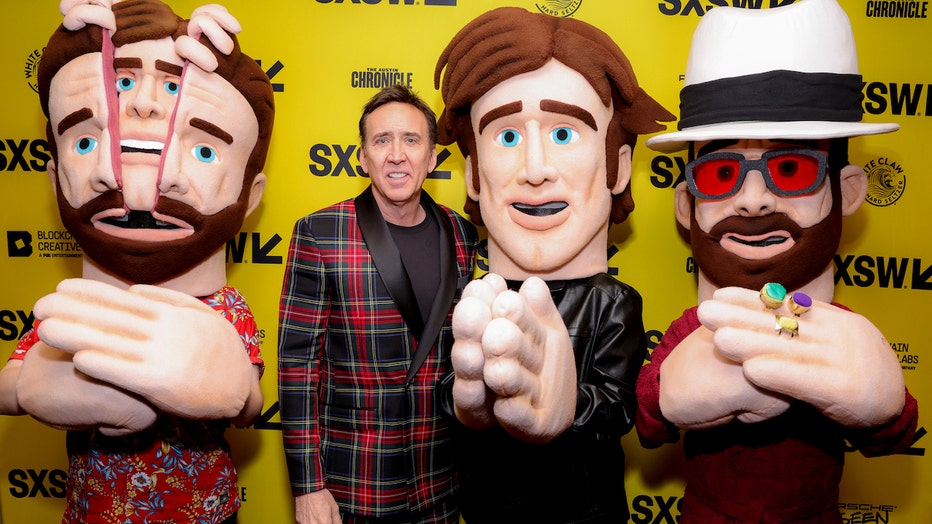 AUSTIN, TEXAS - MARCH 12: Nicolas Cage attends the premiere of "The Unbearable Weight of Massive Talent" during the 2022 SXSW Conference and Festivals at The Paramount Theatre on March 12, 2022 in Austin, Texas. (Photo by Rich Fury/Getty Images for S

I attended the screening with the intention of reviewing the film (which, incidentally, is quite good). But as I settled in for the delayed 10:30 p.m. screening, it quickly became clear this wasn’t going to be just an average movie premiere — even by SXSW standards. While it’s not unusual for stars to attend festival premieres (I’d seen Sandra Bullock and Daniel Radcliffe at the debut of "The Lost City" earlier that evening), it feels a little different when they’re actively picking apart their entire celebrity personas in the most meta Hollywood comedy since "Being John Malkovich."

The anticipation for the singular experience of watching a self-aware Nicolas Cage comedy alongside Cage himself gave the audience a palpable energy that was unlike anything I’ve really experienced at a film screening before — an enthusiasm that didn’t dim even after a lengthy wait outdoors in the unusually frosty Austin weather. When Cage entered the theater in a stylish red plaid suit to take his seat, the crowd burst into a round of thunderous applause. Someone a row ahead of me leapt to their feet to reveal they were wearing a jacket with a giant image of Cage’s face on it.

The crowd around me started chanting "Cage! Cage! Cage!" while I silently observed that Cage was taller than I expected him to be — a joke the movie itself would make not long after.

Indeed, in one way or another, all of the elements of that amped-up pre-show experience would be directly reflected back in "The Unbearable Weight," a movie that’s so in on the joke it sometimes feels like cinephile Twitter brought to life.

As "The Unbearable Weight" opens, the movie’s down-on-his-luck version of Cage is struggling with the idea that his movie star days are behind him, while his relationships with his ex-wife Sally (Sharon Horgan) and teenage daughter Addy (Lily Sheen) are in even worse shape than his career. Desperate for work, Cage agrees to take a paid gig attending the birthday party of an eccentric Spanish billionaire and Nic Cage superfan named Javi Gutierrez (Pedro Pascal).

But things take a hard left turn when two CIA agents (Tiffany Haddish and Ike Barinholtz) claim Javi is actually a dangerous cartel leader, a revelation made when they recruit Cage to go undercover and help them find a kidnapping victim they believe is hidden on the billionaire’s compound. Luckily, Cage has a very particular set of skills he’s acquired over a long career in films like "Gone in 60 Seconds," "National Treasure" and "Face/Off." 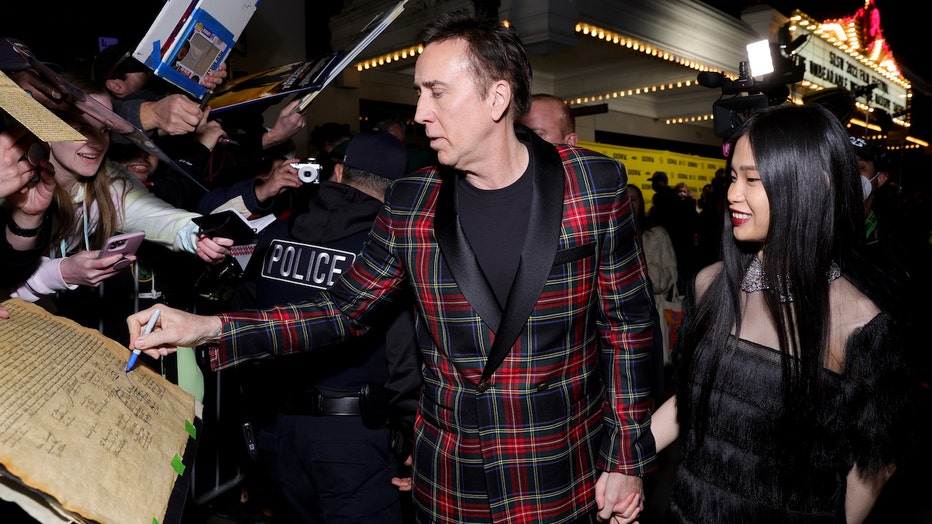 AUSTIN, TEXAS - MARCH 12: Nicolas Cage attends the premiere of "The Unbearable Weight of Massive Talent" during the 2022 SXSW Conference and Festivals at The Paramount Theatre on March 12, 2022 in Austin, Texas. (Photo by Rich Fury/Getty Images for S

In any setting, "The Unbearable Weight" will be a delightfully surreal ouroboros — as much a loving send-up of modern movie-making as it is an affectionate ribbing of Cage’s celebrity persona. But it was especially surreal to watch it knowing the man himself would be hearing us laugh at every self-effacing joke and loving homage to his 40-year career, which includes movies ranging from "Moonstruck," "Con-Air" and "Leaving Las Vegas" to "Guarding Tess" and "Croods 2" — all of which get explicit shout-outs in "The Unbearable Weight."

I was sitting close enough to Cage that I couldn’t help but sneak an occasional peek at him throughout the film, just to watch him take it all in. From the outside, at least, he was the epitome of cool, calm and collected, even as the crowd responded to every self-referential joke with whoops and hollers so loud it was often hard to hear the dialogue for long stretches. (The line "‘Mandy’ is a masterpiece" earned the biggest applause of the night, but my personal favorite reference involved "Captain Corelli's Mandolin.")

At a post-screening Q&A that started well past midnight, Cage revealed that many of the wackier elements in the film were ones he’d pushed for — including a runner where he argues with an egotistical de-aged version of himself he modeled on an infamous 1990 talk show appearance. Later in the Q&A, Cage uttered the surreal sentence, "How can you have a Nic Cage movie and not say ‘Not the bees!’?" while explaining his request to include a moment that pays homage to his much-memed performance in the 2006 "Wicker Man" remake.

(When "The Unbearable Weight" debuts to the general public in April, just know that a you’ll-know-it-when-you-see-it kiss was Cage’s idea too.)

Nicolas Cage answers a fan question during a Q&A following the premiere of "The Unbearable Weight of Massive Talent" at the 2022 SXSW Film Festival. (Video: Caroline Siede/FOX)

One fan took to the Q&A mic to explain he didn’t have a question, he just wanted to give Cage a rose — which the actor happily accepted and held for the rest of the event. "How strange was it to play yourself?" another fan asked. "You have no idea," Cage responded. But perhaps nothing is stranger than watching Cage himself stand on stage and enthusiastically quote Gormican’s sentiment that "neurotic Cage is the best Nic Cage."

Indeed, by the end of the night, the lines between life and art had all but vanished. The fan who’d hung up all those posters around Austin got a chance to ask a question about what style of acting Cage would like to try next. (His answer: A musical!) Then Pascal jumped in to joke that this Austin super fan was stealing his role, clarifying that not only does he play a Cage superfan in the movie, he’s also one in real life as well.

In fact, according to Cage, his onscreen dynamic with Pascal very much mirrors the kinship they built behind-the-scene as well, which probably explains why the warm but complicated friendship between Nic and Javi is easily the best thing about "The Unbearable Weight of Massive Talent." For as much as Gormican’s film is a meta action comedy, it’s also a surprisingly poignant platonic love story about the challenges of making new friends in middle age. (Pascal is so good in the role, he almost steals the movie from Cage at points, which is no small feat.) 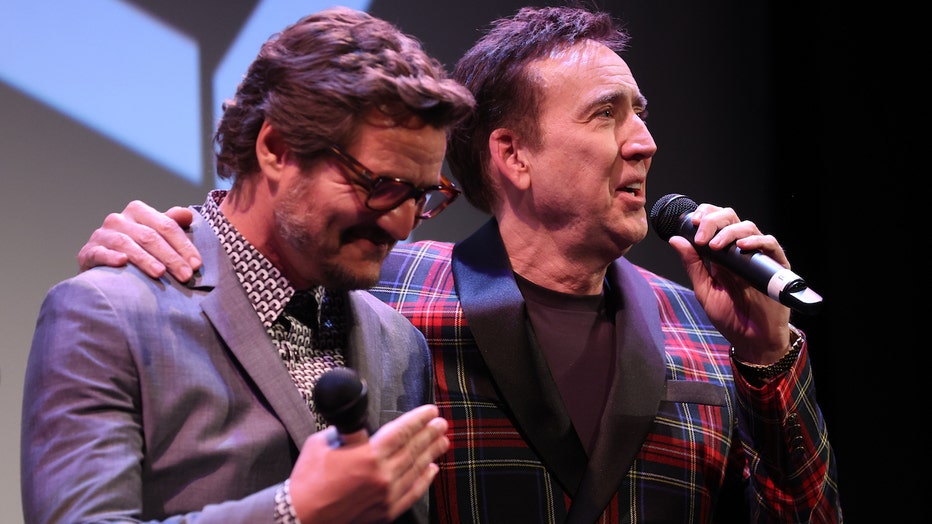 AUSTIN, TEXAS - MARCH 12: Pedro Pascal and Nicolas Cage attend the premiere of "The Unbearable Weight of Massive Talent" during the 2022 SXSW Conference and Festivals at The Paramount Theatre on March 12, 2022 in Austin, Texas. (Photo by Rich Fury/Ge

"Whether you like it or not, you have a gift," Javi tells Nic when the actor reveals he’s considering quitting show business. And that’s clearly how the enthusiastic SXSW crowd felt as well. SXSW director of film Janet Pierson ended the evening by presenting Cage with a giant belt buckle to commemorate "40 years of massive talent," which the actor held aloft and promised to wear to encourage him to keep surprising and entertaining audiences.

On the back of his critically acclaimed turn in 2021’s "Pig" and ahead of his upcoming role as Count Dracula in "Renfield," "The Unbearable Weight of Massive Talent" makes one thing clear: It’s Nic Cage’s world. We’re just living in it.

"The Unbearable Weight of Massive Talent" opens in theaters nationwide on April 22.

Brush up on these Nicolas Cage classics, streaming (for free!) on Tubi

Con Air (1997): Forget "Snakes on a Plane." This is Cage on a plane! And Malkovich on a plane! And Cusack and Buscemi and Rhames and Chappelle on a plane! And a jail break on a plane! What more do you need in cinema? Rated R. 115 minutes. Dir: Simon West. Featuring: Nicolas Cage, John Cusack, John Malkovich, Steve Buscemi, Ving Rhames, Colm Meaney, Dave Chappelle.

Guarding Tess (1994): The legendary Shirley Maclaine earned a Golden Globe nod for this dramedy, playing a former First Lady of the United States who seems to make exasperating her chief Secret Service agent (Nicolas Cage) her top priority. MacLaine is good, of course, but "Tess" is a true two-hander, and the dynamic between these two powerhouse performers ensures that even when the story goes a little off the rails, the movie never does. Rated PG-13. 95 minutes. Dir: Hugh Wilson. Also featuring Austin Pendleton, Edward Albert, James Rebhorn, Richard Griffiths.

Leaving Las Vegas (1995): This is the movie to show someone who somehow still believes that Nicolas Cage isn’t a generational talent. It earned him an Academy Award for Best Actor, and that statuette was well-deserved. Not a light viewing experience, but an incredibly worthwhile one. Rated R. 111 minutes. Dir: Mike Figgis. Also featuring Elisabeth Shue, Julian Sands, Richard Lewis, Steven Weber.