MILTON — It came to him in a vision.  A former Wisconsin therapist says he 'saw' his client's missing husband dead, in a garbage can. Police say they were "very curious" about those visions, especially because of what the therapist was doing with his client that ultimately cost him his license.

Gary Jones thought he was confiding in one of his client's multiple personalities. He did not expect her to tell police about his visions of her missing husband.

Jones tells the FOX6 Investigators he has a 'gift,' a natural born ability to see things other people can't.

"Are they really visions or is it something that actually happened?" pondered Mark Crum, the missing man's brother.

FOX6 tried to ask the former therapist about his visions of a client's missing husband. 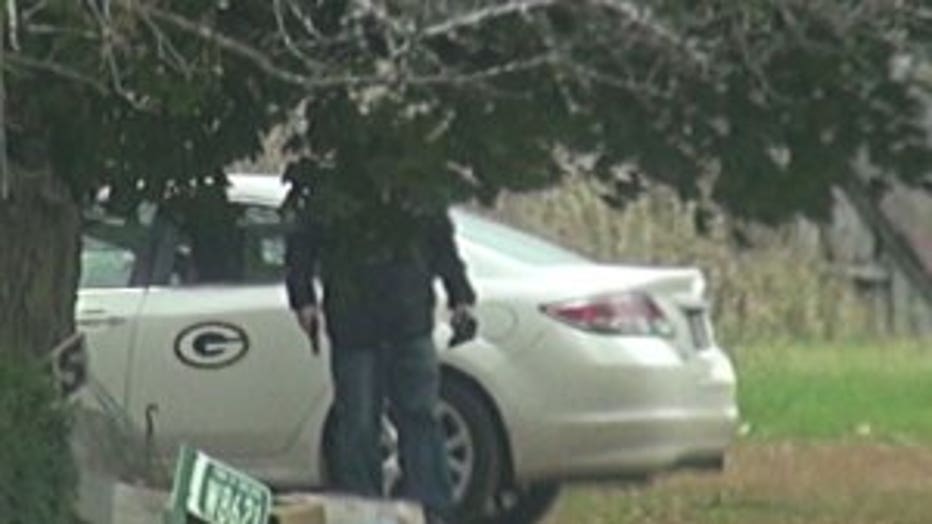 When FOX6 Investigator Bryan Polcyn tried to interview Gary Jones in his front yard, the former therapist went into his house and came out with a handgun.

"I'd like to talk to you about the visions you had of Adam Mills' dead body," Bryan Polcyn said, as he approached Jones outside his Fort Atkinson area farmhouse.

"You are on private property. I will have you arrested," Jones replied, walking away from the camera.

Jones walked into his house and emerged just seconds later. Only this time, he was armed.

"Is that a gun in your hand, Gary?" Polcyn called from the shoulder of Perry Road. "You just pointed a gun at me!"

"I did not point any gun at you, you piece of crap," Jones shot back. "Get out of here now!"

The FOX6 Investigators called 911 and the Jefferson County Sheriff's Office responded with multiple squads. Deputies reviewed the video on scene. Turns out, a bush blocked the view of where Jones had been pointing his weapon. But it was clear he had one.

"You have him on camera with a gun?" Deputy Heather Larson asked.

"With a gun, yes," Polcyn replied.

The Jefferson County Sheriff's Office is seeking criminal charges against Jones for disorderly conduct and use of a dangerous weapon in connection with his display of a handgun to FOX6 News. The Jefferson County district attorney is reviewing those recommendations. But the case we came to talk to Jones about remains a mystery.

"This is a big deal for us," Chief Marquardt said. "I typically work in small towns, so haven't had to deal with one like this."

Adam Mills was married with children. One night, police say, he got into an argument with his wife, left the house to go for a walk and never came back.

"Left without his phone, without his keys. Started walking east and that was all anybody knew," said Mark Crum, Mills' brother.

Friends and relatives scoured the city, passed out flyers and created a Facebook page dedicated to the search, but -- aside from an occasional false sighting -- the search turned up nothing.

"He is not one to walk out on his kids and not come back," Crum said. 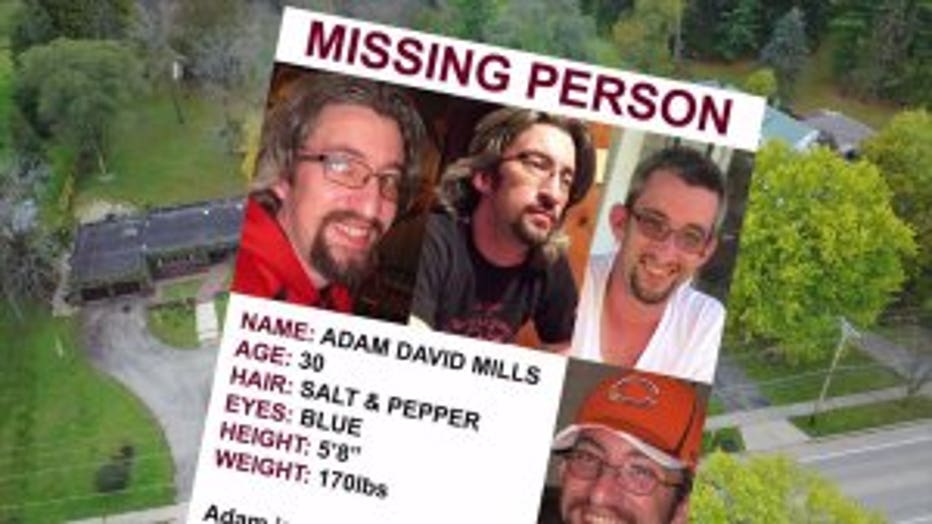 Adam Mills has been missing since leaving his Milton home on May 27, 2015.

"It just got more and more odd, I guess, that he hasn't reappeared," Marquardt said.

The Milton police chief said anything remains possible, from a willful disappearance, to a tragic accident, to homicide.  One thing he knows for sure is that Mills has made no attempt to contact relatives.

"Which is really what drives the family's concern, and my concern, that foul play might be involved," Marquardt said.

That makes Gary Jones' peculiar connection to the case all the more troubling.

"Do you want to talk about the lines you crossed with three of your patients?" Polcyn asked, just before Jones went to retrieve his pistol.

"Do you want to talk about how you would like it if you lost your job?" Jones said.

Gary Jones used to be a licensed professional counselor in Janesville until the state found he'd had inappropriate, romantic relationships with three of his patients.  One of them was a married woman -- the wife of Adam Mills.

"It was just kind of shocking. How long has this been going on?" Crum said. 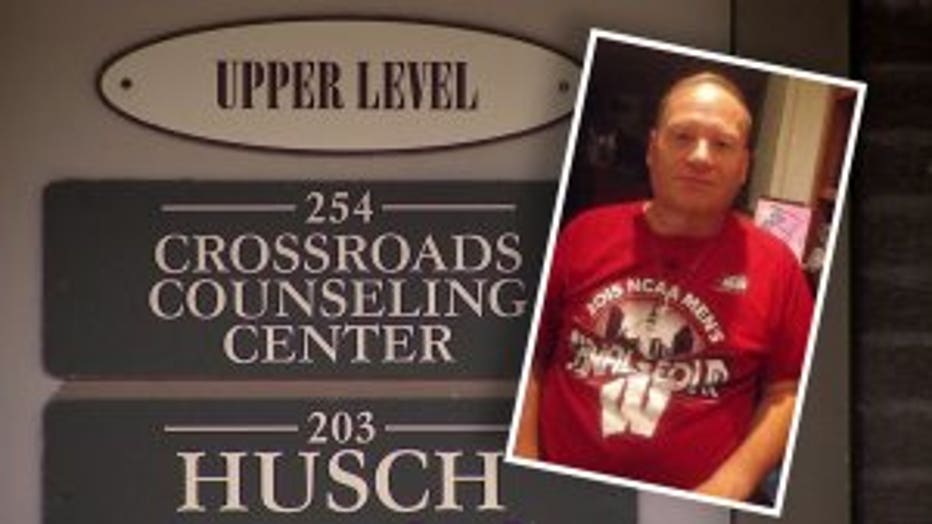 After Mills vanished, Jones pursued a romantic relationship with Mills' wife who was also Jones' mental health patient at Crossroads Counseling in Janesville.

The FOX6 Investigators obtained 268 pages of records from the Wisconsin Department of Safety and Professional Services detailing the disciplinary case against Jones.  He surrendered his therapy license last year.

"A lot of it, to me, is kind of suspicious stuff," Crum said.

According to the reports, Jones had been treating Mrs. Mills for Dissociative Identity Disorder -- or multiple personalities -- for nearly a year.

Case files show Jones called Mrs. Mills from his personal phone the next day, after Adam Mills walked out. He called twice more a week later and again a few days after that. Then, on June 12th, he texted an urgent message asking his patient to meet him at his house. He said he'd had a pair of visions.

One of those visions, which Jones described as a "hallucination," involved a "creature covered in mud," which he took to mean Mills' body was in a swamp.

The other vision was more explicit. He told police he saw Adam Mills, dead in a garbage can. His arms were scrunched up. His head was sideways. His eyes were open. 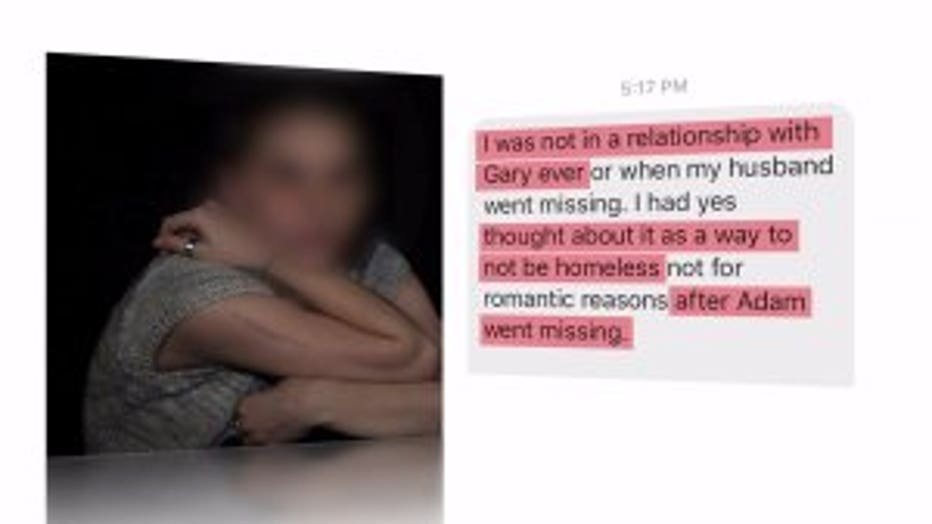 Mills' wife denies having a 'romantic relationship' with Jones.

"It was something that, that we looked into. I will say it that way," Marquardt said.

Police knew about the visions and the indiscretions, but did not tell the family. The chief says they held onto the information as part of their investigation. The family first learned of the therapist's conduct when FOX6 News presented them with the public records released by the state.

"I really don't know what to think of it. I mean, when I read it, I had to read it four or five times just to really let it sink in," Crum said.

"This is where it gets weird," Jones said.

"Oh yeah, he admits it gets weird," Crum said.

In a video recorded interview, Jones described how Mills' wife "touched a sphere" in his office and put some "evil stuff" inside. Then Jones touched the sphere, and felt an "electrical charge."  Soon after, he started having visions.

"I am sorry, bud, but if you think it's a practice and you feel it's acceptable, then you shouldn't think it is weird," Crum said. 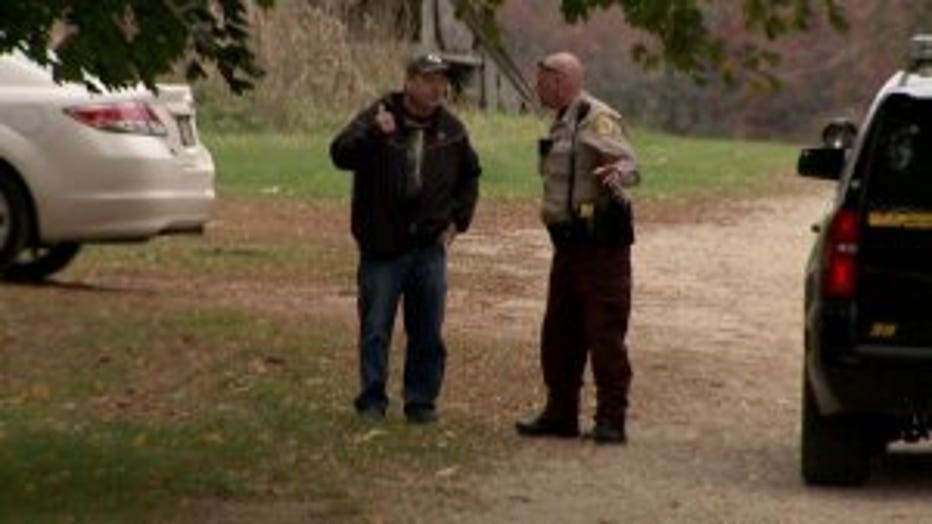 Jefferson County Sheriff's Office is recommending Jones be charged with disorderly conduct and use of a dangerous weapon in connection with his reaction to FOX6 News' attempt to interview him. The District Attorney's office says the case is under rev

It's not uncommon in missing persons cases for someone to claim they had a psychic vision.  But Jones wasn't just some psychic. He was a licensed professional treating the missing man's wife.

"Which made it even more bizarre," Marquardt said.

FOX6 News has chosen not to name Mills' wife or show you her face because she is a mental health patient who has not been accused of a crime.  She told  FOX6 she was "not in a relationship" with Jones, but admitted she "thought about it as a way to not be homeless... after Adam went missing."

She was "having a hard time" with her husband just before he disappeared, but insists they "loved each other."

As for Jones, she said "he could be a really scary man."

"Police are on the way to talk about the gun you aimed in my direction," Polcyn said.

"I didn't aim it in your direction. Quit being a liar," Jones said.

Both Jones and Mills' wife deny it, but state investigators say it is clear they were involved in a romantic relationship. Still, police say there is zero evidence that either of them did anything to cause Adam Mills' disappearance.  They don't even know if he is dead or still just missing.

"If you are out there and want to be left alone, that's cool, but let us know you are alive," Crum said.

The case will remain open until they do.

"Pretty much any outcome is a possibility here. We just simply don't know," Marquardt said. 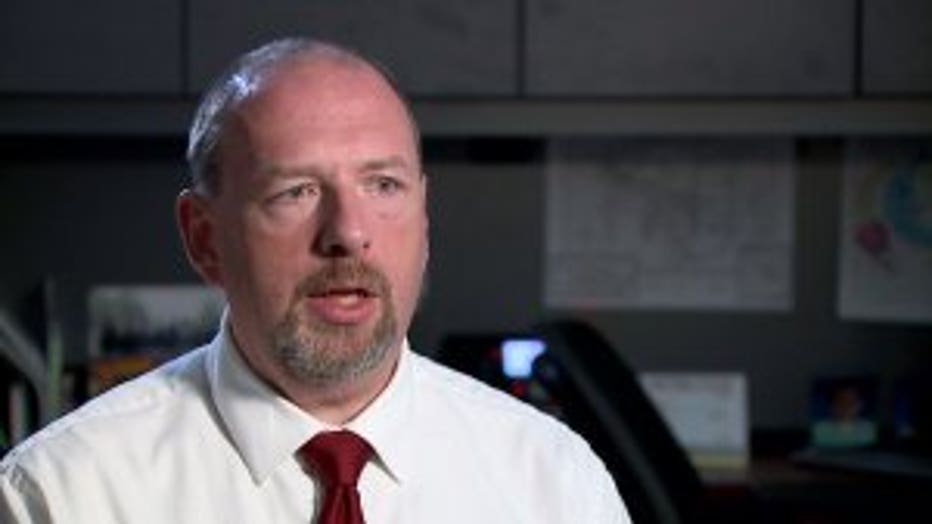 Milton Police Chief Scott Marquardt says they "looked into" Gary Jones' visions and romantic pursuit of Mills' wife, but have "no evidence" either was involved in Adam's disappearance.

After Mills' wife turned Gary Jones in to his employer, he was fired.

The state found he got fired at another counseling center and had relationships with two more patients before he finally lost his license.  He diagnosed all three women with having multiple personalities.

Mills' wife said she was later told by other clinicians that she does not suffer from Dissociative Identity Disorder at all.  She now wonders if Jones made it up.

Jones told police he used a technique called 'brainspotting' and that led to his visions. Brainspotting is a non-traditional therapy that uses eye position to access and release traumatic memories. It is similar to EMDR which has been around since the 1980s.  But none of the literature FOX6 News could find mentions anything about touching spheres or transferring evil thoughts that lead to psychic visions.

Jones now says brainspotting had nothing to do with his visions. Instead, he says they are a 'gift' he's had since birth.

Jones initially agreed to do an on-camera interview, and then changed his mind.