TEHRAN, Iran — A stampede broke out Tuesday at a funeral for a top Iranian general killed in a U.S. airstrike, and at least 56 people were killed and more than 200 were injured as thousands thronged the procession, Iranian news reports said.

There was no information as to what had set off the stampede. Online videos showed people lying apparently lifeless, their faces covered by clothing. Emergency crews performed CPR on others as people wailed in the background, crying out to God. 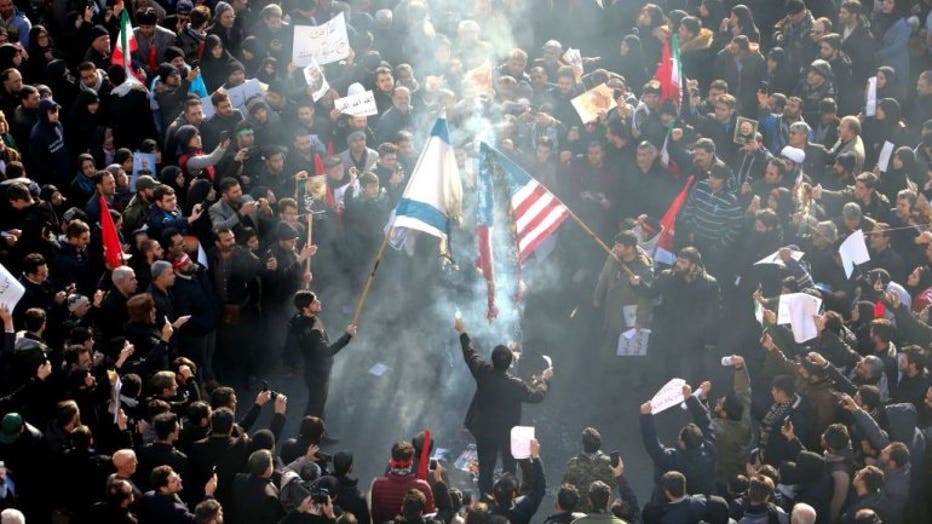 TOPSHOT - Iranians set a US and an Israeli flag on fire during a funeral procession organised to mourn the slain military commander Qasem Soleimani, Iraqi paramilitary chief Abu Mahdi al-Muhandis and other victims of a US attack in the capital Tehran

“Unfortunately as a result of the stampede, some of our compatriots have been injured and some have been killed during the funeral processions," Koulivand said.

Soleimani's burial was later delayed, with no new time given. Authorities cited concerns about the massive crowd that had gathered as a reason for the delay, the semi-official ISNA news agency said.

A procession in Tehran on Monday drew over 1 million people in the Iranian capital, crowding both main thoroughfares and side streets in Tehran. Such mass crowds can prove dangerous. A smaller stampede struck the 1989 funeral for Ayatollah Ruhollah Khomeini, killing at least eight people and injuring hundreds. 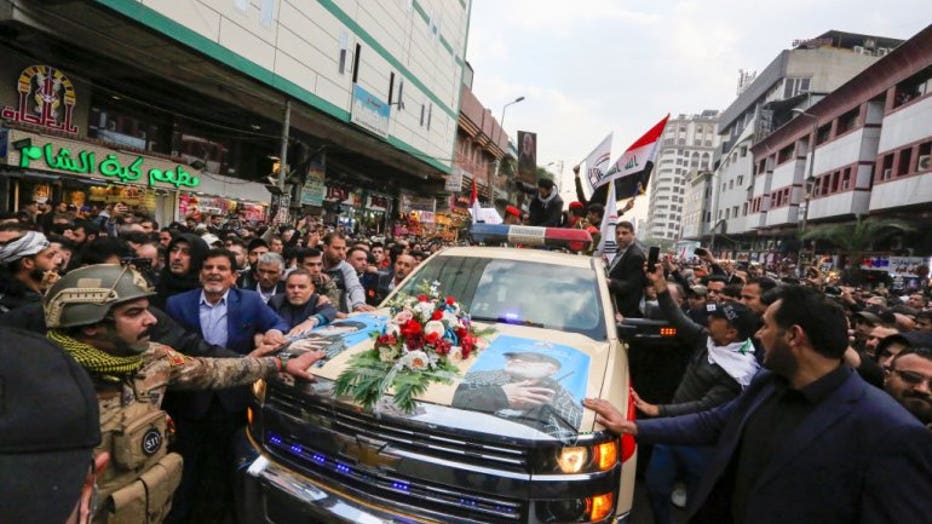 Soleimani's death in a drone strike on Friday has sparked calls across Iran for revenge against America, drastically raising tensions across the Middle East. The U.S. government warned ships of an unspecified threat from Iran across the region's waterways, crucial routes for global energy supplies. Meanwhile, the U.S. Air Force launched a drill with 52 fighter jets in Utah, just days after President Donald Trump threatened to hit 52 sites in Iran.

Earlier in the day, Hossein Salami, the new leader of Iran’s Revolutionary Guard, vowed to avenge Soleimani's death as he addressed a crowd of supporters gathered at the coffin in a central square in Kernan.

“We tell our enemies that we will retaliate but if they take another action we will set ablaze the places that they like and are passionate about," Salami said.

“Death to Israel!” the crowd shouted in response. Israel is a longtime regional foe of Iran.

The funeral processions in major cities over three days have been an unprecedented honor for Soleimani, viewed by Iranians as a national hero for his work leading the Guard’s expeditionary Quds Force. 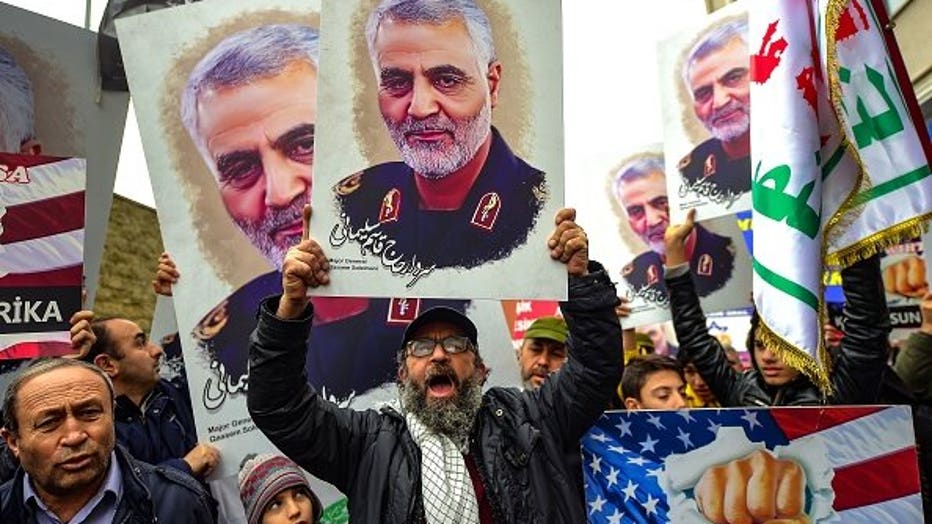 The U.S. blames him for killing U.S. troops in Iraq and accused him of plotting new attacks just before he was killed in the drone strike near Baghdad’s airport. Soleimani also led forces supporting Syrian President Bashar Assad in that country's civil war, and he also served as the point man for Iranian proxies in countries like Iraq, Lebanon and Yemen.

The U.S. is continuing to reinforce its own positions in the region, including repositioning some forces.

Soleimani's slaying already has pushed Tehran to abandon the remaining limits of its 2015 nuclear deal with world powers as his successor and others vow to take revenge. In Iraq, pro-Iranian factions in parliament have pushed to oust American troops from Iraqi soil following Soleimani's killing at the Baghdad airport.

In his eulogy to the crowd, Salami praised Soleimani's work, describing him as essential to backing Palestinian groups, Yemen's Houthi rebels and Shiite militias in Iraq and Syria. As a martyr, Soleimani represented an even greater threat to Iran's enemies, Salami said.

According to a report on Tuesday by the semi-official Tasnim news agency, Iran has worked up 13 sets of plans for revenge for Soleimani's killing. The report quoted Ali Shamkhani, the secretary of Iran’s Supreme National Security Council, as saying that even the weakest among them would be a “historic nightmare” for the U.S. He declined to elaborate. 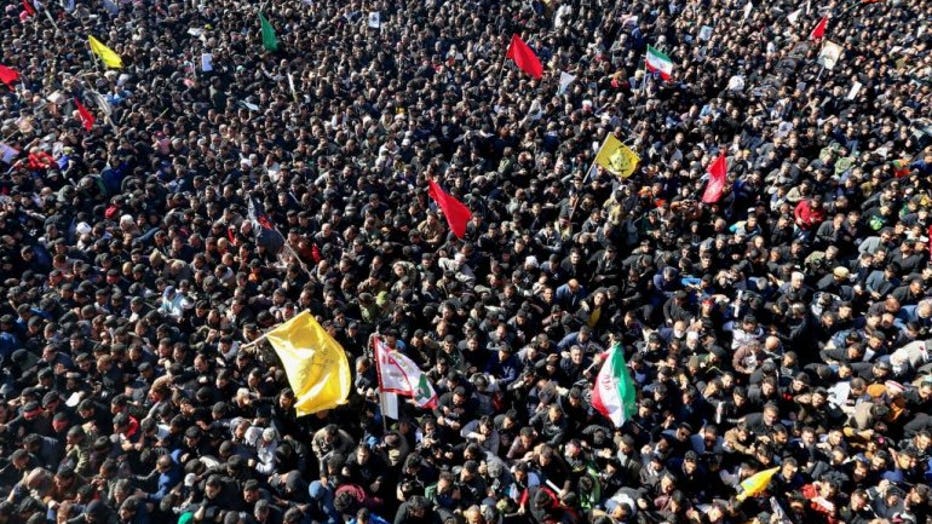 TOPSHOT - Iranian mourners gather during the final stage of funeral processions for slain top general Qasem Soleimani, in his hometown Kerman on January 7, 2020. - Soleimani was killed outside Baghdad airport on January 3 in a drone strike ordered by

“If the U.S. troops do not leave our region voluntarily and upright, we will do something to carry their bodies horizontally out," Shamkhani said.

The U.S. Maritime Administration warned ships across the Mideast, citing the rising threats. “The Iranian response to this action, if any, is unknown, but there remains the possibility of Iranian action against U.S. maritime interests in the region,” it said.

Oil tankers were targeted in mine attacks last year that the U.S. blamed on Iran. Tehran denied responsibility, although it did seize oil tankers around the crucial Strait of Hormuz, the narrow mouth of the Persian Gulf through which 20% of the world’s crude oil travels.

The U.S. Navy's Bahrain-based 5th Fleet said it would work with shippers in the region to minimize any possible threat.

The 5th Fleet “has and will continue to provide advice to merchant shipping as appropriate regarding recommended security precautions in light of the heightened tensions and threats in the region,” 5th Fleet spokesman Cmdr. Joshua Frey told The Associated Press.

Meanwhile, Iranian Gen. Alireza Tabgsiri, the chief of the Guard’s navy, issued his own warning.

“Our message to the enemies is to leave the region," Tabgsiri said, according to ISNA. The Guard routinely has tense encounters with the U.S. Navy in the Persian Gulf.

Iran's parliament, meanwhile, has passed an urgent bill declaring the U.S. military's command at the Pentagon and those acting on its behalf in Soleimani's killing as “terrorists," subject to Iranian sanctions. The measure appears to be an attempt to mirror a decision by President Trump in April to declare the Revolutionary Guard a “terrorist organization.”

The U.S. Defense Department used the Guard’s designation as a terror organization in the U.S. to support the strike that killed Soleimani. The decision by Iran’s parliament, done by a special procedure to speed the bill to law, comes as officials across the country threaten to retaliate for Soleimani’s killing.

The vote also saw lawmakers approve funding for the Quds Force with an additional 200 million euros, or about $224 million.

Also Tuesday, Iranian Foreign Minister Mohammad Javad Zarif said the U.S. had declined to issue him a visa to travel to New York for upcoming meetings at the United Nations. As the host of the U.N. headquarters, the U.S. is supposed to allow foreign officials to attend such meetings.

“This is because they fear someone will go there and tell the truth to the American people,” Zarif said. "But they are mistaken. The world is not limited to New York. You can speak with American people from Tehran too and we will do that.”

The U.S. State Department did not immediately respond to a request for comment.

Solemani will ultimately be laid to rest between the graves of Enayatollah Talebizadeh and Mohammad Hossein Yousef Elahi, two former Guard comrades. The two died in Operation Dawn 8 in Iran's 1980s war with Iraq in which Soleimani also took part, a 1986 amphibious assault that cut Iraq off from the Persian Gulf and led to the end of the bloody war that killed 1 million people.