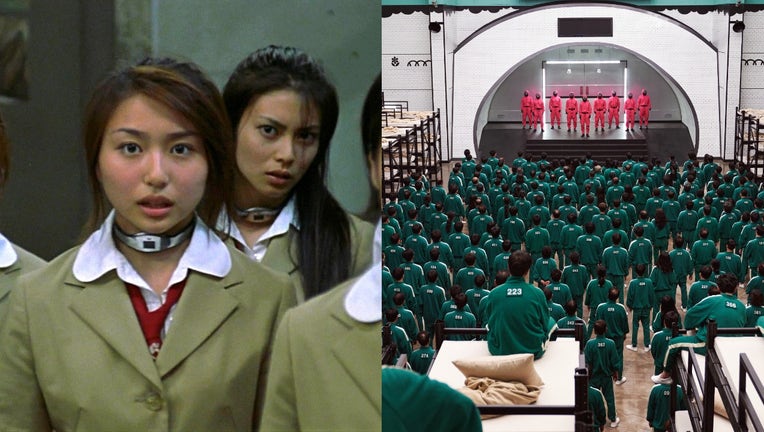 NEW YORK CITY - With sharp writing, a bizarre premise and episodes ending in literal cliff-hangers, it’s no surprise that Netflix’s South Korean TV series "Squid Game" has captivated audiences around the world. Centering on an underground competition in which contestants desperate for money play potentially deadly games, the series follows Seong Gi-hun (Lee Jung-jae), an underemployed chauffeur trying to pay off gambling debts. Though not every game requires participants to kill, the cash that pours into a gigantic piggy bank every time someone dies is a strong incentive — and a potent metaphor for capitalism.

The concept of life-and-death games isn’t a new one; the "Saw" and "Hunger Games" franchises offered variations on the trope. But the film that arguably launched the genre has yet to enter the U.S. mainstream: the 2000 Japanese movie "Battle Royale," currently streaming for free on Tubi. Tubi is owned by the FOX Corporation.

In the world of "Battle Royale," a high school class is selected at random each year to engage in a fight to the death, ostensibly an attempt to control a seemingly wayward youth population. The film focuses on two players in the latest "game," Shuya Nanahara (Tatsuya Fujiwara) and Noriko Nakagawa (Aki Maeda), who hope to take down the system. The film is as gruesome as its name might suggest, a Grand Guignol–esque affair with exploding heads and plenty of spurting blood. But it’s also a tender, contemplative film that pauses to give characters flashbacks that explain their present-day actions.

"Squid Game" borrows a few elements from "Battle Royale," including its use of the buoyant "Blue Danube Waltz" to heighten the horror. But while "Battle Royale" was warmly received by critics, it remains something of a cult classic, far less well-known than its mainstream successors. So why has "Squid Game" taken off where "Battle Royale" hasn’t? Social media undeniably plays a role — it’s easier to convince a friend to watch something off-the-beaten-path when you’ve got screen grabs at the ready. "Battle Royale" has plenty of moments that, had it premiered 20 years later, would likely have gone viral on Twitter or TikTok. (One example: a brief video of a preternaturally perky young woman, clad in a camo hat, who explains the rules of the game to a roomful of shaken students. "Boom!" she giggles to indicate what will happen if the teens try to remove the tracking devices around their necks.)

These days, not only do fans have multiple platforms on which to share media they’re excited about, but they can also share their experiences with and reflections on the complex stories that compel them — gender expression in "The Sopranos," reflections on the toxic masculinity of "Breaking Bad" fandom and essays on the racial politics of "Orange Is the New Black," and so on. Though "Squid Game" viewers may crave the whiplash-inducing twists, many are also grappling with the show on a higher level.

Critique the system: the politics of ‘Squid Game’ and ‘Battle Royale’

Following Netflix’s announcement that the toy company Funko was putting out a line of "Squid Game" figurines, many pointed out the irony of marketing toys inspired by a show rooted in an anti-capitalism ethos — and still, others argued out that the show’s very existence is itself mired in capitalism.

While "Battle Royale" doesn’t take aim at capitalism as directly as "Squid Game" does, it nevertheless pushes viewers to challenge the powers that be. Grown-ups are depicted as either weak and ineffectual, like Nanahara’s frustrated, out-of-work father, or bitter and vengeful, like Kitano (Takeshi Kitano), the class’s former teacher who volunteered to run the game and gleefully announces the names of his former students as they die.

It’s likely that mistrust will resonate with many viewers today, as young people around the world demand that adults take responsibility for the horrors they’ve wrought. In the wake of the shooting at Marjory Stoneman Douglas High School, survivors like activist X González have spoken out against lax gun control laws ("We call BS"), while climate change activist Greta Thunberg told world leaders at the United Nation that continued failure to act would devastate the world for future generations. Had the film been released today, its "don’t trust anyone over 30" mindset would surely have spawned countless think pieces and TikTok homages.

"Battle Royale" also faced another hurdle: It was a foreign-language film with an entirely Asian cast at a time when "inclusion" often meant briefly inserting a few minor non-White characters into sitcoms like "Friends" and "Frasier." More than a decade later, the "Hunger Games" movies were far bigger financial triumphs than "Battle Royale." Led by Jennifer Lawrence, the franchise had a largely white cast, and the announcement that Black actress Amandla Stenberg would play the character Rue was met with predictable, if disappointing, racially-motivated outrage.

Though there’s still work to be done, the cultural landscape has changed dramatically as people call for better, more nuanced representation. Works in foreign languages are no longer solely the purview of art house theaters — "Narcos" proved that a TV series that’s mostly in Spanish can be a runaway hit, and, with its Best Picture win at the 2020 Academy Awards, the South Korean film "Parasite" demonstrated that films not in English need not be relegated to the foreign language category.

At the 2020 Golden Globes, "Parasite" director Bong Joon-ho encouraged viewers to seek out international films: "Once you overcome the 1-inch-tall barrier of subtitles, you will be introduced to so many more amazing films." Here’s hoping that audiences will heed his advice — and that "Battle Royale" will get another shot at the popularity it deserves.