MILWAUKEE -- Former Vice President Joe Biden spoke exclusively with FOX6's Jason Calvi Tuesday, May 26, laying out what a virtual Democratic National Convention could look like -- with questions looming over whether the August event will be an in-person convention.

Biden has said it may need to be a virtual DNC, but said Tuesday the fate of the convention remains undecided.

City and state leaders pushed hard to host the DNC. Milwaukee Mayor Tom Barrett on Friday, May 22 compared it to competing in an NBA season and winning, but with the coronavirus pandemic raising big questions -- some are saying Milwaukee leaders should push to have the DNC in Milwaukee in 2024.

"Well, if I have anything to do with it, hopefully you're not going to need a rain check, but look, it's going to depend on the status of the situation of the time, and it's going to, it's hard to look several months into the future, but the top priority is going to be evaluating the situation, the health of the people of your state," said Biden. "You know, any decision needs to be led by scientists, public health officials. No decision has been made yet, that I'm aware of, anyway."

FOX6's Jason Calvi: "But you are the leading voice of the Democratic Party on the national stage. What do you want to happen?

"Well, I would love to be able to be in a position where we are able to have the convention," said Biden. "I would love to be in a position where I am going to be in Milwaukee. It may be that it ends up being a totally virtual campaign, or it may be a relatively small space group, instead of 50,000, 5,000, and have events and other venues. I just don't know. It's too early to make that decision, but has to be led by the docs in the scientist about what is the safest thing to do is."

FOX6's Jason Calvi: "I know Speaker Pelosi was pushing for what you just mentioned, having that large stadium with people 6 feet apart. Would you be comfortable with that?"

"Well, I'll be comfortable with whatever is the safest thing to do," said Biden. "I would like very much to be to address a large convention. I would very much like to be in a position that I was able to be, with all those folks who are part of the party, and work so hard, but again, it's going to be a decision. You can be assured you will see me in Wisconsin before the election. We are going to earn the votes of the people in Wisconsin, the folks in Wisconsin. It's gonna be hard to say now what form that that's going to take." 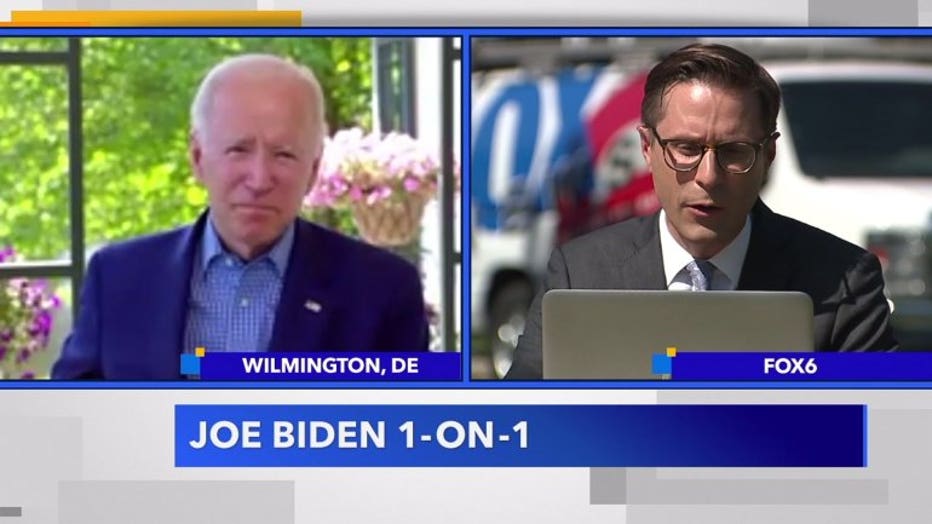 FOX6's Jason Calvi: "Conventions are all about excitement, and getting the American people to be excited with a particular candidate. What would be the ramification if you had the convention virtual and you spoke from for example your basement?"

"Well, it wouldn't be for my back porch like I am now but, look the fact is that it's all about people's health, and presidents are supposed to lead, and they're supposed to lead by example -- not walk away from the responsibilities, and so, from my standpoint, you're able to, I can imagine being able to, two nights in a row, three hours of prime time, have significant speakers put on a very well-orchestrated convention that, in fact, told a story about the party, had some of the better filmmakers help us put together, making sure we heard what we're for, the public knows what I am for, what my party is for, what we're gonna do, and I think it's possible to lay it out."

It's said the path to the White House runs through Wisconsin. President Donald Trump won the state by fewer than 23,000 votes. In Milwaukee, where voter turnout was down 40,000 in 2016, Biden is ahead of President Trump in the Marquette University Law School poll -- but that 46% to 43% is within the margin of error.