Saukville World War II soldier honored half a world away

A Saukville World War II soldier is being honored half a world away.

SAUKVILLE, Wis. - The basement of Fritz Learned’s home is full of treasures.

"I don’t hunt or I don’t fish," the Vietnam Army veteran said, describing bar signs, lunchboxes and other collectibles from a bygone era. "This is my hunting and fishing."

Some of those treasures buried over time.

"I just took it upstairs, put it on the kitchen table," Fritz said, unrolling a picture of soldiers in the 1940s. "And there’s Al." 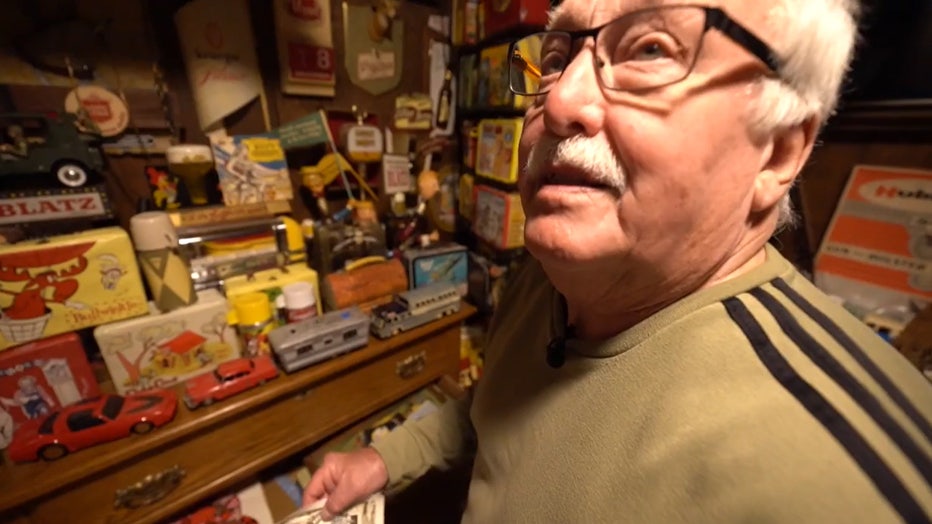 The face of a forgotten man. His death, the reason Fritz is alive.

"Just one incident changes everything like that," Fritz said.

Stories connect us across generations, across oceans. They are what brought a small group together in Saukville to watch a live stream more than half a world away – in Belgium. That is where the mystery of a missing soldier begins.

"I’m sorry, but my English is very bad," said Sonny Ver, a resident of Binche, Belgium. "I restore Jeeps from the Second World War. And as my grandmother says, I’ve become completely crazy." 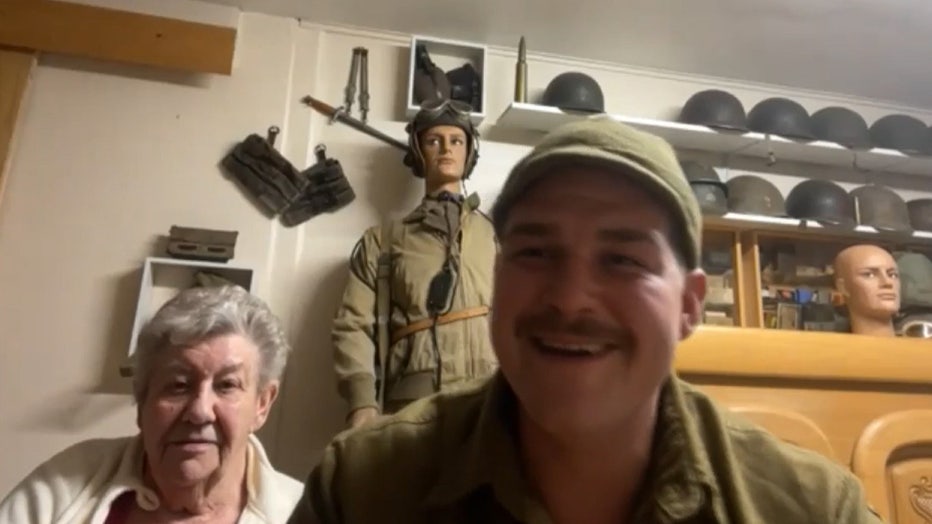 Sonny was always fascinated with stories his grandmother, Lucette Mortier, told of life under Nazi occupation.

"There would be a kilometer-long line for bread," Sonny explained. "And then you’d get to the end of the line and they’d say, ‘There’s no more bread, come back tomorrow.’"

And recounted the day the Americans freed her town.

It was a sweet moment followed so closely by sadness. 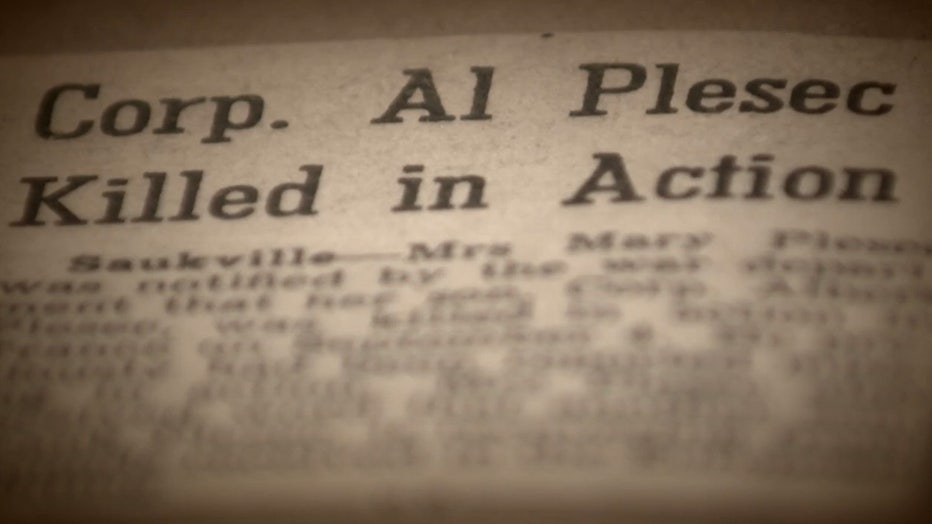 Moved by the story, Sonny decided to find the soldier. To search for the needle in this decades-old Belgian haystack.

"I consulted the archives of the city, but unfortunately I didn't find anything there," said Sonny. "So then I consulted the records of the gravediggers."

He deciphered handwritten ledgers from the 1940s, tracked down declassified files from the U.S. Army and finally found his man – Cpl. Albert Plesec of Saukville, Wisconsin. 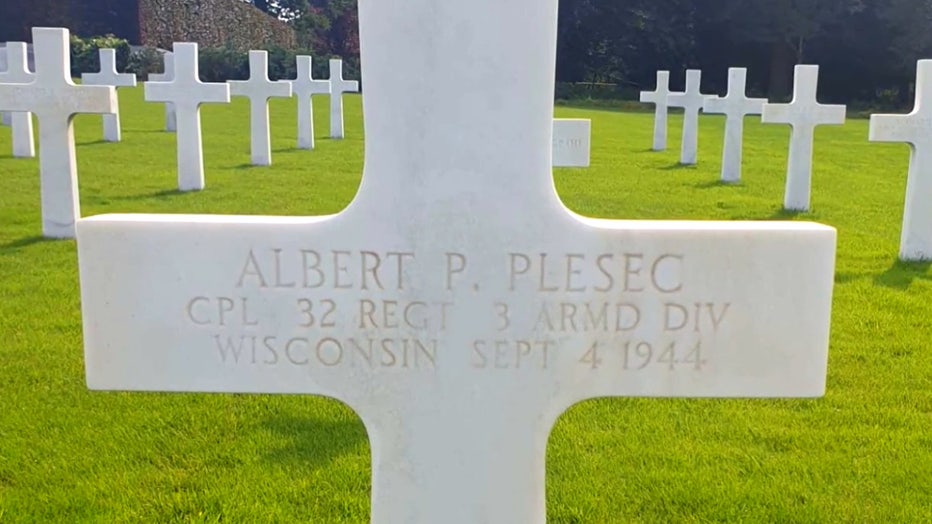 "I became impassioned by this and it became a real duty to me," Sonny said. "Because in our town nobody knew who he was. Nobody had noted his name."

On his 29th birthday in 1944, Cpl. Plesec shared that treat with Lucette. He died in an accident the next day, while cleaning the gun on his tank.

"And so I could bring my grandmother to the grave of the one who -- 77 years before -- had given her this famous piece of chocolate," said Sonny.

Cpl. Plesec did not have any children. Neither did his brother nor sister. A family tree with no living branches. His widow, though. That’s where the plot thickens.

"You get to feeling like Sherlock Holmes, ‘I’m going to solve this,’" said Anne Kertscher, President of the Saukville Historical Society. "And the more you dig, the more fun it gets."

When Sonny reached out on Facebook – as Sherlock would say -- the game was afoot.

"I’m looking for someone with Plesec," Anne remembered. "And then I said to my husband, I said, ‘That name sounds so familiar.’ He says, ‘Yeah, that was Roy and Vera’s Tavern.’"

Of course in Wisconsin, the clue would be a bar. The name and owners changed over the years. But back in the day, Roy and Vera’s was the spot in Saukville.

"It was the place to be," Fritz remembered. "It was very popular." 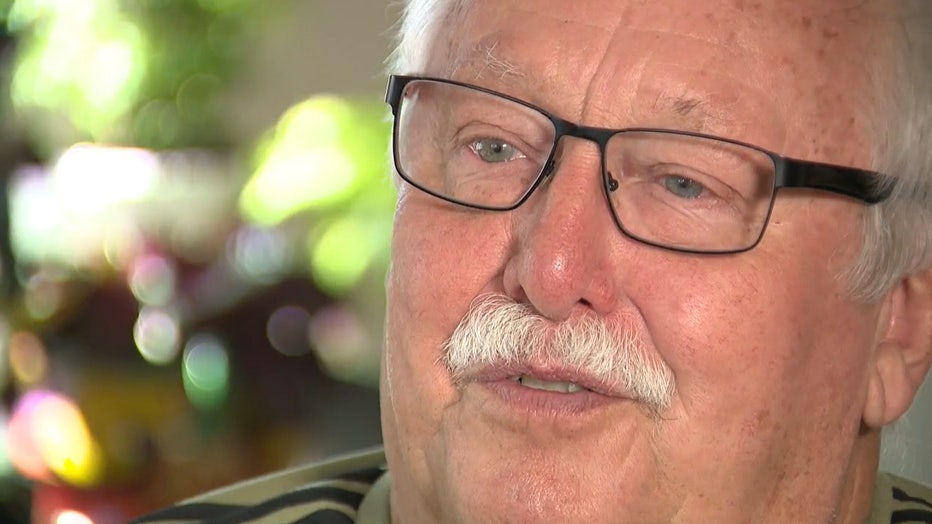 Fritz would know. He practically grew up there.

"Our friendship with Vera and Roy, they were like second parents to us," Fritz said. "A lot of people couldn’t quite understand the connection."

Vera and Roy were there the day Fritz’s parents got married. And before that, Fritz’s mother – Joyce – actually lived above the bar during the war. But why? Vera was Al Plesec’s sister. And Joyce, Al’s widow.

Not that Fritz knew any of that as a child.

"As kids, my mother never spoke of it," Fritz said.

Joyce remarried after the war and raised three boys in Saukville.

"I think she was kind of sparing my dad that, ya know?" said Fritz, who never got to ask his mother about her first husband.

But quietly, Al was always there.

"She was a saver," he said of the personal effects he’s discovered over the years. "That generation, they saved everything."

A dog tag in a box. A hat in a drawer. Letters in flowing cursive to "Dearest Joyce…"

"She lost her first husband, and then she sends off her first son to war again," Fritz said, referencing his own service in Vietnam. "It had to affect her. It had to have been hard on her."

All of those memories and emotions tucked away – buried in Saukville until a man in Belgium started digging.

There’s a reverence in Europe – to this day -- for those who liberated the continent. 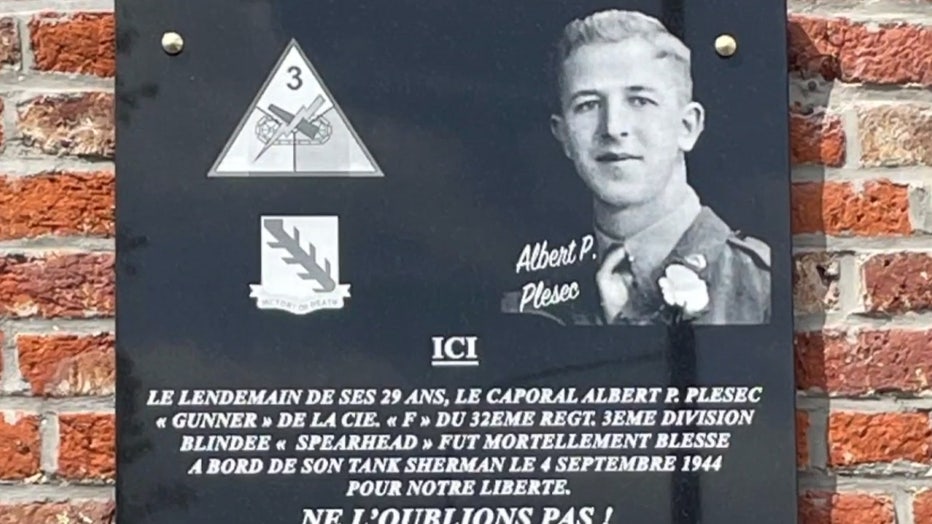 "The lucky ones made the sacrifice of their youth," Sonny stated. "The less lucky ones, of their lives."

It’s why there’s now a plaque in Belgium memorializing Cpl. Albert Plesec of Saukville. Dedicated almost 80 years after his death thanks to Sonny, a man he never knew.

"It’s not only for Al Plesec, but for all the veterans," said Fritz. "All the fellas that lost their lives over there."