BERLIN — The Rev. Georg Ratzinger, the older brother of Emeritus Pope Benedict XVI, who earned renown in his own right as a director of an acclaimed German boys’ choir, has died at 96.

The Regensburg diocese in Bavaria, where Ratzinger lived, said that he died on Wednesday. His death came just over a week after Benedict made a four-day visit to Regensburg to be with his ailing brother. 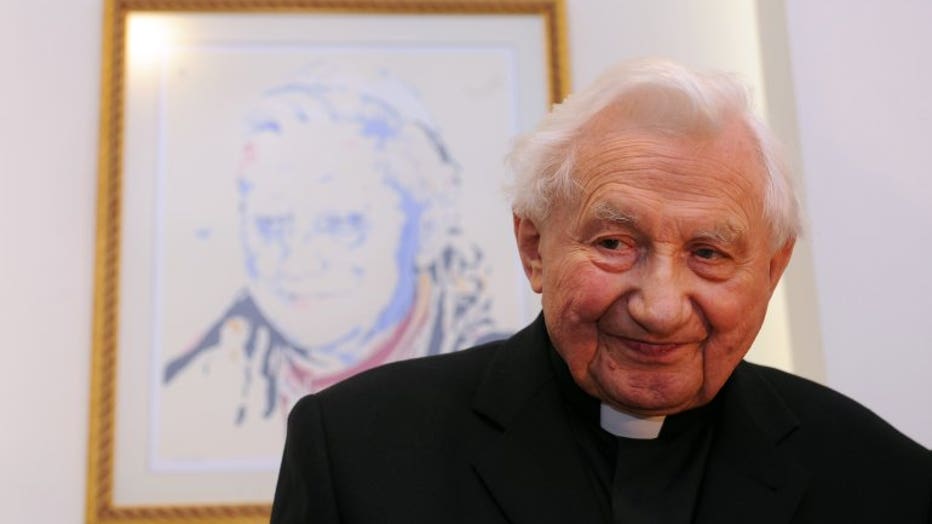 Georg Ratzinger, brother of Pope Benedict XVI, poses for a photo during the presentation of his new book "My brother the Pope" ahead a presentation in Regensburg, southern Germany, on September 13, 2011. (Photo credit should read CHRISTOF STACHE/AFP

Ordained on the same day as his brother, Ratzinger proved to be a talented musician and went on oversee the recording of numerous masterpieces and concert tours around the world by the Regensburger Domspatzen, a storied choir that traces its history back to the 10th century. But his reputation was tarnished as he apologized for using corporal punishment to discipline boys amid a wider investigation into sexual and physical abuse in the Church.

He remained extremely close to his brother throughout his career, expressing dismay when Joseph Ratzinger was elected pope that the stress would affect his health and that they would no longer spend so much time together.

The pope had his quarters in the Apostolic Palace modified with a special apartment for his brother, who traveled frequently from his home in the Bavarian city of Regensburg to Rome. Elected to the papacy in 2005, Benedict stepped down in 2013 and was succeeded by current Pope Francis.

The two came from a religious Catholic family, the sons of police officer Josef and Maria Ratzinger, and great nephews of the German politician Georg Ratzinger, a priest and social reformer who was a member of the Bavarian and Federal parliament.

Born Jan. 15, 1924 in the Bavarian town of Altoetting, Georg Ratzinger showed an early talent for music, playing the church organ at age 11. The family eventually settled outside nearby Traunstein in 1937, where he and his brother joined the seminary. During World War II, Ratzinger told The Associated Press in an interview that he remembered huddling with the blinds drawn with his younger brother and father listening to Allied radio broadcasts, because their father wanted them to know the truth about the Nazi regime.

Though the Ratzinger family was anti-Nazi, Georg Ratzinger was enrolled into the Hitler Youth in 1941. In his book, “Salt of the Earth,” Benedict remarked on the time and his own subsequent enrollment at age 14. Official details of the boys' Hitler Youth days no longer exist, as all of the organization’s archives for the area were burned ahead of the American advance at the end of the war.

In 1942, Ratzinger was drafted into a federal labor force, and the same fall entered the regular German armed forces as a radio operator in a signals unit. After serving in France, the Netherlands and Czechoslovakia, Ratzinger was sent in 1944 to Italy where he was wounded in fighting.

He was captured by U.S. forces and spent the rest of the war as a POW, returning to Traunstein in July 1945 — a day the then-Joseph Ratzinger recalled in his memoir “Milestones,” remembering that the family had no idea if Georg were alive or dead.

“A quiet worry hung over our house...” he wrote. “Suddenly, on a hot July day, we steps were audible and he whom we had missed for so long was again standing in our midst, tanned from the Italian sun. Then he sat down at the piano, thankful and relieved, and intoned ‘Holy God We Praise Thy Name.’”

Following the war, the brothers entered the seminary of the archdiocese of Munich and Freising to study for the priesthood. They were ordained together on June 29, 1951, in the Cathedral at Freising on the Feast of Saints Peter and Paul.

After working his way up as priest in the region, Georg Ratzinger was appointed musical director of St. Peters Cathedral in Regensburg in 1964, becoming the conductor of the famed cathedral choir, the Regensburger Domspatzen.

As head of this world-renowned choir, whose name means “Cathedral Sparrows,” Ratzinger helped build its reputation around the world, running tours that included trips to the Vatican, the United States, Canada, Poland and Japan and performances for Queen Elizabeth II and Pope John Paul II.

But well after his retirement from the post, revelations of sexual and physical abuse at the choir haunted him.

In 2010, Ratzinger apologized for using corporal punishment to discipline boys in the choir, saying he was aware of allegations of physical abuse at an elementary school linked to the choir but did nothing about it.

“At the beginning I also repeatedly administered a slap in the face, but always had a bad conscience about it,” Ratzinger told the Passauer Neue Presse, adding that he was happy when corporal punishment was made illegal in 1980. “Of course, today one condemns such actions; I do as well. At the same time, I ask the victims for pardon.”

He claimed he was completely unaware of allegations of sexual abuse, which he said dated from before his tenure as choir director.

“These things were never discussed,” Ratzinger said. “The problem of sexual abuse that has now come to light was never spoken of.”

His relationship with his brother always played a special role in his life.

Ratzinger once lamented in an interview that his brother’s role as pope would mean “family life might be a bit more limited” and acknowledged that he “had hoped that the cup would pass him by.”

Still, Georg traveled to the Vatican for his brother’s installation, and was given a prominent seat on the basilica esplanade.

While visiting the pope in August 2005, Ratzinger was hospitalized in Rome because of an irregular heartbeat and had a pacemaker implanted. Benedict visited him while he was in the hospital.

In October of that year, the brothers got together again. “Sanctus,“a piece Georg Ratzinger composed was played at a Vatican concert for the pope and sung by the Domspatzen, while both brothers watched on together.

As Ratzinger’s health failed, his brother came to Regensburg in mid-June to visit with him.

Benedict’s trip to Germany was his first trip outside Italy in over seven years. Benedict greeted old neighbors and prayed at his parents’ grave. He stayed at a seminary during his trip, visiting his brother twice a day.

Ratzinger’s only close living relative is Benedict. His sister Maria, died in 1991.

There was no immediate word on funeral arrangements.