MILWAUKEE -- A new report was released on Tuesday, April 12th by the "Wisconsin Council on Children & Families" analyzing the number of children killed by guns in Wisconsin from 1999-2014. The report shows a child has died from injuries inflicted by a firearm about once every two weeks in Wisconsin since 1999.

According to the data, firearms are the third leading cause of injury death for Wisconsin children, and they have killed more children in Wisconsin than drowning, fires and falls combined.

Nationally, the number of children killed by guns has plateaued after several years of decreases, indicating that the lack of recent progress towards reducing the number of child deaths is a problem in other states as well as in Wisconsin.

The number of children killed by guns from homicide and suicide is roughly equal, each making up just under half of the total number of child deaths in Wisconsin since 1999.

Accidental deaths from guns make up seven percent of the total.

The report indicates there is no clear answer as to why these differences exist, but it is important to note that high-poverty communities are much more likely to have high rates of crime and violence, and children in these neighborhoods are less likely to have high-quality schools and safe places for them to play.

Wisconsin children who are black are nearly five times as likely as their white non-Hispanic peers to be killed by guns.

In a national comparison, Wisconsin ranks near the middle of the states in overall child death rates from guns during this period —28th out of 50 states. 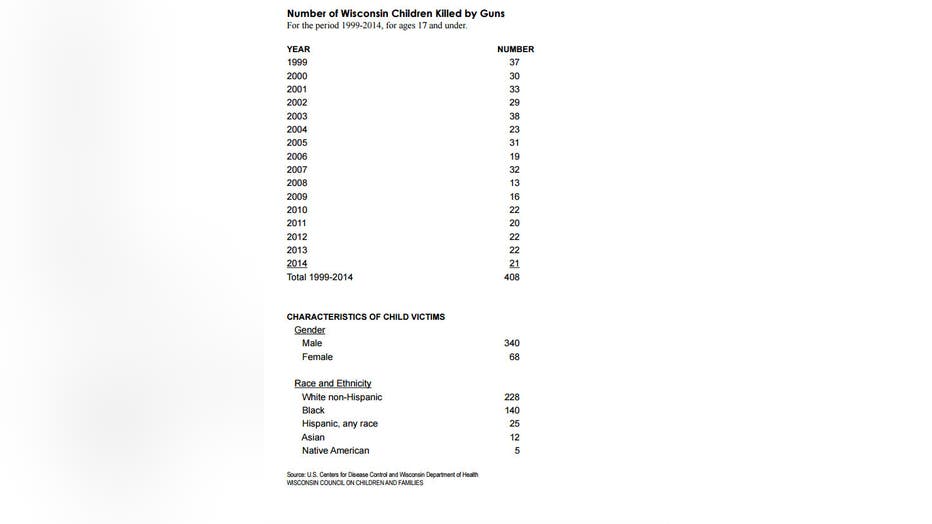