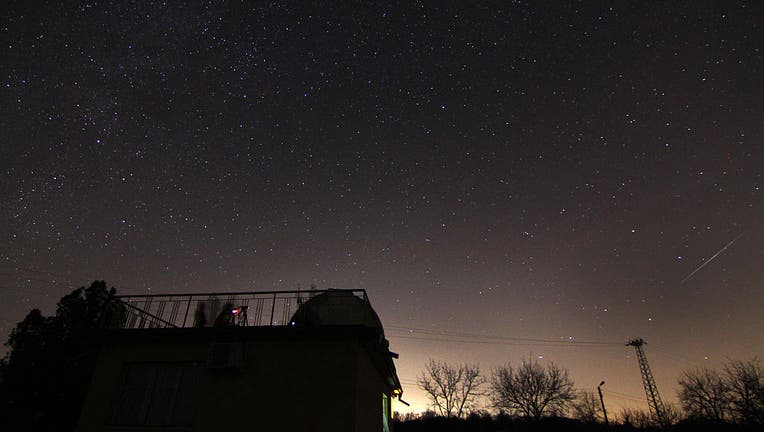 A file image shows astronomers observing the Geminids meteor shower in the observatory of Avren, East of the Bulgarian capital Sofia, on Dec. 14, 2015. (Photo by NurPhoto/NurPhoto via Getty Images)

Stargazers will be treated to a light show in the new year as "one of the best annual meteor showers" is set to peak Jan. 2-3, 2021, according to NASA.

The Quadrantids peak during early January each year, but have a much shorter length of maximum activity (6 hours) compared to other meteor showers with an average of two days, NASA says. The reason the Quadrantids peak is so short is because of the shower's thin stream of particles, coupled with the fact that Earth crosses the stream at a perpendicular angle, the agency explains on its website.

But during its peak, as many as 60 to 200 Quadrantid meteors can be seen per hour under the perfect conditions.

"Quadrantids are also known for their bright fireball meteors. Fireballs are larger explosions of light and color that can persist longer than an average meteor streak. This is due to the fact that fireballs originate from larger particles of material," the agency says.

What are the Quadrantids?

These objects, referred to as meteoroids when they’re in space, can come from comet particles or broken asteroids. When meteoroids enter Earth’s atmosphere at high speed and burn up, they’re called meteors or "shooting stars."

The Quadrantids originate from an asteroid, known as asteroid 2003 EH1, according to NASA. This meteor shower was first seen in 1825.

"An alternative name for the Quadrantids is the Bootids since the meteors appear to radiate from the modern constellation of Bootes," NASA explained. "Even though the constellation may no longer be recognized, it was considered a constellation long enough to give the meteor shower its name."

How to view the Quadrantid meteor shower in 2021

NASA says the Quadrantid meteor shower is best viewed in the Northern Hemisphere during the night and pre-dawn hours of Jan. 2 into Jan. 3. But a bright waning gibbous moon will light up the sky and may intrude on the show.

"To view the Quadrantids, find an area well away from city or street lights. Come prepared for winter weather with a sleeping bag, blanket or lawn chair. Lie flat on your back with your feet facing northeast and look up, taking in as much of the sky as possible," the agency writes.

"In less than 30 minutes in the dark, your eyes will adapt and you will begin to see meteors. Be patient—the show will last until dawn, so you have plenty of time to catch a glimpse," NASA adds.

Stargazers also recently enjoyed a holiday treat in December when Jupiter and Saturn crossed paths in the night sky — a phenomenon nicknamed the "Christmas star."