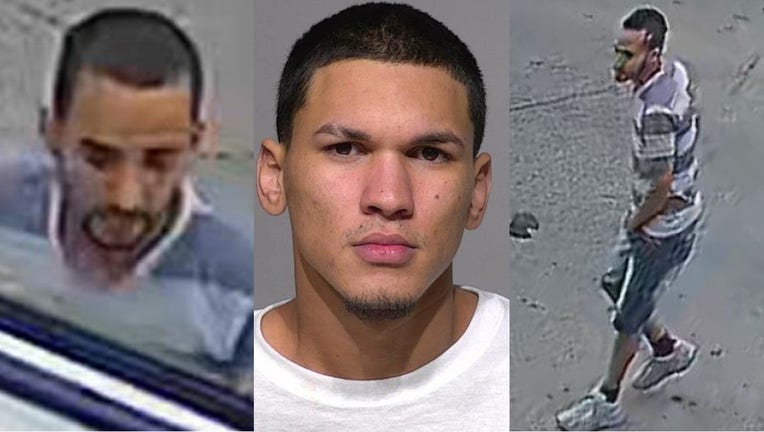 MILWAUKEE - A Milwaukee man faces a charge of first-degree intentional homicide after a fatal crash Saturday, Aug. 1 near 17th Street and Mitchell Street. Prosecutors say Bengi Pena-Gomez swerved his SUV directly into the path of a moped operator, killing him, and after the crash, the suspect's mother tearfully told investigators her son was "the real victim" after he "tracked down the man who shot him last year."

Prosecutors allege Pena-Gomez fled the scene on foot after the crash that happened just before 5:30 p.m. on that Saturday. A criminal complaint said the victim died as a result of blunt force injuries.

An investigation revealed the moped was headed eastbound on Mitchell, while the SUV prosecutors say Pena-Gomez was driving was headed westbound when the SUV swerved directly into the wrong lane of traffic in a crash captured by surveillance cameras. The victim was ejected from his moped, and both vehicles ended up on the sidewalk.

As witnesses attended to the victim -- loading him up in a vehicle to take him to the hospital, prosecutors say cameras captured Pena-Gomez briefly looking towards the victim before going in and out of the SUV -- eventually taking off on foot.

At the hospital, the victim provided a "deathbed statement," the complaint said, telling investigators the SUV veered into the wrong lane, and the last thing he remembered was being in the back of someone's car, headed to the hospital. He said he did not know of anyone who would want to do him harm.

The complaint said an investigation revealed the SUV was registered to Pena-Gomez, and "meticulous examination of the video footage" revealed he was the driver during the crash.

Additionally, prosecutors said Pena-Gomez' own mother approached officers crying and said her son was "the real victim." She said her son called her shortly after the crash and said he "tracked down the man who shot him last year," following him "through Puerto Rican Fest." She said her son told her he "found him, and intentionally crashed into him head-on." He said he "was going to shoot the injured man," but he wasn't able to do so due to the crowd of bystanders gathered around him.

According to the complaint, clothing matching that worn by the driver of the SUV in the surveillance video was found at the home where Pena-Gomez lives. His girlfriend told investigators the family "death threats" due to the crash he caused.

Investigators said a rifle was found in the SUV on top of a child's stroller, with a 100-round drum magazine inserted in the magazine well, and the safety selector switch set to fire.