COLUMBIA COUNTY -- A man prosecutors say was driving a semi that crashed into a school bus carrying students from Milwaukee to Wisconsin Dells is facing criminal charges -- arrested for OWI after the crash. Prosecutors say an investigation determined Murphy likely took too much anti-anxiety medication, which impacted his driving and led to the crash. 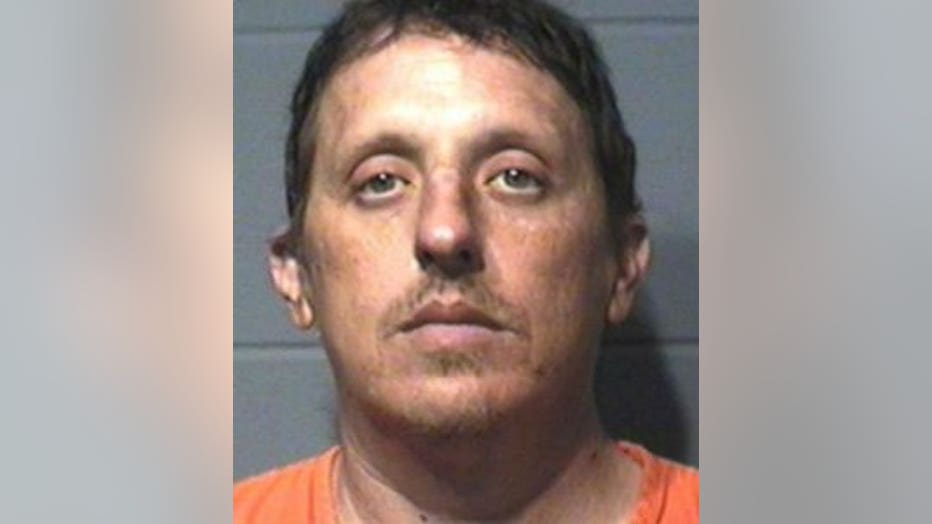 Twenty people were hurt in the crash -- many of them children from HOPE Christian School: Semper in Milwaukee. Four were seriously hurt. Two had to be taken to the hospital by helicopter.

According to a criminal complaint, just after 10 a.m. on May 23, State Patrol officials received a "check welfare" request from a representative from Dahl Trucking. An employee called to report that the company had been getting complaints about one of their trucks -- driven by Wayne Murphy.

A trooper was making a traffic stop around 10: 15 a.m. when he heard a report of a crash between a semi and school bus on I-39 northbound at Mile Marker 123 in the Town of Arlington in Columbia County.

When that trooper arrived on scene, the complaint says there were several emergency vehicles present, and children were seen sitting and laying on the ground near the bus. The semi was parked on the right shoulder in front of the bus, and was consistent with the description provided earlier through the welfare check request.

It was learned that the bus was headed northbound on I-39/90/94 when it experienced engine issues and pulled over to the right shoulder at the scene of the crash. There, it was struck by the semi allegedly driven by Murphy. The complaint says there were 33 people on board -- the majority of them middle school students on their way to Wisconsin Dells from Milwaukee. Many were injured as a result of the crash.

Investigators made contact with Murphy, and noted damage to the left side of the tractor portion of his semi, and heavy damage to the right side of the trailer. When asked what happened, Murphy "said he was traveling in the right lane when he saw the school bus stopped on the shoulder about a quarter-mile ahead of him." He said "his truck veered off the road to the right shoulder," but he was unable to explain why. He said he "tried to swerve to the left to avoid the school bus but the passenger side of his truck and trailer hit the bus." 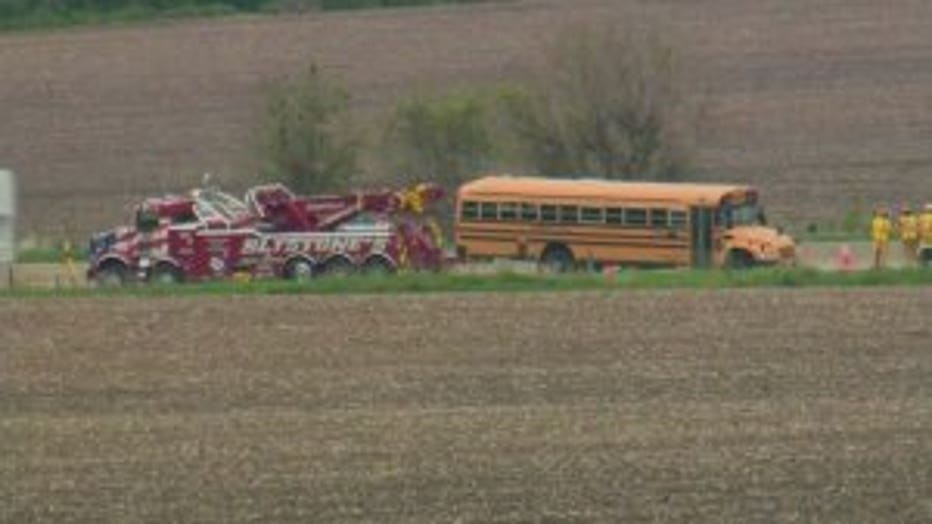 He said he was headed to Regina, Canada after leaving South Beloit, Illinois after getting 10 hours of sleep. He denied drinking.

The complaint notes that Murphy did not inquire about the condition of any of the students on the bus, and "generally seemed unconcerned with the situation." He noted that he had taken anti-anxiety medication that morning -- one-and-a-half pills. The bottle advised taking one pill per day, and the label indicated it could cause drowsiness, and advised using caution when operating a vehicle, but the complaint says Murphy denied the medication affected his driving. A bottle of Xanax was also found in the semi, and the complaint says it was last filled on May 14 with 120 pills. There were two empty Xanax bottles on the floor -- filled in February and April for 120 pills each. In the May bottle, 51 of 120 pills remained -- meaning Murphy had taken 69 pills in 8.5 days -- double the prescribed dose of four pills per day.

Field sobriety tests were administered, and Murphy was arrested for OWI -- taken to the hospital for a blood draw. 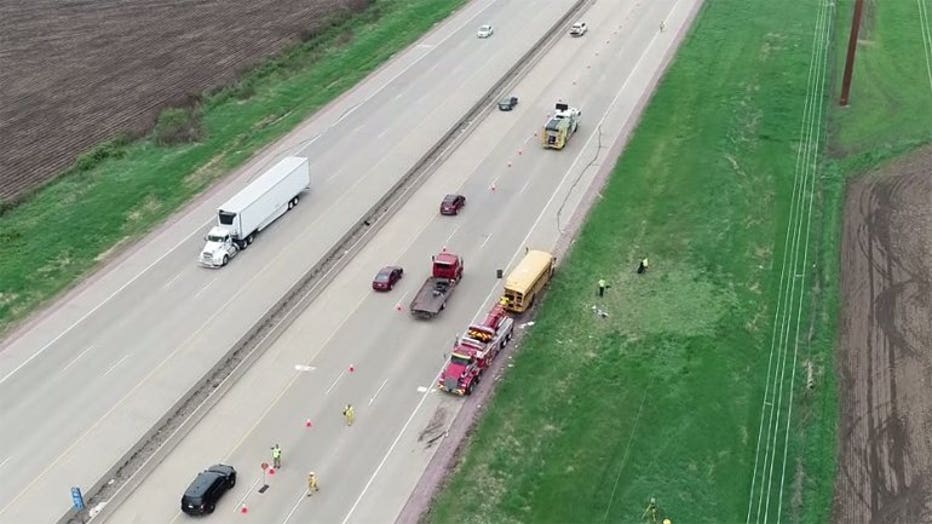 Twenty people were hurt in the crash -- many of them children. Four were seriously hurt. Two had to be taken to the hospital by helicopter.

The complaint details the injuries suffered by those who were seriously hurt.

A 13-year-old boy was unconscious in the hospital, being treated for a broken right ankle, broken toes, sore ribs and head pain.

A 14-year-old boy was unconscious after the crash and suffered pain in his neck, spine and left leg. He had to be hospitalized overnight after experiencing swelling on his spine. He was also diagnosed with a mild traumatic brain injury and left side weakness, and he suffered torn tissue in his neck. He was required to wear a neck brace, was scheduled to see a neurosurgeon and will require physical therapy.

A 16-year-old girl was unconscious and could not breathe on her own after the crash, so she had to be placed on a ventilator. She received a blood transfusion and was being treated for multiple injuries, including a broken shoulder. There was no timeline as to when she could be released from the hospital.

A 12-year-old boy was being treated for a fractured knee and sore back.

A 14-year-old boy was being treated for a concussion, broken collarbone and ligament injuries to his shoulder. 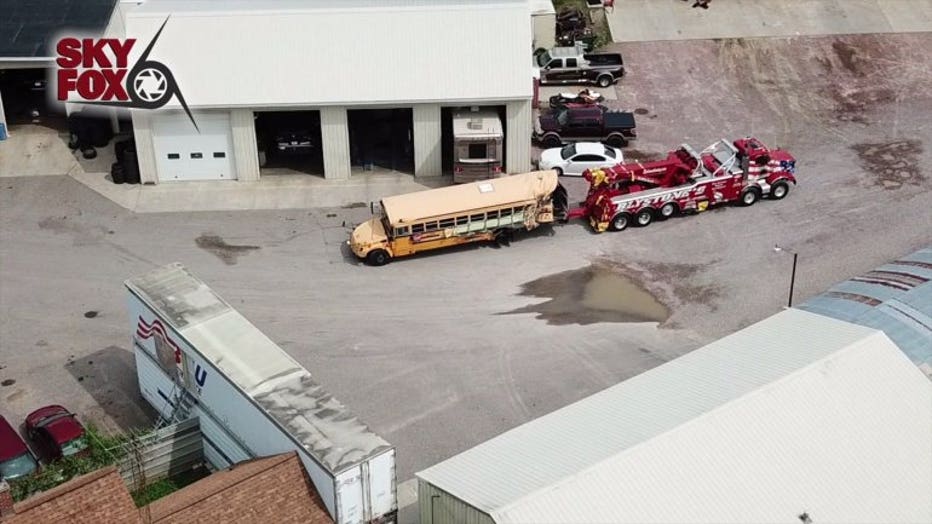 The complaint notes that investigators spoke with a truck driver who was following Murphy's truck on I-39/90 between Janesville and Madison and noted Murphy was "all over the road," which prompted this driver to call the 1-800 number listed on Murphy's trailer to report his unsafe driving.