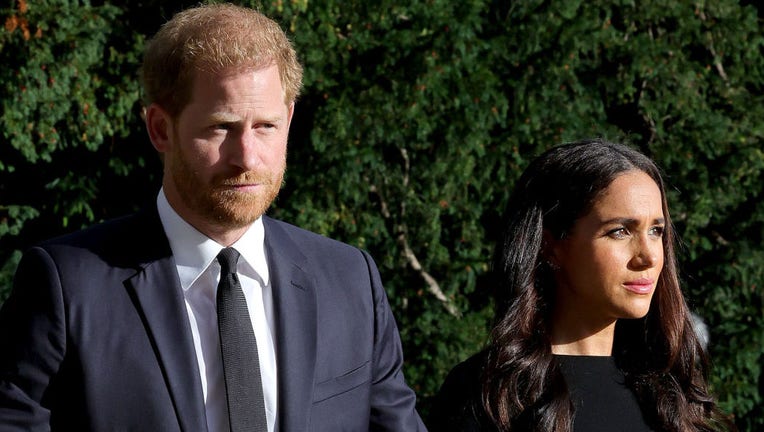 Prince Harry, Duke of Sussex, and Meghan, Duchess of Sussex on the long Walk at Windsor Castle arrive to view flowers and tributes to HM Queen Elizabeth on September 10, 2022 in Windsor, England. (Chris Jackson/Getty Images)

Meghan Markle and Prince Harry recently reunited with Prince William, Prince of Wales and Kate Middleton, Princess of Wales. The "fab four’s" reunion comes after the death of Queen Elizabeth II, who died at Balmoral Castle in Scotland at 96.

Although the brothers and their spouses have reunited, it is unclear how their relationship will unfold. Oprah Winfrey recently shared at the Toronto Film Festival that Queen Elizabeth II's death could be an "opportunity for peacemaking" among the royal family.

Harry and Markle have been outspoken in the past about their feelings toward the royal family. In March 2021, the couple sat down with Winfrey and Markle shared that she felt racism from the British media and members in the family.

She has taken to her podcast "Archetypes" in several episodes to discuss the struggles of marrying into the royal family and all it came with.

Here’s a look at some of the comments Markle and Harry have made about the royal family and beyond.

In March 2021, Harry and Markle held a bombshell sit-down interview with Oprah Winfrey where alarming allegations were made about the royal family being racist towards Markle and their firstborn son, Archie.

HARRY, IF YOU REALLY WANT TO HONOR YOUR DAD, NIX YOUR SALACIOUS TELL-ALL AND REIN IN YOUR ROYALS-THRASHING WIFE

Markle shared that there was a conversation with a member of the family and Harry around "how dark their baby was going to be."

"They didn’t want him to be a prince, or princess, depending on what the gender would be," Markle said of her son Archie before his birth. "He wasn’t going to receive security." 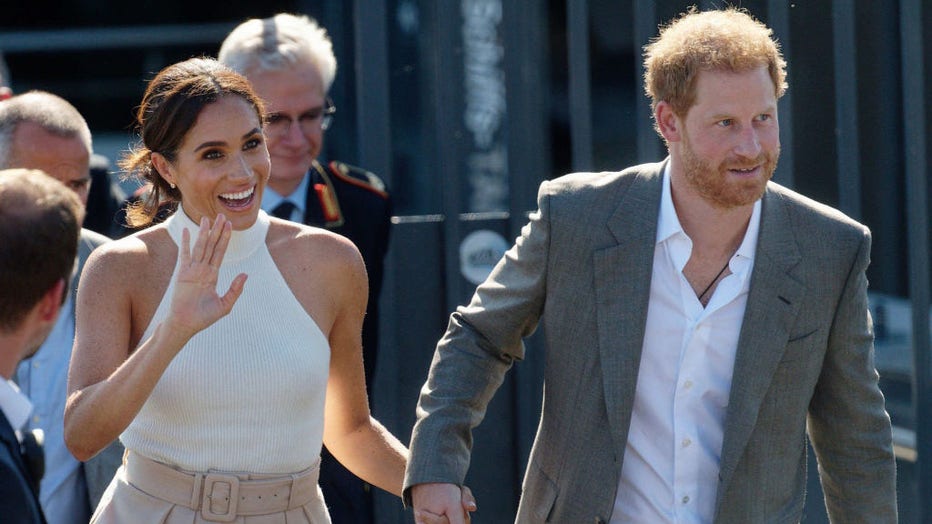 Britain's Prince Harry (r), Duke of Sussex, and his wife Meghan, Duchess of Sussex, walk to a car after taking a boat trip on the Rhine. (recrop) The prince and his wife are coming to Düsseldorf to promote the 2023 "Invictus Games." (Henning Kaiser/p

Harry kept certain things private in the interview and said that he was not going to share a question he was asked pertaining to his child or who asked him the question.

"That conversation I am never going to share," Harry said. "At the time it was a bit awkward, I was shocked."

Harry and Markle disclosed their reasoning on why they chose to leave their roles in the royal family. The Duke and Duchess of Sussex officially stepped back from their royal roles in 2020.

Winfrey spoke at the Toronto Film Festival recently and noted that Queen Elizabeth II’s death could be an "opportunity for peacemaking" among the royal family.

"Well, this is what I think, I think in all families – you know, my father passed recently, this summer, and when all families come together for a common ceremony, the ritual of, you know, burying your dead, there's an opportunity for peacemaking. And hopefully, there will be that," she told Extra while promoting her upcoming documentary about Sidney Poitier.

Prince Harry shares struggles with the media: ‘They are not going to stop’

In Apple TV+’s mental health docuseries, Prince Harry sat down with Oprah Winfrey and said he received "total silence and total neglect" from the royal family in response to Meghan Markle’s difficulty adjusting.

In the series, which aired in May, Harry shared that he turned to drugs and alcohol to cope with his mother, Princess Diana’s tragic passing and how he feared his wife’s life might end due to the same paparazzi and media frenzy.

During the five-episode series, Harry said he regrets not calling out racism in the media sooner and referred to his mother’s relationship at the time of her death. "History was repeating itself, my mother was chased to her death while she was in a relationship with someone that wasn’t White. And now look what’s happened. You want to talk about history repeating itself. They are not going to stop until she dies," Harry said.

Harry shared the advice he received from his father, King Charles III.

On Markle’s struggles with her mental health, Harry said, "I thought my family would help, but every single ask, request, warning, whatever it is, just got met with total silence, total neglect."

"We spent four years trying to make it work," he continued. "We did everything that we possibly could to stay there and carry on doing the role and doing the job. But Meghan was struggling." 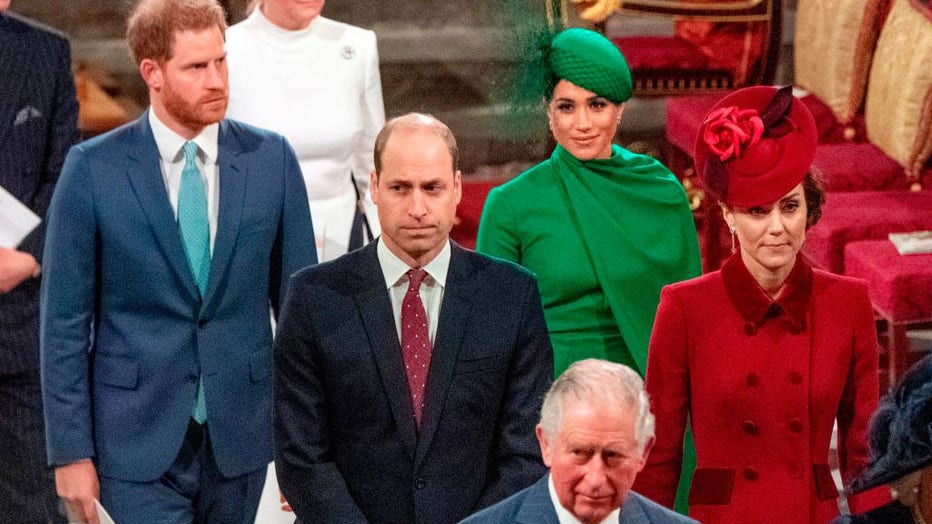 Markle was six months pregnant with their son Archie when she had suicidal thoughts just before the couple was set to appe"The thing that stopped her from seeing it through was how unfair it would be on me after everything that had happened to my mum, and now to be put in the position of losing another woman in my life with a baby inside of her, our baby," Harry said of her suicidal thoughts.

"I was ashamed that it had got this bad. I was ashamed to go to my family, because to be honest with you, like a lot of other people my age can probably relate to, I know that I’m not going to get from my family what I need," he added.

In the docuseries, Harry addressed the Winfrey interview and said the response they received caused Markle to cry herself to sleep. 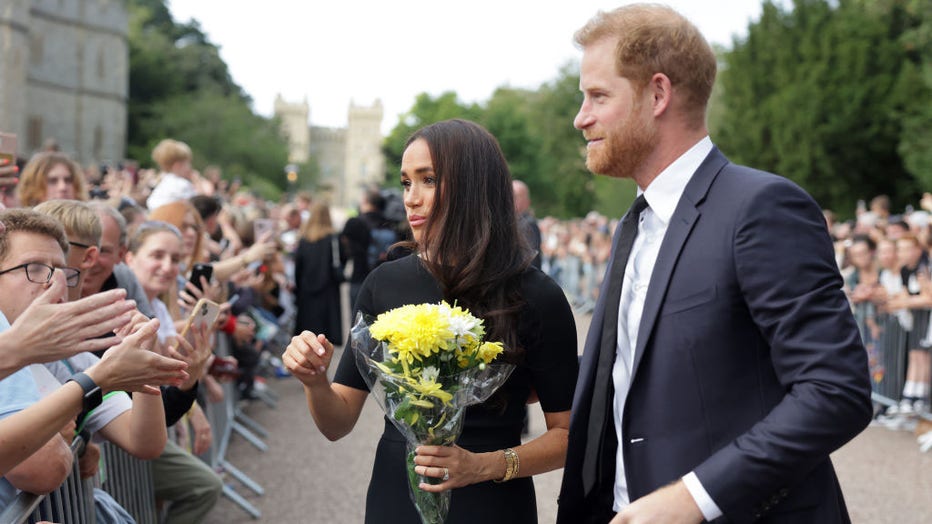 And addressing the racism allegation made by his wife, Harry said, "I like to think that we were able to speak truth in the most compassionate way possible, therefore leaving it open for reconciliation and healing."

"The interview was about being real, being authentic and hopefully sharing an experience that we know is incredibly relatable to a lot of people around the world despite our unique privileged position," he continued.

Prince Harry says ‘many of my family, they aren’t able to work and live together’

In an interview with Allison Davis from "The Cut," Markle shared that she and Harry were almost not able to afford their current home in Montecito, California.

"We were looking in this area and this house kept popping up online in searches," Meghan recalled. "We didn’t have jobs, so we just were not going to come and see this house."

Now, according to the outlet, due to Markle’s multimillion-dollar Spotify and Netflix deals, the couple had the means to purchase the $14.65 million home. She said the feeling upon entering their home was "calming" and she felt "free," which is why they had to make the purchase. 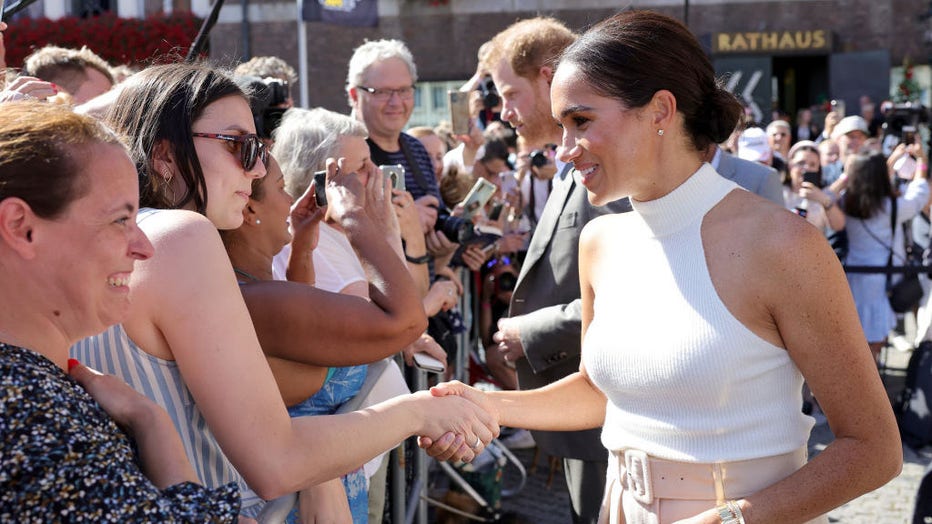 Prince Harry, Duke of Sussex and Meghan, Duchess of Sussex meet members of the public as they leave the town hall during the Invictus Games Dusseldorf 2023 - One Year To Go events, on September 06, 2022 in Dusseldorf, Germany. (Chris Jackson/Getty Im

Throughout the interview, there were subtle jabs at the royal family. Harry shared that he and his wife work on projects together, including their charity Archewell, which he said members of his family are not capable of.

"Most people that I know and many of my family, they aren’t able to work and live together," Harry said. Markle commented on the fallout with the family and said, "It was bittersweet, you know? Knowing none of it had to be this way."

On the topic of family, Markle touched on her relationship with her father, Thomas Markle, and the tabloid circus that strained their relationship in 2017.

"Harry said to me, 'I lost my dad in this process.' It doesn’t have to be the same for them as it was for me, but that’s his decision," she said. "I think forgiveness is really important. It takes a lot more energy to not forgive." 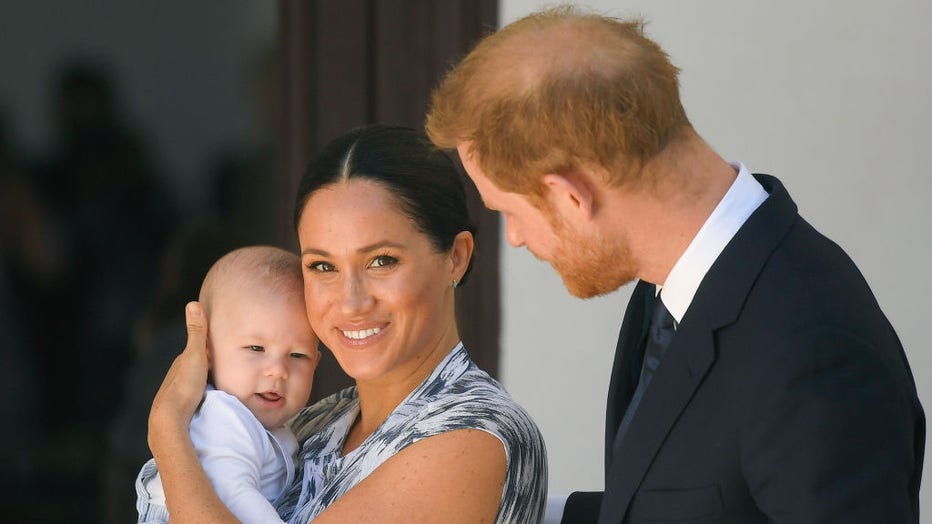 Prince Harry, Duke of Sussex, Meghan, Duchess of Sussex and their baby son Archie in South Africa in 2019. (Photo by Pool/Samir Hussein/WireImage/Getty Images)

Markle added: "But it takes a lot of effort to forgive. I’ve really made an active effort, especially knowing that I can say anything."

Markle brought Davis along with her to pick up Archie from school when they stopped to give a homeless man a backpack full of supplies on their way back home.

"At a stoplight, [Meghan] reaches into the trunk and produces a brand-new black backpack and hands it to her security detail to give to an unhoused man on the corner," Davis wrote. "They are teaching Archie that some people live in big houses, some in small, and that some are in between homes."

She added: "They made kits to pass out with water and peanut-butter crackers and granola bars." 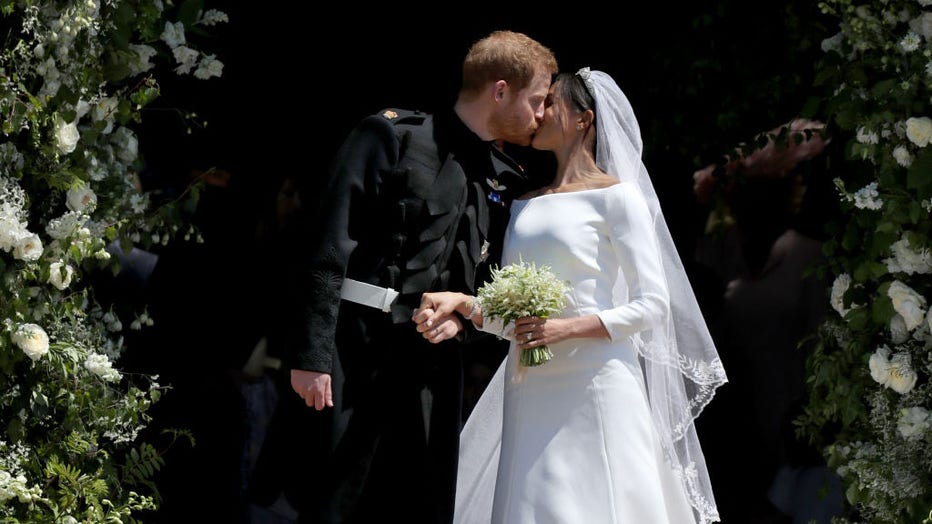 Markle shared that she’s chosen to not divulge too much during her interviews because she is "still healing." The Netflix deal that has been discussed is reportedly a docuseries about Harry and Markle’s life post-royal.

"For example, an At Home With Meghan and Harry–type docuseries that reportedly has an attached director, Liz Garbus, and footage shot by teams of cameramen, who have been spotted following the couple around — are met with half-answers shrouded in winks, codes, and redirection," Davis wrote, which Markle seemed to agree with.

Meghan Markle on her struggles of being interracial

Meghan Markle welcomed Grammy-winning singer, Mariah Carey, on an episode of her podcast "Archetypes" in August.

During their conversation, Markle – who has a Black mother and a White father – and Carey shared a commonality on struggling with being interracial. The Duchess of Sussex shared that she was never identified as a "Black woman" until she began dating Prince Harry.

"If there’s any time in my life that it’s been more focused on my race, it’s only once I started dating my husband," she said. "Then I started to understand what it was like to be treated like a Black woman. Because up until then, I had been treated like a mixed woman." 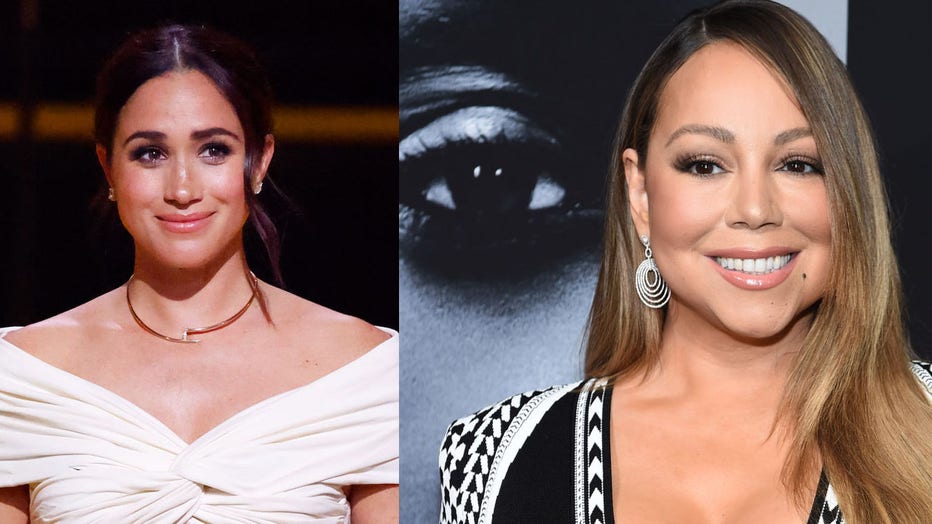 Markle shared how actress Halle Berry has been outspoken on how she’s been perceived as a mixed woman, but said their experiences differ due to their skin tones.

Meghan Markle hosted "The Office" star Mindy Kaling on an episode of her podcast "Archetypes" in September. During their conversation, Markle shared that she was constantly told how "lucky" she was that Prince Harry chose her to marry.

"When I started dating my husband, we became engaged and everyone was just like, 'Oh my god, you're so lucky! He chose you!'" she said. "And at a certain point, after you hear it a million times over, you're like, 'Well, I chose him too.'"

She continued: "But thankfully, I have a partner who was countering that narrative for me and going, 'They've got it all wrong. I'm the lucky one, 'cause you chose me.'"

Markle noted that those comments continued to have an effect on her.

Markle and Harry began dating in July 2016 and became engaged November 2017. They tied the knot at St. George's Chapel at Windsor Castle in a fairy-tale wedding in May 2018. They now share two children: Archie, 3 and Lilibet, 1.