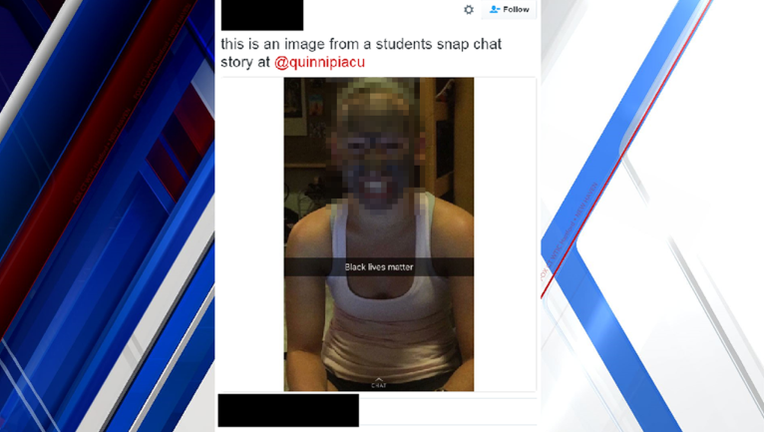 HAMDEN, Connecticut – A woman identified on social media as a Quinnipiac University student is facing significant backlash after a Snapchat of herself in blackface surfaced, but now, sources tell FOX61 she was a victim in all this.

A photo of a white female with black paint on her face and the caption “black lives matter” has been circulating since it was first sent out, and many are calling for her expulsion. However, sources tell FOX61 the girl in the photo was using a facial mask, and her friend took the photo and wrote the caption without her knowledge.

Commenters on Facebook have indicated they found the photo reprehensible, but said they want others to know that she is not representative of Quinnipiac University.

It’s unclear what the original source of the photo is since it has been reposted so many times on social media.

On Tuesday, September 20th, the university posted a statement on its Facebook page:

You may have seen a photo posted on social media this afternoon. We have released the following statement regarding this incident:

“The university takes this matter very seriously and acted swiftly to discipline those responsible for the offensive photo. This incident does not reflect the true nature of our university, where we have a long history of zero tolerance for any acts of racism, hatred or bigotry.”