OKLAHOMA CITY -- An Oklahoma angler may have smashed both a state and world record over the weekend.

An Edmond man snagged an enormous paddlefish Sunday while fishing at Keystone Lake in the Sooner State, the Oklahoma Department of Wildlife Conservation posted on its Facebook page. 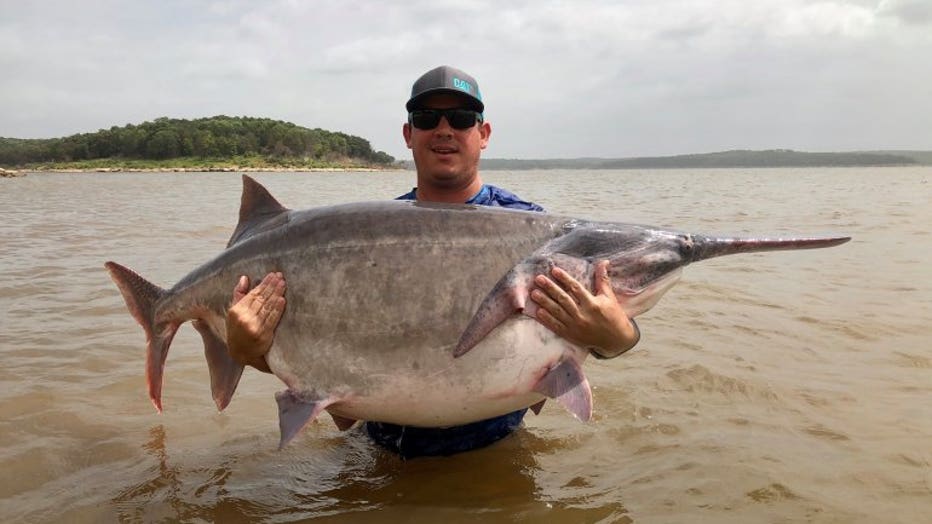 James Lukehart landed the possible world-breaking catch weighing 146 pounds, 11 ounces, and measuring 70.5 inches with a 45-inch girth, after quite a fight he told Tulsa World.

“It was exciting,” he said Sunday afternoon to the outlet. “It’s only been about four hours since we caught it. My wife filmed everything and I’m finally watching the video. My facial expressions, and I don’t think I said anything too improper, it was just total excitement.”

The paddlefish was certified as Oklahoma’s newest rod-and-reel-state record by Paddlefish Research Center and Northeast Region Fisheries staff, the state wildlife department wrote. Since paddlefish are not considered “sport fish,” and must be snagged, the International Game Fish Association does not keep records on the catches, Tula World reported. Instead, they are kept by biologists and state departments.

Once confirmed, the hefty fish will have beat the current world record by more than 2 pounds, and Oklahoma’s state record by 3 pounds, according to officials.

The fish was released “under the guidance of ODWC and monitored” for survival after its measurements were taken, the department shared. Only one paddlefish can be harvested a day and two per year, according to the state regulations as part of its ongoing conservation efforts for the prehistoric fish.