NEW YORK (CNN) -- A piece of one of the airliners that hit the World Trade Center towers on September 11, 2001, has been found behind the planned site of an Islamic community center near ground zero, the New York Police Department said Friday.

Part of a landing gear was discovered wedged between 51 Park Place -- the site of the controversial community center -- and another building just blocks from ground zero and "includes a clearly visible Boeing identification number," police said in a written statement.

The part was discovered Wednesday by surveyors, whom were hired by a property owner. They called 911 to report that they'd found "apparently damaged machinery," the police said.

"The NYPD is securing the location as it would a crime scene," the statement said.

Access to the area is being restricted until the medical examiner's office completes a health and safety inspection. 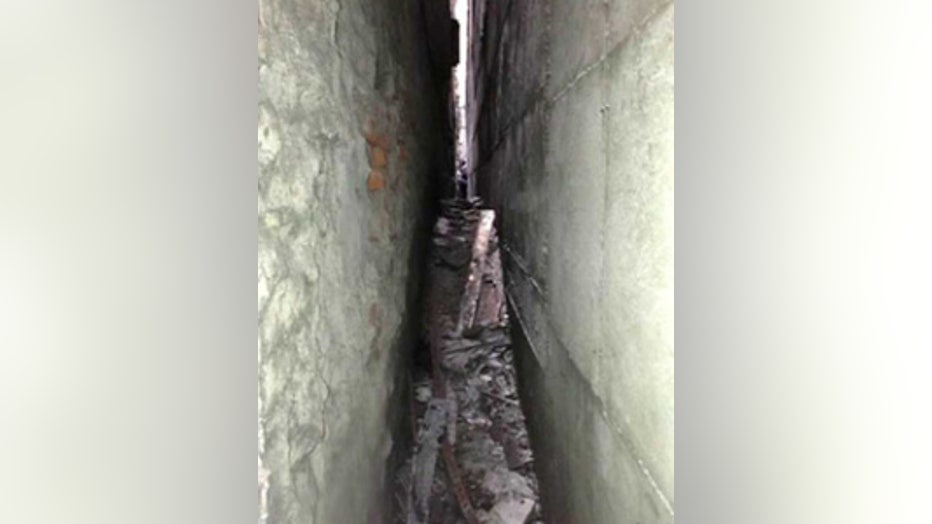 "We are cooperating fully with the appropriate authorities to make sure this piece of evidence is removed with care as quickly and effectively as possible," said Sharif El-Gamal, president of Soho Properties, the owner of 51 Park Place.

But the attorney for El-Gamal, Adam Leitman Bailey, questioned whether the piece of the landing gear was planted.

"It is impossible. It was absolutely planted and I'm happy to go on air saying so," he said, adding that thousands of people have protested in the area against the planned community center.

Asked why he thought someone would have planted it, he said: "Let me think, I got over 5,000 hate e-mails. I got sued personally twice. I have blogs against me. So any number of them could have done it."