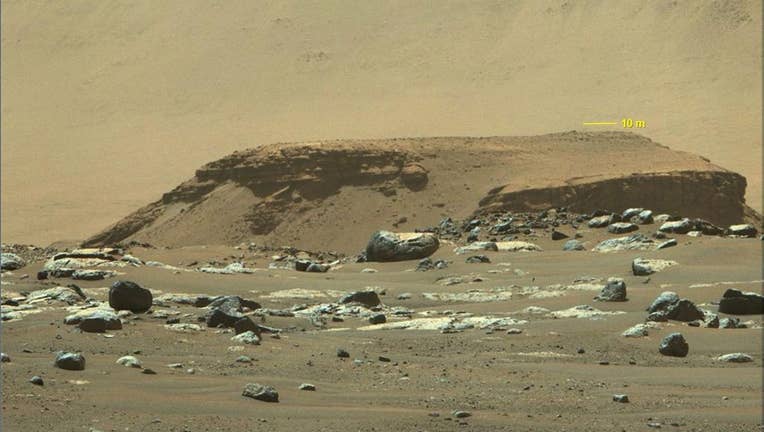 Engineers at NASA have received the first weather report from Mars' Jezero Crater, where the agency's Perseverance rover landed in February.

The rover's Mars Environmental Dynamics Analyzer (MEDA) system has sent back data on atmospheric conditions that will be used to inform future endeavors.

As measurements were received, the rover's team determined that the surface temperature on the red planet was just below minus 4 degrees Fahrenheit when MEDA's system began recording on Feb. 19, a day after landing.

That temperature plummeted to minus 14 degrees Fahrenheit within a half-hour, according to a Tuesday release.

In addition, the MEDA radiation and dust sensor showed that the crater was experiencing a clearer atmosphere than the Martian Gale Crater around 2,300 miles away.

They compared the reading using reports from the Rover Environmental Monitoring Station (REMS) aboard NASA's Curiosity rover, which landed inside the Gale Crater in November 2011.

The MEDA pressure sensors also noted that the pressure on Mar was within a predictable range of 718 Pascals.

While NASA has a relative understanding of the Mars climate, also receiving data from the InSight lander's Temperature and Win senors (TWINS), predicting dust storms and dust lifting will help aid future exploration.

Over the course of the next year, MEDA will provide NASA will readings of solar radiation intensity, cloud formations and winds, dust cycles, and heat fluxes and temperature cycles.

MEDA, which contains environmental sensors, wakes itself up every hour to record more -- independently of Perseverance's operations.

It is able to record the temperature at three atmospheric heights and also records the radiation budget near the surface.

"MEDA’s reports will provide a better picture of the environment near the surface. Data from MEDA and other instrument experiments will reveal more pieces of the puzzles on Mars and help prepare for human exploration. We hope that its data will help make our designs stronger and our missions safer," he added.

In the coming days, NASA will use MEDA to determine the best atmospheric flight conditions for the Ingenuity Mars Helicopter.

Ingenuity is scheduled to lift off no sooner than April 11 after surviving the first of its frigid Mars nights.