A mother is giving endless praises to the family dog for saving her diabetic 7-year-old from a potentially life-threatening incident in the middle of the night. 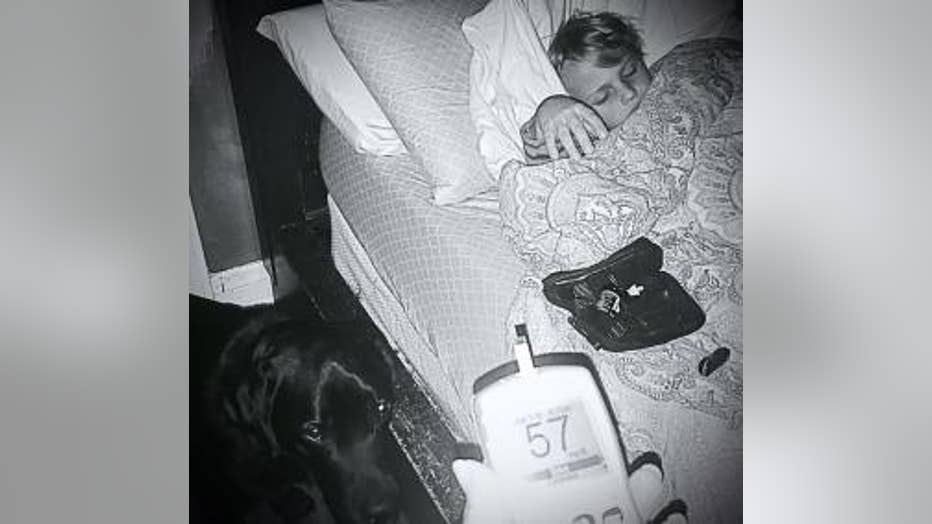 Luke, 7, sleeps next to Jedi, his overnight protector. (Facebook)

Luke Nuttall's mother Dorrie continuously checks his blood levels throughout the day, she said, but admits her son's condition leaves him vulnerable when the family is asleep.

Lucky for them, Jedi, a service dog with a fitting name, is trained to sniff out high and low levels of sugar in the young boy, who has Type 1 Diabetes. It's a rare form of diabetes in which the body does not produce insulin, and hosts an assortment of other symptoms including extreme thirst, sudden weight loss and extreme tiredness, according to American Diabetes Association.

On a Facebook post that has gone viral, Dorrie tells the story of how the stubborn pooch saved the boy by alerting her as everyone in the home was catching some shut eye.

Jedi jumped off the bed, then back on again, though I felt him do this I didn't wake up. Then Jedi laid on me. I woke up. He jumped off the bed and half on and would not budge when I told him to get back up. I got out of bed, he bowed, Luke's CGM said he was 100 steady. So I told Jedi we would watch and see, he bowed again (Bowing is his low alert), I told him to get up on the bed, he held his ground didn't budge, he refused. Then I knew he meant business and the sleepy fog started to wear off and I began to think clearer. I suddenly was fully awake and I knew there was an issue. I pricked his finger and got this, 57 is way too low, and by Jedi's behavior I guarantee he was dropping fast (he is still recovering from a stomach bug and anything under 70 is low).

According to post, the boy hasn't woke up on his own for the past four years and the his sugar level was dropping out of a "safe range" but Dorrie would've had no clue if it weren't for Jedi.

Luke was given a glucose tab to raise his sugar and was fine moments after, but for Dorrie, it's a daily battle that requires them to keep him safe overnight.

Still, she is upbeat and tackling her son's disease head on, along with the help of Jedi. She runs a Facebook page titled "Saving Luke – Luke and Jedi – Fighting Type 1 Diseases Together" dedicated to finding a cure.

"Amidst a disease that does everything in its power to make life so much harder, this is a picture of loyalty and love and perseverance," she wrote.  "A reminder that we will not let diabetes win, that we will never give up, and that we will always fight for our children."