The Milwaukee VA hosted a wreath-laying ceremony in Wood National Cemetery to honor seven local 9/11 veterans who lost their lives in Iraq and Afghanistan.

During the ceremony, wreaths were laid on the following graves:

"This is a remembrance of what happened on 9/11," said Daniel.

The Milwaukee VA commemorated 20 years since 9/11 with a wreath-laying ceremony Wednesday.

"To honor, especially, the seven fallen OEF/OIF veterans that are buried here at the Woods Cemetery," said Darcie Greuel.

Wreaths were laid on those veterans' graves who paid the ultimate sacrifice in Iraq and Afghanistan; the solemn ceremony holding a different meaning 20 years later.

"Two decades have gone by, and there’s a lot going on in the news right now with the events of pulling out of Afghanistan, so I think all of that together has evoked a lot of emotion and really caused us, as a team, to pause and really reflect," said Greuel. 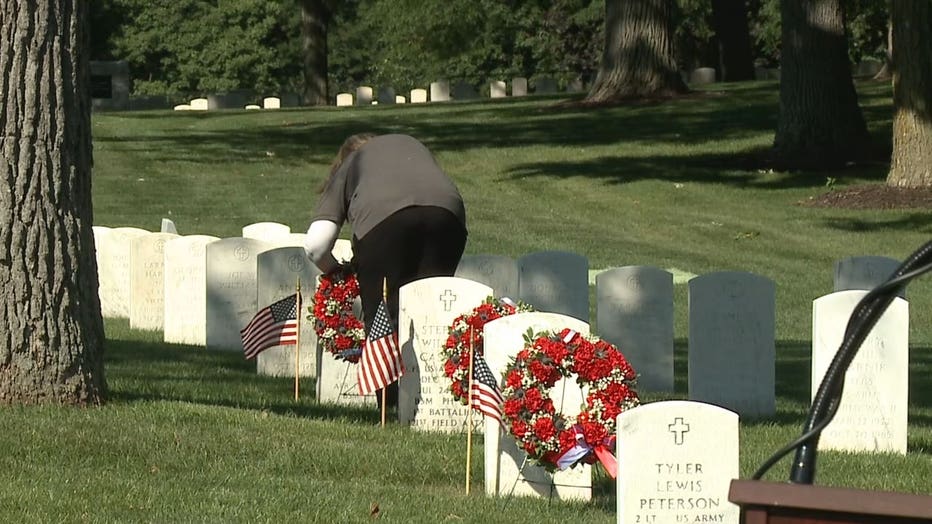 Greuel served in Afghanistan herself.

"I guess it’s bringing back a lot of memories -- good memories and bad memories – but overall, just feeling a real sense of pride," said Greuel.

Due to COVID-19, the ceremony wasn't open to the public but the message remained the same -- never forget.

"There are a lot of individuals who didn’t live through it so this is a remembrance so that we don’t forget all those lives lost and again all our veterans that have defended our country against these things from happening," said Daniel.

The ceremony closed with taps played by a bugler.

A 21-year-old Milwaukee man is accused in a double shooting on the city's south side – in which one woman died from her injuries.