MILWAUKEE - When thousands ran for safety on Sept. 11, 2001, first responders ran toward the World Trade Center to help.

On Deer District Plaza, 343 sets of bunker gear, boots and helmets – each topped with a photo of an FDNY firefighter killed on 9/11 – sat as a powerful look at all that was lost

"911. Three numbers which previously had no other meaning than a call for help and a sign of hope," said Greenfield Fire Chief Jon Cohn.

The Greater Milwaukee 9/11 Remembrance Committee put action behind words Saturday, reading the names of each firefighter killed – ensuring their sacrifice is never forgotten.

"Before a military response was even conceived of, this nation's firefighters, EMTs, paramedics and law enforcement officers were your front line of defense," said Milwaukee Fire Chief Aaron Lipski. 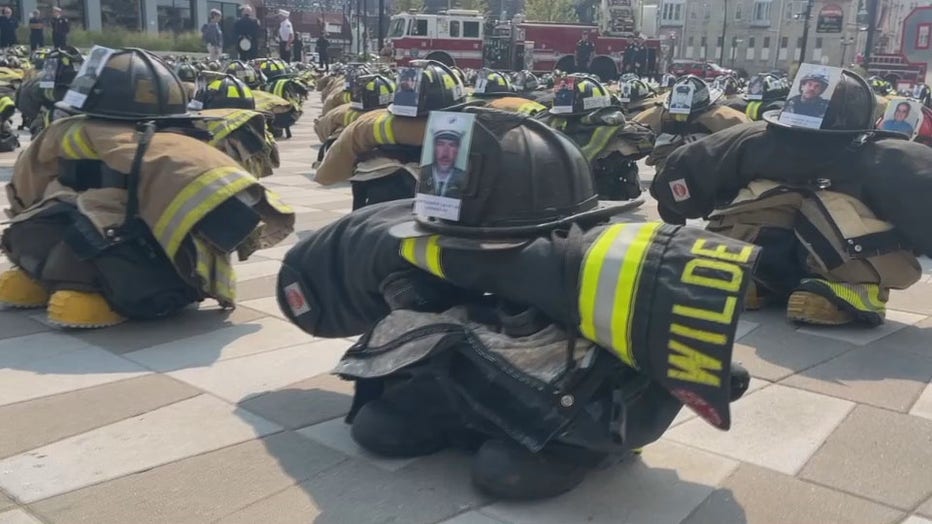 9/11 marked the single largest loss of firefighters in the U.S. Saturday's ceremony, complete with the "Striking of the Four Fives" – an FDNY tradition.

"We reflect on the fact that those people ran towards the danger when so many others were running away from the danger," Milwaukee Common Council President Cavalier Johnson said.

Saturday's event also included hundreds of candles lit in honor of firefighters who have died of 9/11-related illnesses.

The Greater Milwaukee 9/11 Remembrance Committee pays tribute to the firefighters who lost their lives in the attacks on 9/11.

For one hour Saturday afternoon, instead of live bands, Summerfest's Generac Power Stage became a place for military appreciation.