“Many people had given their life savings:” Investors spend millions for fake precious gems

"Many people had given their life savings:" Investors spend millions for fake precious gems

NEW YORK — The pitch was simple: You can make a fortune off of buying undervalued gems. Investors quickly found out they weren't getting what they paid for.

"We decided to buy one and see what happened," explained Millie Duke. 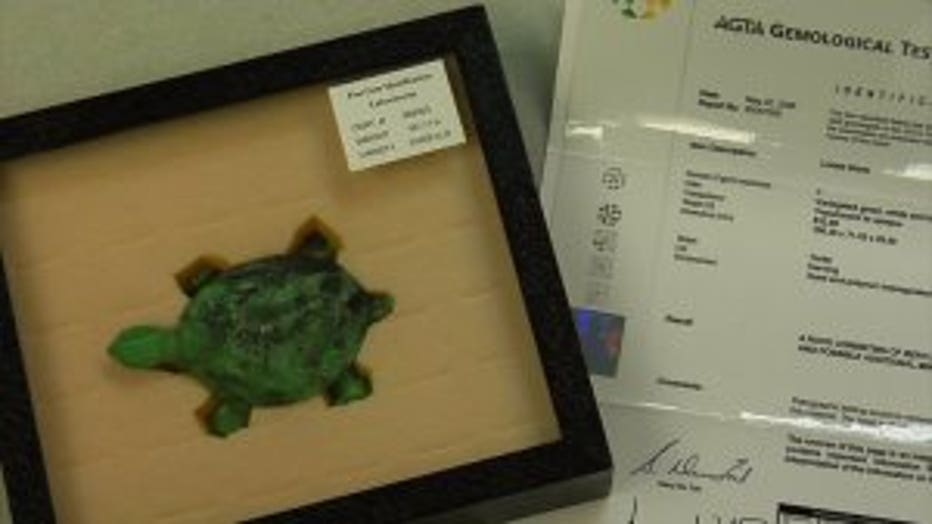 "Precious gem" purchased by Millie Duke. A New York laboratory found out it was worthless after tests.

Duke bought one gem after receiving a call about investing in precious stones.

"They were very high-pressure. She would call every week or two trying to get us to go higher and higher and trade one in for another that was much more expensive," Duke said.

Duke and her husband thought it was risk-proof because the company told investors they could sell the stone back to them for almost triple the original amount.

"So people were led to believe that not only were they buying something that was undervalued to begin with, but that it was going to appreciate, you know, very quickly," explained U.S. Postal Inspector Rich Cinnamo.

"They were generally, you know, worthless — an item that was purportedly worth $5,800 at the time of the purchase was found to be  'worthless' and was considered by the laboratory in New York to be essentially a green rock," revealed Cinnamo.

Investors were warned not to break the seal on the packaging of the stones. If they did, they were told the buyback offer would be null and void.

"Victims were really afraid to open these containers and have these items checked for themselves for fear that they wouldn’t be able to sell them through the company at a later date," Cinnamo said.

Of course, without opening the box, the investors had no way to asses the value of the stones they had just purchased.

When Duke decided to cash out, she called the company, but no one answered.

"If they had taken us for that amount, they had more than likely taken others for probably more," Duke said.

In fact, more than 100 victims invested a total of $4 million. Duke went online and found several complaints on Scam Victims United. She also learned some of those victims lost a lot of money.

"Many people had given their life savings," Cinnamo said.

"Once someone tells you that you can’t really examine something that you’re buying, you have to run the other way. That’s a fraud!"

If you plan on investing in an expensive item like a gem, don't purchase it over the phone or online without being able to look at it first.

"Once someone tells you that you can’t really examine something that you’re buying, you have to run the other way. That’s a fraud," Cinnamo said.

This story has a happy ending of sorts. A suspect was taken into custody. He paid restitution and victims got most of their money back.