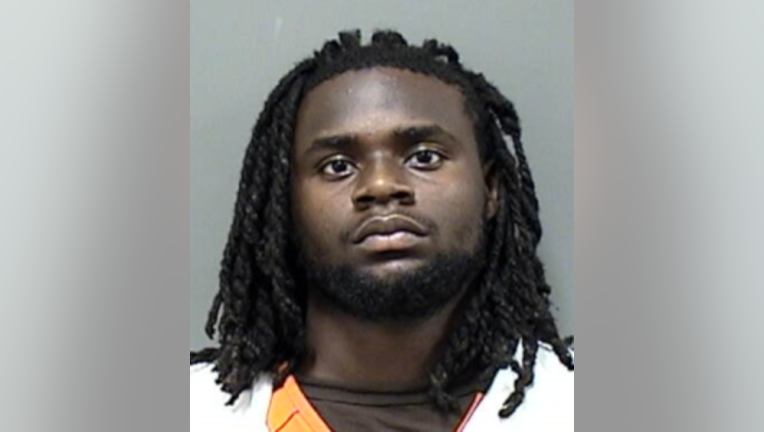 RACINE --  Montavius Drane, 24, of Racine is facing charges in connection to a burglary that happened Monday, June 1 at Plaza Jewelers on Durand Avenue in Racine. Officials say this was the same night as the civil unrest in Racine -- noting that they saw a spike in commercial burglaries and the Thelma Orr Community-Oriented Policing (COP) House, a landmark in Racine, was damaged by fire.

Drane is facing the following charges:

According to the criminal complaint, an investigator reviewed a current photo of Drane and compared that photograph to the surveillance footage recovered from the burglary. The complaint indicates the officer recognized a person with "similar size and dreadlocks" as Drane inside the jewelry store during the burglary.

The complaint says "the person who was recognized as Drane in the surveillance footage is visible smashing a glass display case and removing contents." It is also visible that the suspect was "not wearing any gloves on his hands."

Officials identified the fingerprints recovered from the scene as belonging to Drane.

According to the complaint, the owner of Plaza Jewelers told investigators that the approximate value of the damage to the store on the night of the burglary was $2,500. The damage included the window and door that were shattered and the display cases that were broken, allowing the suspects to take merchandise held for resale. The total loss of inventory was approximately $7,500. The store was closed for two days -- which the owner stated was a loss of approximately $2,000 in sales.

On July 6 officials were notified that Drane was already in custody due to a traffic stop from Mount Pleasant Police on July 4.

During an interview with investigators, Drane stated that he does not know where he was on the night and early morning of June 1. He told officials he has never been at Plaza Jewelry. Drane also refused to identify others that may have been involved in the burglary stating, "I'll take my time."

Drane made his initial appearance in court on Thursday, July 9. A statue conference has been set for Aug. 6.