MILWAUKEE (WITI) -- It's one of the most terrifying things you can imagine on the road.  Your car strikes the butt end of a guardrail at 65 miles per hour and a shaft of steel penetrates the exterior and goes straight through the cabin.  It's not supposed to happen anymore, but it does.

Now, a nasty court battle is raising serious concerns about the effectiveness of a common safety device at the end of most sections of guardrail.

You drive past them everyday, and probably never even notice those black and yellow striped rectangles at the front end of most roadside guardrails.  They are part of a special safety device called a 'guardrail end terminal.'

A federal whistle-blower says one particular model is failing at an alarming rate.  And he came all the way to Wisconsin to prove it.

"How many more people has got to die before something's done?," asks Joshua 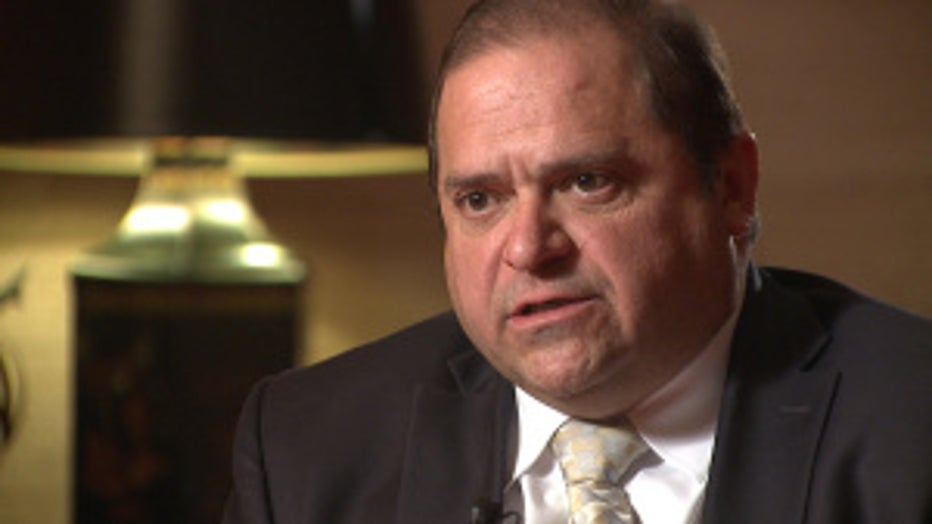 Harman, a guardrail engineer from Virginia.  He is the plaintiff in a federal "False Claims Act" lawsuit against Texas-based Trinity Industries, maker of a popular model of guardrail end terminals.

"You see them everywhere," says Steven Lawrence, an attorney representing Harman in the federal case.

The guardrail end terminals -- or 'heads' as they're called by engineers -- are designed to absorb the energy of a crash (see 1999 crash test video), safely slowing you down, while preventing the rail from spearing your car and impaling you.

"It takes the guardrail and pushes it out to the side of the vehicle," Lawrence explains, "and slows the vehicle to a controlled stop."

Harman and Lawrence say, in most cases, you can hit one of these devices at 60 miles per hour and walk away from the crash.  If, that is, you're hitting the right model.

"The original design was an ingenious product," says Harman.  "I have repaired them and seen people survive accidents they shouldn't have."

Actually, Harmin did more than just repair them. A few years ago he started making what Trinity calls a "copy" of its patented ET-Plus guardrail terminals.  Trinity sued Harman for patent infringement and Harman's companies stopped production. 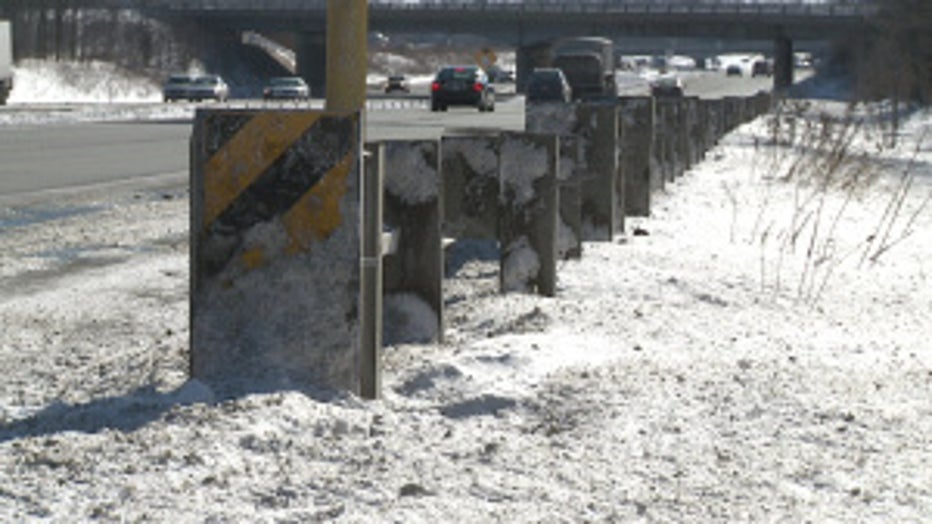 Guardrail end terminals are designed to absorb the energy of a crash while preventing the guardrail itself from impaling the vehicle.

"They're idle at this point," Harman says.

Now, Harman is a man on a mission to prove Trinity's own guardrail terminals are dangerous.  In 2012, he filed a lawsuit, accusing Trinity of making secret modifications to the ET-Plus that were never disclosed to the Federal Highway Administration.

"They took a product that was working just fine and, in order to make more money, they changed it," Lawrence says.

According to the lawsuit, sometime between 2002 and 2005, Trinity reduced the size of the ET Plus feeder channel from five inches wide to four.  More important, says Lawrence, is what they did to the inside of the terminal.

"They essentially shrunk it," Lawrence says.

To demonstrate why that matters,Harman took the Fox 6 Investigators for a ride on the Milwaukee freeway system.  On I-43 just south of Mequon Road, he shows us a competing guardrail head -- the SKT-350 -- that was recently involved in a low-speed crash.  SKT stands for "Sequential Kinking Terminal," which describes the manner in which the device absorbs a car's energy, by kinking the guardrail's W-beam as it is forced through a feeder chute.

"You can actually see right there they slid right into it," Harman says, as he points to a guardrail head that's pushed in about 8 feet, and cocked just slightly to the right.  "So the product worked perfectly.  Still facing traffic." 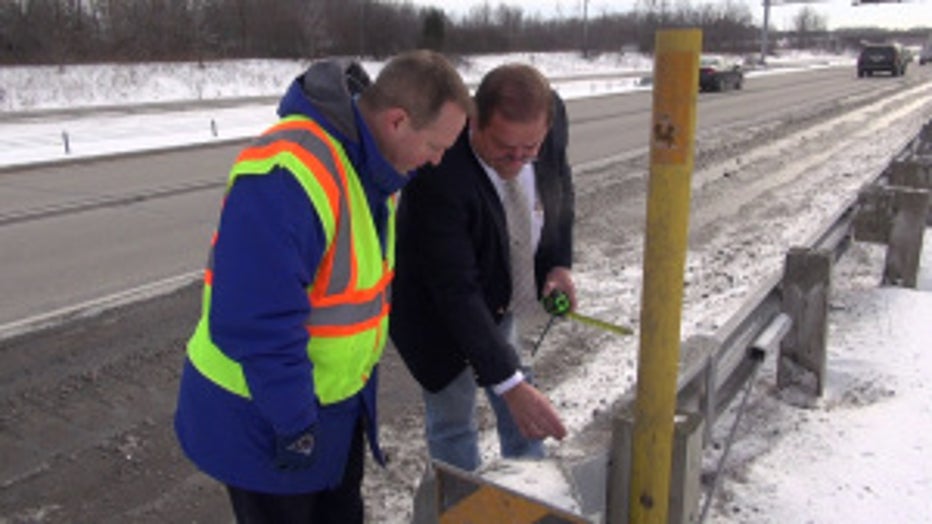 Just a few hundred feet down the interstate, he spots a 4-inch ET Plus.  It works by flattening the W-shaped guardrail like a pancake, then shooting it out the side.  But Harman says because of the shrunken internal dimensions of the feeder chute, the guardrail often gets stuck inside the ET-Plus guide chute.

"Right in here is where it chokes," Harman says, as he points to a narrow spot in the throat of the device.  The result?

"These terminals are failing at an alarming rate," Harman says.

From Texas to Maryland and Oklahoma to Tennessee, guardrails buckle and crumple and spear.  Drivers are seriously injured.  Sometimes killed.  And Harman claims each case is further proof that the smaller ET Plus is failing, in some cases impaling drivers with the very guardrails that were meant to protect them.

"The terminal locked up," Lawrence says.  "His car flipped around, and the guardrail went through his driver side door, essentially cutting him in two."

"He will never be the same," Lawrence said. 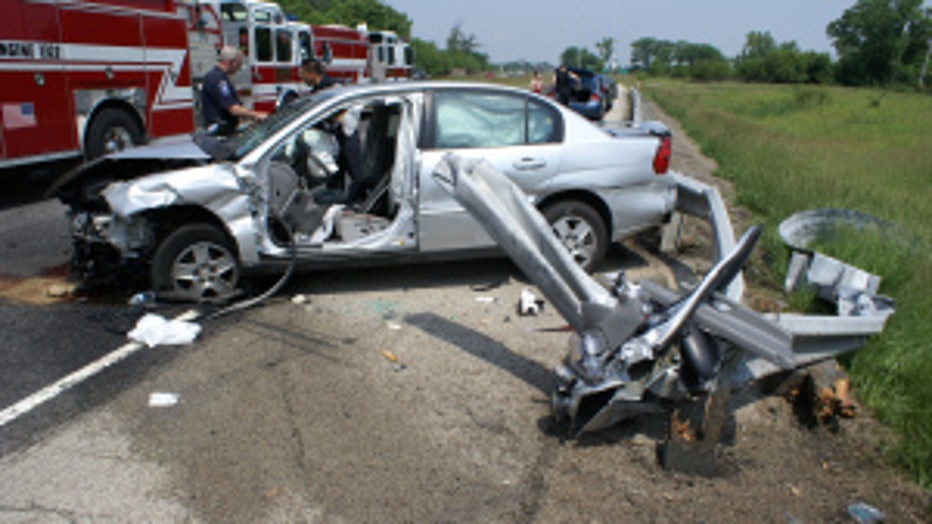 Firefighters in Gurnee, IL, extricate a 22-year-old man who was impaled by a guardrail on June 9, 2013.

Five months earlier, a woman in Kingsport, Tennessee hydroplaned in a rainstorm, striking a four- inch ET Plus.

"The energy from the car flipped her car in such a violent manner that it killed her," Lawrence says.

The driver was 42-year-old Elizabeth Elsevier, whose parents live in Germantown, Wisconsin. Her sister, who also lives in Wisconsin, tells FOX 6 News that the family fully supports the lawsuit that's been filed against Trinity on Elizabeth's behalf in Tennessee. However, they decided as a family not the discuss the matter in a television news story.

"It's horrific what's happening to these families," Harman says.

Trinity says it's impossible to tell from photos alone if a guardrail terminal failed.

The company emailed Fox 6 News a statement that says Trinity "has a high degree of confidence in the performance of the ET Plus system," which it says was successfully crash-tested in 2005 with the four inch channels.  Trinity points out that, even after reviewing Harman's claims, the Federal Highway Administration "re-affirmed" its acceptance of the ET Plus in 2012.