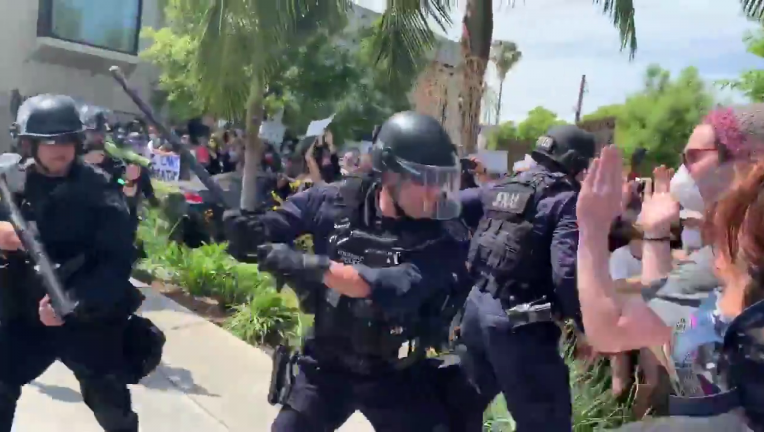 LOS ANGELES, Calif. (FOX 11) -- Disturbing videos that appear to show officers with the Los Angeles Police Department striking peaceful protesters with batons in the Fairfax District have surfaced on social media, as reports of police brutality are on the rise nationwide.

The incident was captured on Saturday afternoon as demonstrators called for justice over the in-custody death of George Floyd in Minneapolis.

One of the people who posted a video of the confrontation was actor Matt McGorry from the television series "How to Get Away With Murder."

"More police brutality from the @BLMLA @WeBldPwr protest yesterday where cops starting swinging batons and shooting projectiles at people simply standing there with there hands up," he said in a Tweet, referring to the organization's Black Lives Matter Los Angeles and BLD PWR.

It was unclear if any injuries were reported.

FOX 11 has reached out to the LAPD and Mayor Eric Garcetti's office for comment on the video and is waiting to hear back.

On Thursday, the LAPD asked protesters who believe they were victims of excessive force by officers to file a complaint with the department or its inspector general.

"Protests, marches and demonstrations over the last several days have been often dynamic and at times dangerous situations for both officers and demonstrators. A number of these gatherings have unfortunately devolved into chaos with rocks, bottles and other projectiles being launched at police officers, who have sustained injuries that range from cuts and bruises to a fractured skull," according to a department statement posted to Twitter.

The department acknowledged viral videos showing protesters struck by officers with batons or shot with rubber bullets. Mayor Eric Garcetti has since said the department will cut back the use of foam projectiles.

According to the LAPD statement, "We are aware of individuals who have posted videos online and on social media depicting encounters with the police, that they believe constitutes excessive force or misconduct during these demonstrations.''

Promising to investigation thoroughly and hold officers accountable, the department said anyone who believes they were wrongfully accused of a crime, unjustly injured or experienced officer misconduct can make a complaint by calling the Professional Standards Bureau, 800-339-6868 or the Office of Inspector General, 213-893-6400 or oigcompl@lapdonline.org.

The post generated lots of push back from other users, some of whom urged anyone who was injured to call a lawyer rather than the police.