LinkedIn has published its fifth annual ranking of the best workplaces in the United States. Here's a look at which employers landed in the top 20:

Count Kroger among the major retailers preparing to ramp up hiring as America recovers from the COVID-19 pandemic.

Kroger, which is already the largest grocery retailer in the United States, will be holding a nationwide hybrid hiring event on Thursday, June 10, in an effort to hiring 10,000 associates supporting retail, e-commerce, pharmacy, manufacturing, and logistics operations.

According to a news release, the hybrid format will allow jobseekers to interview in-store and virtually.

"The Kroger Family of Companies is one of the largest employers in the country and our longstanding culture of opportunity has created an environment where many people, whether it be an intern, stocker, or pharmacy technician, come for a job and stay for a career," said Tim Massa, Kroger's senior vice president and chief people officer.

With brands like Ralphs, Dillons, Harris Teeter, Home Chef and Fred Myer Jewelers under its umbrella, Kroger is one of the country’s largest employers in the country. But Massa said it isn’t enough to just be big: They want to be the best employer.

The company is hoping to entice new workers with its benefits package. Its national average wage is more than $15.50 an hour and Kroger has plans to increase that to $16 an hour.

Its tuition reimbursement program offers up to $21,000 for both part-time and full-time employees, covering education from a GED to Ph.D.

Other highlights include Kroger’s training and development resources, health and wellness partnerships and the perks and discounts employees qualify for. 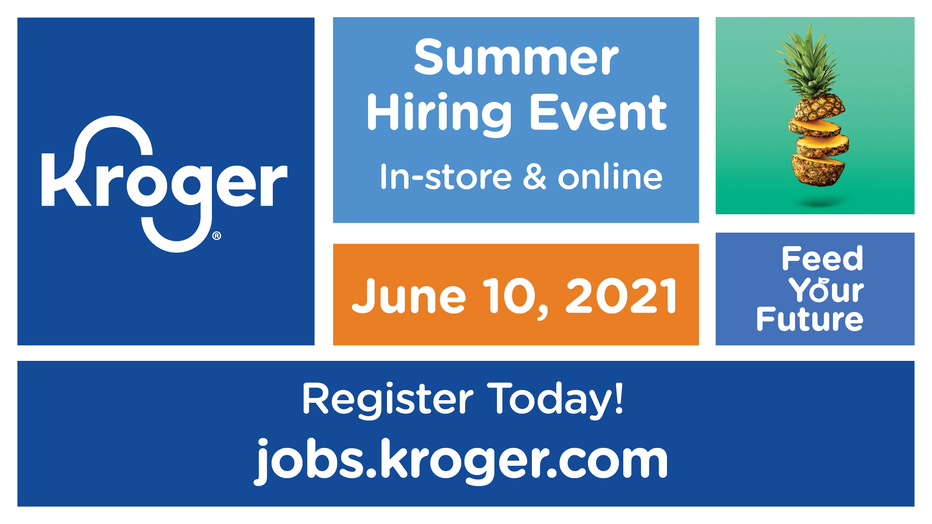 Kroger, which is already the largest grocery retailer in the United States, is hoping to hire 10,000 more workers with its hybrid hiring event taking place Thursday, June 10. (Source: Kroger)

"We are truly driven to be the best employer in America and one of the best places to work, no matter your skillset, role, or ambitions," Massa said. "We want to meet our associates where they are and provide them with tools and pathways to grow as individuals and with our organization because the jobs of the future will grow and evolve just like our business. Today's growth-minded associates will deliver tomorrow's solutions for our customers."

The event is open to all high school and college students, as well as veterans, retirees and people with disabilities. Anyone interested in working for Kroger is encouraged to apply at jobs.kroger.com.