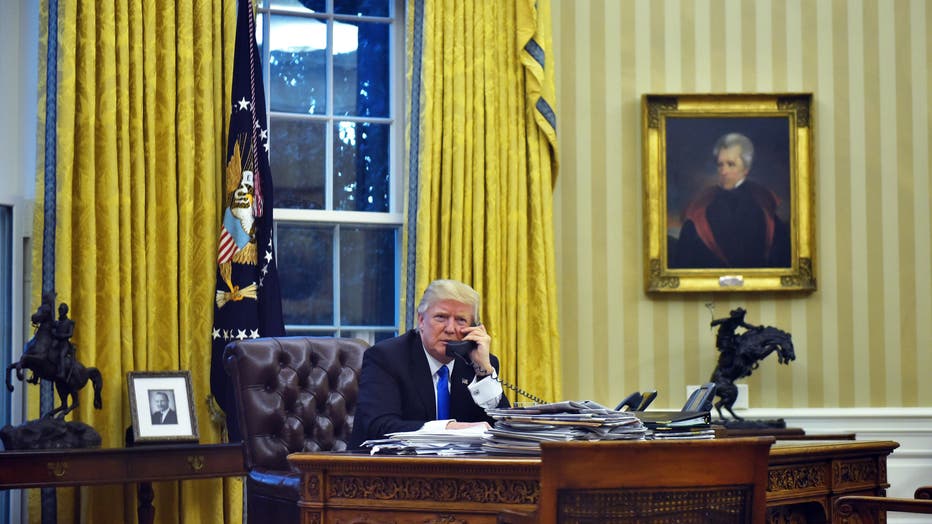 US President Donald Trump speaks on the phone at the Oval Office of the White House. (MANDEL NGAN/AFP/Getty Images)

President Donald Trump personally urged Kansas residents to support a GOP candidate, Ron Estes, in what may be a close special election taking place in the state on Tuesday for the seat of former Representative Mike Pompeo, who is now CIA director under President Trump.

“On Tuesday, Republican Ron Estes needs your vote — and needs it badly,” President Trump said in a recorded robocall to voters, The Wichita Eagle reported on Monday. “Ron is a conservative leader who's going to work with me to make America great again. We're going to do things really great for our country. Our country needs help. Ron is going to be helping us — big league.”

The special election, in which Estes, Kansas Republican party treasurer, faces off with Democrat James Thompson, represents the first time voters can “take out their frustration” with President Trump at the ballot box, NPR Politics Editor Domenico Montanaro pointed out Tuesday.

Though Estes is favored to win, some political analysts predict, the significance of the race is certainly known to President Trump and other Republican party leaders. The National Republican Congressional Committee came through with a last minute ad buy, and on Tuesday morning, President Trump tweeted about the vote.

There is no current polling data on the race, though a March poll from Washington-based Lincoln Park Strategies put it at 56 percent to 32 percent in favor of Estes.

The 2018 midterm elections — during which all 435 seats in the House and more than a third in the Senate will be at play — are more than a year away, but the pressure the Kansas special election and others already appear to be exerting on the GOP illustrate the gravity of the coming contests.

President Trump is an unpopular president, and as of his inauguration was liked less than any other incoming president since the 1940s. Couple that fact with the knowledge that millions of of eligible voters chose not to vote in the 2016 presidential election — and that in 14 states more voted in down-ballot races than for president — and the sources of much of the anxiety analysts are seeing around the looming midterms grow clearer.

These factors also exist against the backdrop of an aggressive Democratic campaign to build a majority in Congress. As of now, Democrats will need to only secure three seats to control the Senate; Republicans will need eight to lock down a filibuster-proof majority. More Democratic Senate seats (25) than Republican seats (nine) will be at play in 2018. But, as some analysts point out, “out” parties — those not controlling the White House — tend to see more support in midterm elections than “in” parties in Congress.

“Our enemy right now is complacency”

Backed by the top Republican in the country, President Trump — who won Pompeo’s now-contested district by nearly 30 percentage points in November — as well as other GOP superstars like Texas Senator Ted Cruz, Estes will likely win the Kansas special election race on Tuesday.

But before the Republicans can take even the slightest comfort in the win, Cruz’s words at a campaign event in Wichita could be especially worth heeding: “Our enemy right now is complacency,” the 2016 Republican presidential hopeful told supporters Monday.

The caution is one relevant both in Kansas and across the country, as contested political seats — from village mayorships to congressional slots — find themselves increasingly subject to national attention, in the form of big donor dollars and endorsements from establishment figures.

Democratic candidates, even some unlikely contenders, are also receiving major support from the Democratic party, which is working to identify crucial contests and “unrig the map,” through a concerted redistricting push. Expect big money to be funneled into local campaigns on both sides. Democratic groups are already seeing “skyrocketing” contributions.

Given the attention some special election races are seeing, though, even when President Trump comfortably won some of these districts in November, it is likely safe to say 2018’s midterm campaigns and contests will be not only critical but contentious too.