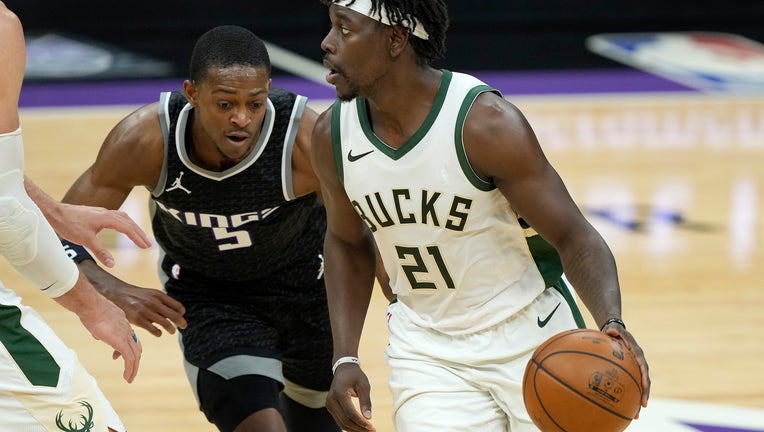 SACRAMENTO, CALIFORNIA - APRIL 03: Jrue Holiday #21 of the Milwaukee Bucks dribbles around a screen set on De'Aaron Fox #5 of the Sacramento Kings during the second half of an NBA basketball game at Golden 1 Center on April 03, 2021 in Sacramento, Ca

As part of the agreement, Holiday declined his Player Option for the 2021-22 season, according to a release.

"Jrue is one of the top guards in the NBA and we are thrilled to sign him to this extension," said Bucks General Manager Jon Horst. "Adding him to our team has made us better on both ends of the floor. He’s an elite defender and an impactful offensive player with the ability to score, shoot and facilitate. Beyond basketball, Jrue and his wife Lauren have already demonstrated the real impact they’re willing to make in our community through the Jrue and Lauren Holiday Fund.

"We’ve worked extremely hard to build a team that can sustain success while competing for championships and Jrue is a significant part of our core. Wes Edens, Marc Lasry and Jamie Dinan deserve all the credit for their leadership and continued commitment toward building a team that will compete at the highest level."

Holiday was named the 2019-20 Twyman-Stokes Teammate of the Year last season, which is voted on by NBA players and recognizes the player deemed the best teammate based on selfless play, on- and off-court leadership as a mentor and role model to other NBA players, and commitment and dedication to his team. In January, he received the NBA Cares Community Assist Award in recognition of his efforts to provide support for those impacted by the ongoing COVID-19 pandemic. Jrue and Lauren partnered with the Wisconsin Women’s Business Initiative Corporation to identify small, women- and Black-owned businesses most in need of assistance.

"We are grateful for the time we’ve been able to spend learning about the Bucks organization, our team and the greater Milwaukee community," said Jrue and Lauren Holiday. "We appreciate how Jon, Coach Bud and the entire staff, along with our teammates and fans, have supported us since the trade to Milwaukee. We have a special group that wants to put in the work and compete for a championship every year.

"We look forward to working closely with our fans and the community, as well as continue to provide more opportunities and resources with our JLH Fund throughout Milwaukee. We’re incredibly blessed to stay here, and we believe Milwaukee will be home for our family for many years to come."

Overall, Holiday holds career averages of 15.9 points, 6.3 assists, 3.9 rebounds, and 1.5 steals in 751 career games (675 starts) and is a career 45.6% shooter from the field, 35.7% from three and 77.9% from the free-throw line. Originally selected by the 76ers with the 17th overall pick in the 2009 NBA Draft out of UCLA, Holiday played the first four seasons of his career in Philadelphia, earning an All-Star selection in his final season.

Holiday spent the last seven seasons with the Pelicans where he averaged 17.6 points, 6.8 assists, 4.2 rebounds and 1.5 steals over 415 games (364 starts) and left as the franchise’s all-time leader in career three-pointers made with 628.

He has also appeared in 30 playoff games throughout his career, making 27 starts, with both the 76ers and Pelicans. In the postseason, Holiday is averaging 17.0 points, 5.5 assists, 4.5 rebounds and 1.4 steals per contest.

The Milwaukee Bucks and Pick 'n Save have teamed up for a third consecutive year to alleviate food insecurity and lack of food access.