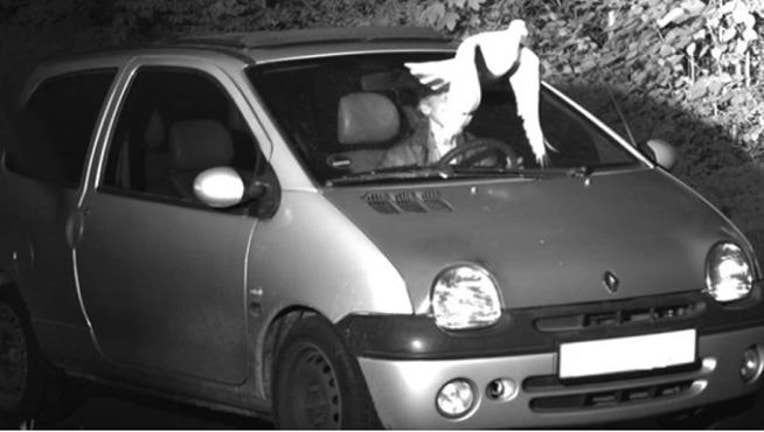 A photo from the Viersen Police Dept. shows the moment a bird unknowingly covered, literally, for a speeding German driver.

VIERSEN, Germany – A man in Germany who got out of a $120 ticket had a little bird to thank — not for telling him anything, but for flying in front of his windshield at the most opportune moment.

Sky News reported on a photo being shared by police in Viersen, which was taken by a camera designed to nail speeders. The car in question was said to be going 33 mph in an 18 mph zone, but it appeared the driver wouldn't pay the penalty for his infraction based on what else was caught on camera — a white dove flying in front of the man's face right as the camera took the photo.

In a tongue-in-cheek statement via the BBC, local police said it "was no coincidence the Holy Spirit" descended from the heavens to help the driver out, adding, "We have understood the sign and leave the speeder in peace this time" -- meaning the guy could not be ID'd and wasn't getting a ticket.

However, a caveat on the intervention of the serendipitous bird, which the cops described as a "feathered guardian angel with apparently carefully spread wings"-- "We hope that the protected speeder, likewise, understands this 'hint from above' and drives appropriately in the future." (Read more weird crimes stories.)