“We’re trying to tell stories that have been forgotten since the American Revolution and tell a more holistic, a more complete story,” said Curator Kate Egner Gruber.

Crispus Attacks is believed to be the first martyr in our history. “He was a mulatto, which means he was a man of mixed race, mixed heritage. He is one of those men who were killed the evening of the Boston Massacre.”

Looking at Paul Revere’s engraving of that massacre, you see Attucks, who not only made the ultimate sacrifice for our country, but also set the tone for the African American sacrifice.

“Something like 50 percent of Virginia itself was enslaved, so that is a very large part of the population that doesn’t always have an avenue out of that institution,” said Gruber.

She said this is where things get complicated.

“So the American Revolution then offers up this moment of choice and so that’s what we’re getting at as we move throughout the gallery here, is that African Americans both free and enslaved during the years of the revolution have choices to make; sometimes those choices are made for them.”

Do they stay enslaved and fight with the patriots or leave and fight for the British loyalists.?

One man highlighted in the exhibit is the last colonial governor of Virginia, Lord Dunmore, who set an example of the options for blacks in this time. He offered slaves the chance to serve, in exchange for their freedom.

That promise is alluring.

“We know that many, many, many men, women and children, regardless of their intention to join the British army, do show up to take advantage of Dunmore’s proclamation and that happens right there in Virginia.”

But records show those who made the move in hopes of freedom were challenged when the war ended.

“What happens to those thousands of African American men, women and children who take the British up on their offers of freedom? We can follow some of those stories through the survival of these two books,” said Gruber.

The Book of Negroes and the Inspection Roll of Negroes. 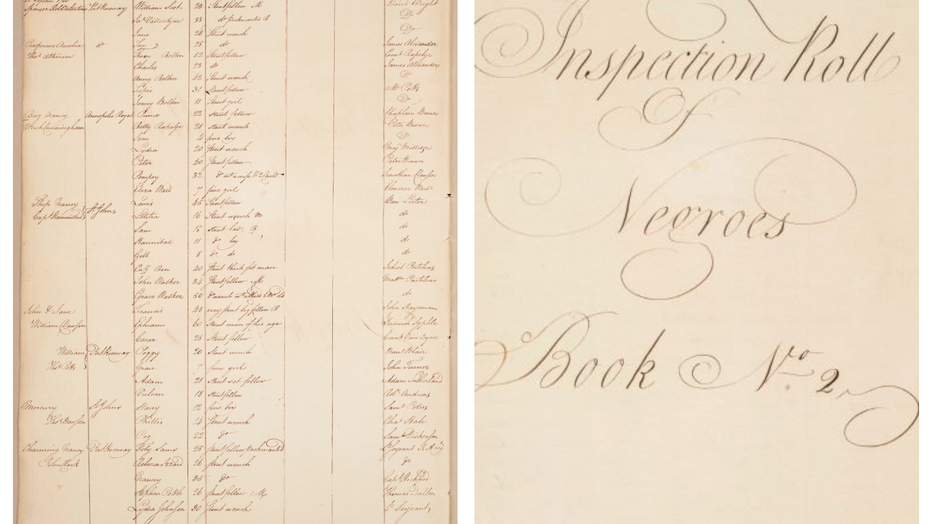 The books are now on display at the exhibition in Yorktown. It is the first time these two books have been in the same room since the 18th century.

This is where a WAVY reporter met Mary Perth, owned by a man in Norfolk, Virginia.

Perth and her family, like thousands of others, have many unanswered questions.

“Article 7 stipulates that because the British lost, they have to leave North America. They have to leave, but when they do leave, they cannot carry off any property owned by Americans. Article 7 specifically says, including Negroes.”

But one man known only as “Mulatto Billy” changes everything.

He joined the British army in hopes of freedom, but then is arrested later for treason.

“And he is actually found guilty and sentenced to hang for being a traitor. It’s actually Thomas Jefferson who intervenes here, and he says that Billy, because he is enslaved, he is not free, therefore he is not a citizen and he has no political allegiance to anyone.”

Although Billy might have been made an example here, it doesn’t mean that every African American after him got the same treatment.

There is so much history on display, but only for a limited amount of time. The Forgotten Soldier Exhibition will remain at the American Revolution Museum in Yorktown until March 2020.

You can purchase tickets and get more information at this link.