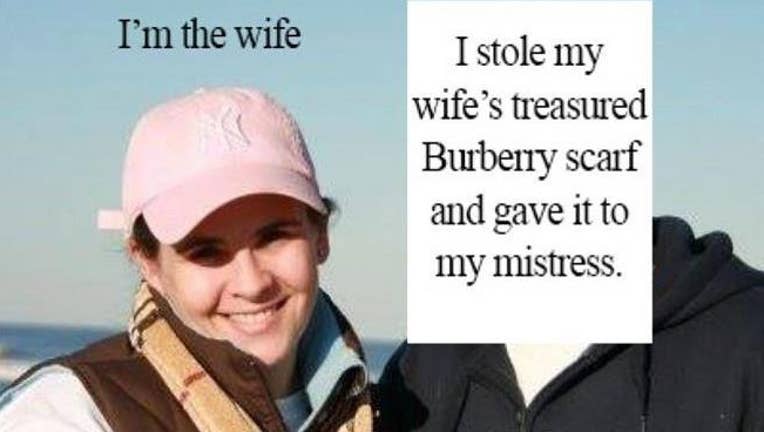 Hell hath no fury like a woman scorned—or the woman's kick-ass friends.

As Canadian women Brooke and Vanessa write on GoFundMe, after about 20 years of marriage and eight kids, their friend Heather's husband (or "WASband," as the ladies call him, dubbed an "A+ term" by Redbook) was found to have been "sowing his wild oats with a neighborhood tart" who became pregnant.

Heather is OK. She moved on, got a tattoo, and has a new job. But she lost more than her marriage—she lost the "one treasured designer item" she managed to own amidst the expenses of raising a brood of that size: a Burberry scarf, which Joe gave to his mistress.

Brooke and Vanessa set out to replace it "so she can rock that motherf---in' scarf like the boss that she is." The $500 goal was intended to ship the $300 scarf to the ladies in Whitehorse, Yukon Territory, where they'd add some other goodies.

Since the campaign's Monday launch, $1,046 has been contributed, along with a sea of punchy, slightly obscene comments. A sampling:

The women say the extra money will help fund Heather's airfare for a girls' trip in Mexico, but Vanessa also explains "it was never about the scarf. The scarf is just a ‘thing’. What this is about is rallying around an incredible woman who has been shit-kicked by life in the past year who didn’t deserve it." (This woman wrote a hilarious eBay listing after finding out her own husband was cheating.)